Previously on Legends of Tomorrow, Sara got blasted by a god and went physically blind but gained foresight, Sara used said foresight to win a beer pong contest to earn the Legends a sip from a chalice that made them immortal for 24 hours so they could use the Loom of Fate, and Astra was taken against her will by Lachesis.

We open approximately 15 minutes after the Legends sipped from the Chalice of Dionysus, and Ava starts to rally the troops. They have 23 hours and 45 minutes as gods to get back to the Loom and get cooking.

But when Ava opens the door, the portal is gone and they’re in actual England. Sara asks where Astra is, and we find out that Astra is on the ship with the other two fates. 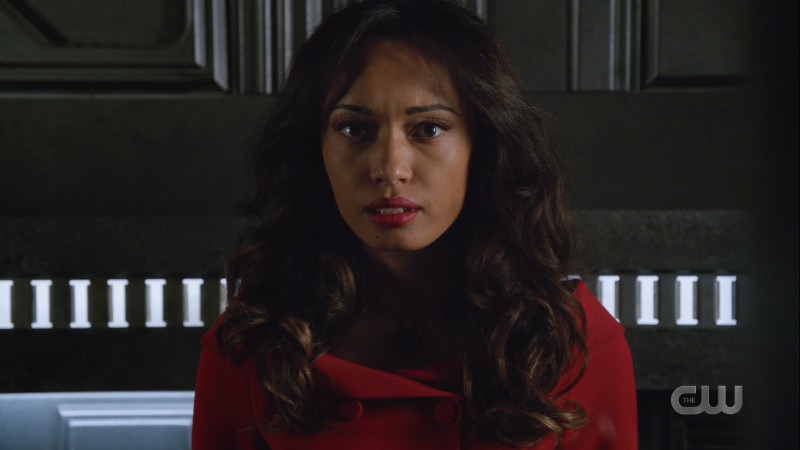 Finally gets everyone to trust her, immediately is forced to do something that makes her seem shady. Cannot catch a break.

Meanwhile, Gary has poofed back to the ship to get some healthy noms for Gary Jr. II, but Gideon isn’t responding to his request. She makes a last yelp, saying she’s been compromised, before she’s shut down.

Constantine doesn’t think Astra would steal their ship, and Charlie is worried it was her sisters that forced Astra’s hand. Everyone is freaking out and Sara tries to call Gideon, but gets no response. 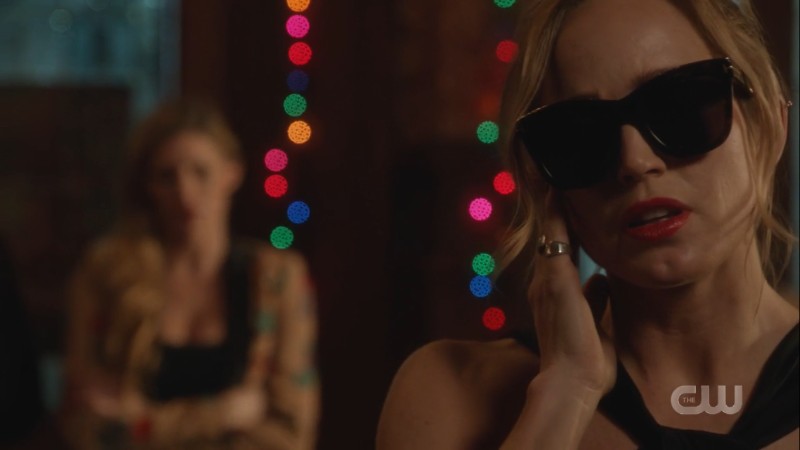 Ava grabs Sara’s hand and she clearly gets a vision but lies about it, saying the chalice is messing with her powers. 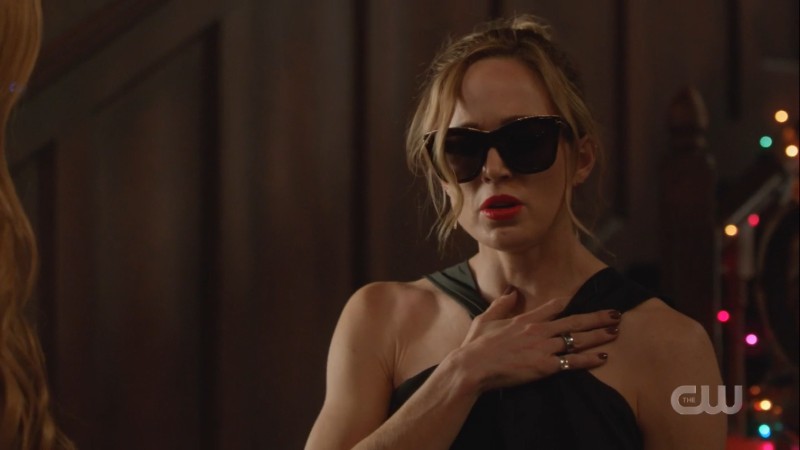 “Based on what I just saw, I…need to cover more skin.”

Ava has a plan, and says there’s a Time Bureau safe house in London that will have a time courier they can use, so Sara gives a rousing speech about how they’re (mostly) superheroes for a day, they can face any obstacle! But, as it turns out, none of these superheroes can fly. So just like a certain kryptonian and billionaire had to earlier this week, this band of Legends has to wait for the bus. 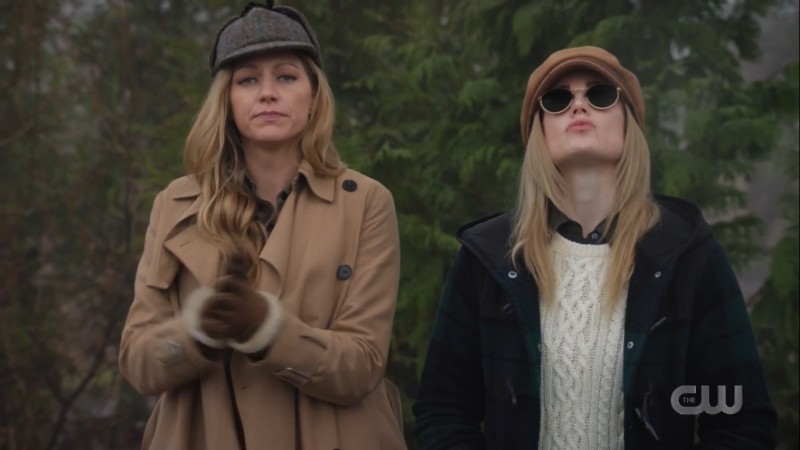 Sherlock Holmes and the Mystery of Why Constantine is Still Here

A bus rolls up and they hail it but they don’t have any money. Sara tries to talk their way on but he needs a fare. So Mick throws him out unceremoniously. Ava apologizes to him but they really have to go.

Lachesis and Atropos tell Astra that she has to use the Loom with them. Astra has some demands; she wants to get rid of prunes, make dogs puppies forever, and bring her mother back to life. Lachesis sends Atropos after the Legends while she tries to reason with Astra. 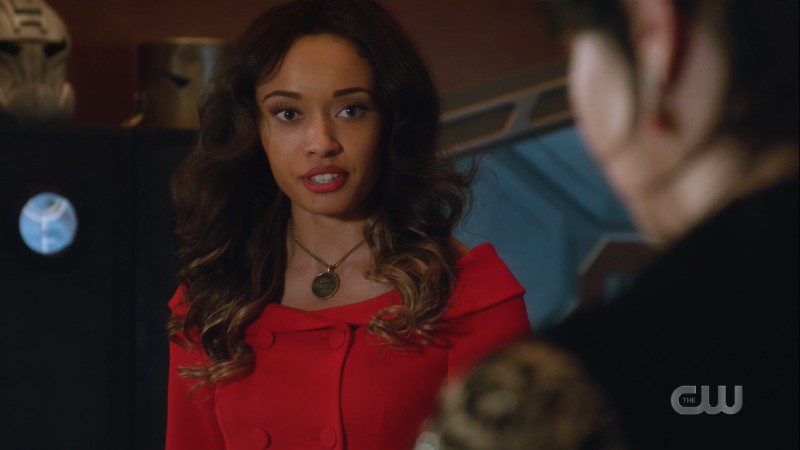 On the bus, Sara asks Ava to run point on the mission. Sara tries to claim it’s because she can’t see the future, and says Ava is who the team needs right now, and Ava reluctantly agrees but says they’re co-captains for life. 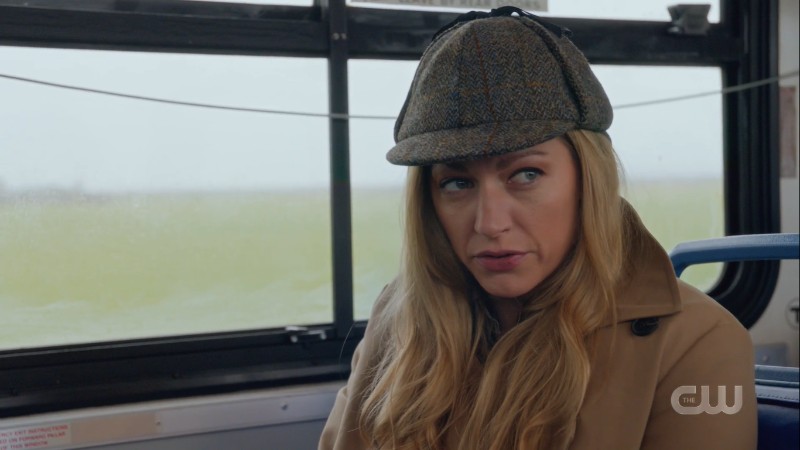 Then they do their classic pinky swear, even though there’s still something brewing behind those sunglasses. 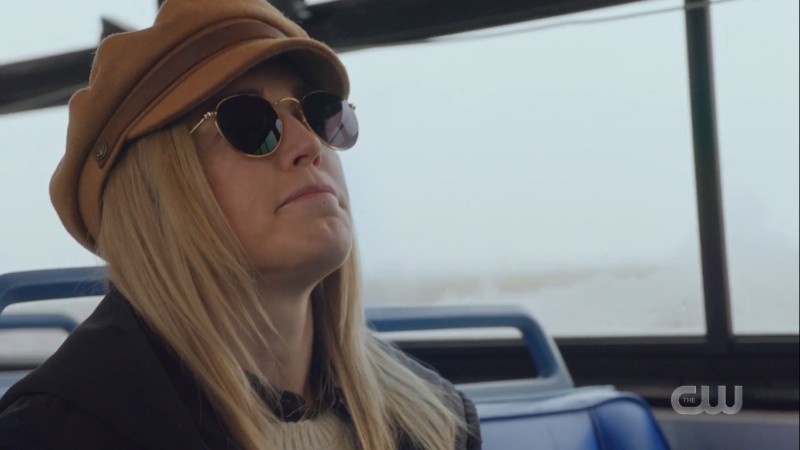 How pensive, how sad you seem to be.

Back on the bus, Zari stops Constantine from smoking in front of a huge “smoking will kill you” billboard, because he’s feeling bummed that Astra betrayed them. Zari tells him to pull himself together; after everything they’ve been through, they can’t give up after one setback.

Though…then they hit another setback. Literally, Mick hits a woman with the bus. Tis just a flesh wound though, because she immediately gets up. Ava tries to call out to her to tell her to stay down but when the woman turns, the team sees she’s a zombie. 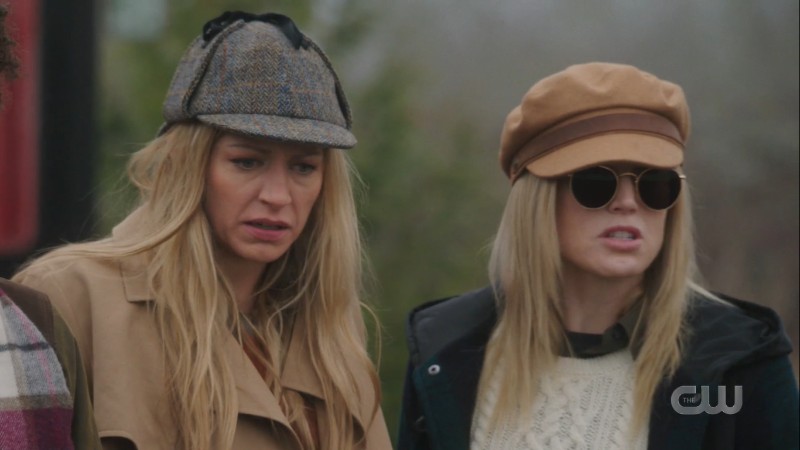 Sara was WAY cuter when she came back from the dead. Every time. Even that one time she was feral for a bit.

And then they notice that this zombie is not alone. And these zombies…can RUN. So the team starts to fight them, Sara and Ava making quite the team, and everyone starts to take them down, except Constantine, who can’t be detected due to his lack of a soul.

Up on the Waverider, Gary, thus undetected by the trio of hijackers, sees Atropos doing some Fate stuff with one of the Loom rings and realizes he’s in danger. He sneaks back and fiddles with some wires to try to get Gideon back up and running, but ends up electrocuting himself instead. Though when he comes to he CAN hear Gideon…AND see her. 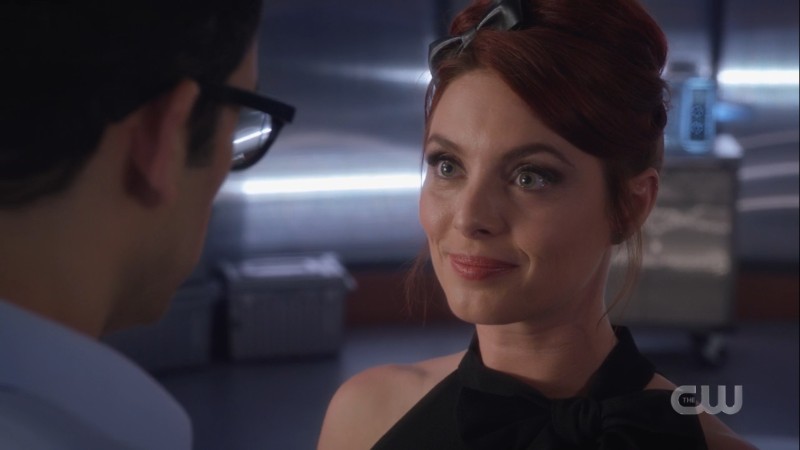 I love the tradition of seeing human-shaped Gideon once a season. LOOK AT HER BOW.

Gideon tells him that they have to get the rings so the Fates can’t use them before the Legends get back, and Gary is down.

Down in London, the bus is totally busted after the zombie fight. Everyone starts to bicker but Ava tells them that they have to work together if they’re going to get through this. And almost immediately, Constantine and Zari break off on their own, much to Ava’s frustration.

Astra is still fighting with the Fates about the Loom, and Lachesis is sick of it. She reminds Astra that if she brings her mom back, it won’t be instantly perfect. That they’ll have to live as humans do. She gives Astra a vision of her in a hospital by her dying mother’s side, losing her all over again. She says, “Life as a human is a life of pain,” and tries to spin it as Constantine tricking Astra just to cause her more hurt. And I suppose as an immortal being with no concept of time, she doesn’t understand the value of years, and perhaps Astra has lost touch with that too, because she convinces Astra that it would feel like an instant. And maybe it would. But Astra hasn’t met Lena so she doesn’t know the value of pain, and how inevitable it is. 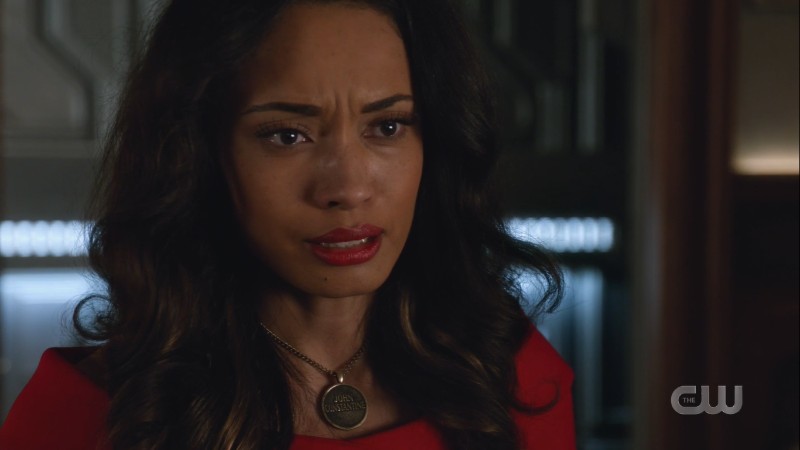 “What if we use the Loom to make it so no one can hurt anyone else ever again.” :Lena appears out of nowhere: “NO!”

Elsewhere on the ship, Gary and Gideon watch Atropos throw knives and are rightly in awe of her. But they need the rings, so Gideon says she’ll distract Atropos and…HOPS off. Thus revealing that possibly Gideon isn’t Gideon at all, but Gary Jr. II.

On the broken bus, Ava tells Sara that she’s frustrated because Zari and Constantine left despite her attempts to keep the team together. Sara tells her not to sweat it, that the Legends rarely have a plan, and rarely successfully follow the plan if they do have one. Sara tries to make her girlfriend laugh, saying the Legends are about improv. 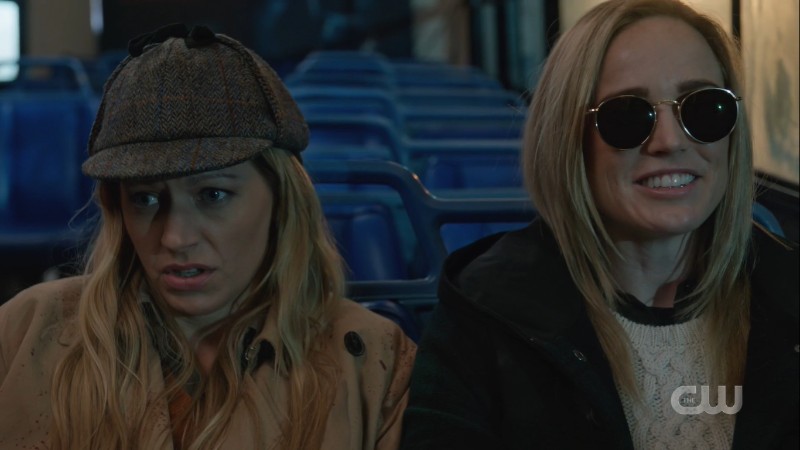 Ava is me whenever I have to be on a bus.

But her heart isn’t quite in it. But before Ava can pry, soldiers show up, and Ava thinks they’ve been saved.

Alas, these soldiers have been battling zombies and don’t quite trust this ragtag group of randos who are covered in blood. Ava tries to reason with them but one easily spooked soldier SHOOTS HER IN THE HEAD.

And friends, I trust this show implicitly, I do. But there was a second where I forgot they were temporarily immortal and I SCREAMED. It was a headshot! She slumped! But then she gets up and the bullet pops out of her head and she is highly offended but otherwise unharmed. 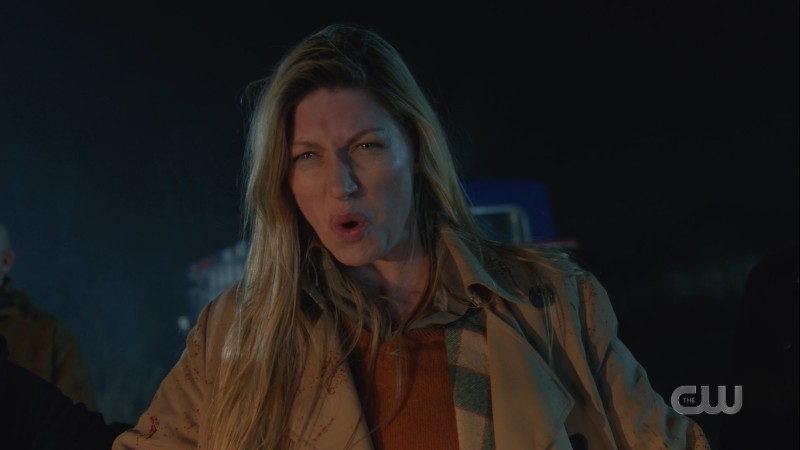 “What are you NEW? We don’t shoot lesbians on TV anymore!”

The soldiers assume this means they are superzombies and round up the Legends and put them in the back of one of their trucks.

Up on the Waverider, the Fates have discovered that the rings are missing, and Astra finds a bit of carrot and knows exactly who is still on the ship. Gary is loving his new team-up with Gideon, and is somehow not even the brains of the operation in his own hallucination, so Gideon is the one who tells him to stop singing and find a time courier so they can get the Legends to come help. 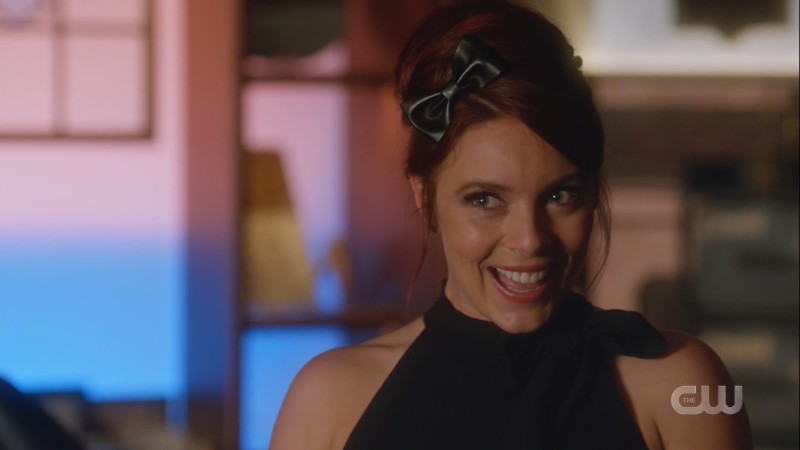 I also appreciated the subtle ways this was definitely Gary projecting a bit of himself into Gideon’s speech.

Constantine and Zari have wandered off to an impound lot to get a car, and end up being cornered by zombies. Zari air totems one to death, but there are more coming. 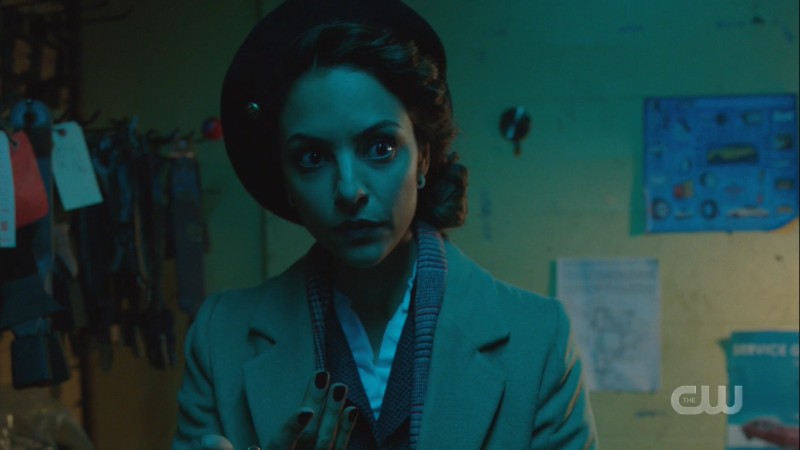 I wonder if the audition process for this show involves trying on a bunch of different styles of clothing from different eras and you only get cast if you never look out of place.

Zari tries to get Constantine to go without her, but he won’t leave her, so he does a spell where he stops her heart and they move through the zombies undetected. Once Zari is awake and alive again, they book it out of there in a cute little Fish & Chips food truck situation.