In the prisoner transport van, Ava gives a leadership speech, trying to do her baby proud, and they start to list off the tools they have at their disposal. 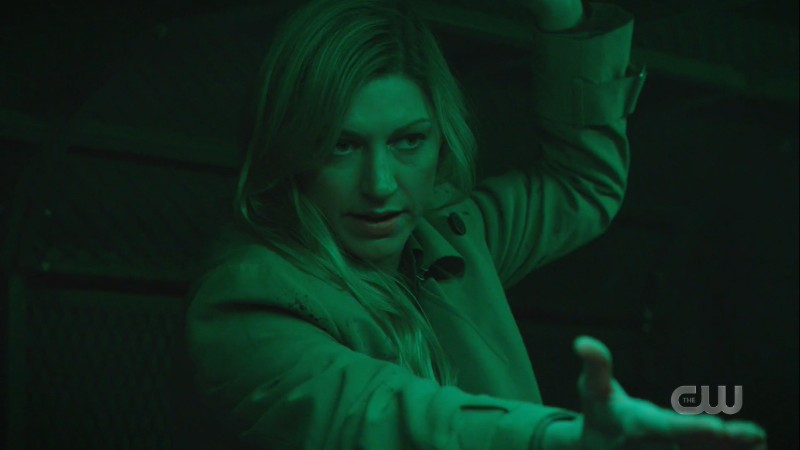 Ava IS a good captain. But she needs her co-captain. They’re better together.

Upon being reminded he’s a criminal, Mick remembers he’s been in a van like this before, and Nate helps him punch open the back door. And since they’re immortal…they jump.

They slowly but surely heal up but still look too much like zombies while their broken bones snap into place for strangers to pick them up as hitchhikers, so they still have a ways to go.

Up on the Waverider, Gary successfully finds a time courier, but he’s caught and cornered by the fates; including Astra, who proceeds to threaten his life.

Luckily for the Legends, they don’t end up having to walk all the way to the safehouse, because Zari and Constantine roll up with an iconic Mean Girls line to pick them up. When they get to the safe house, it’s abandoned because of the zombie situation, and so when they finally find the courier, it’s not charged. A fact that Sara knew before Ava said anything. 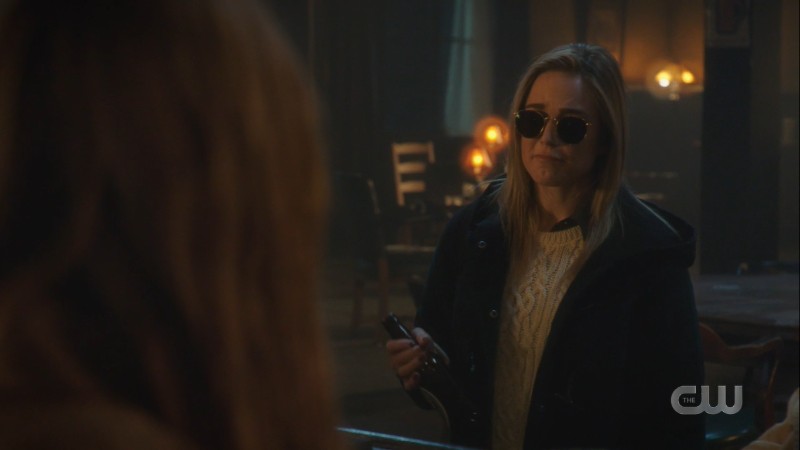 This little resigned shrug hurt all of my feelings.

And Ava can read her girlfriend, so she is officially suspicious. 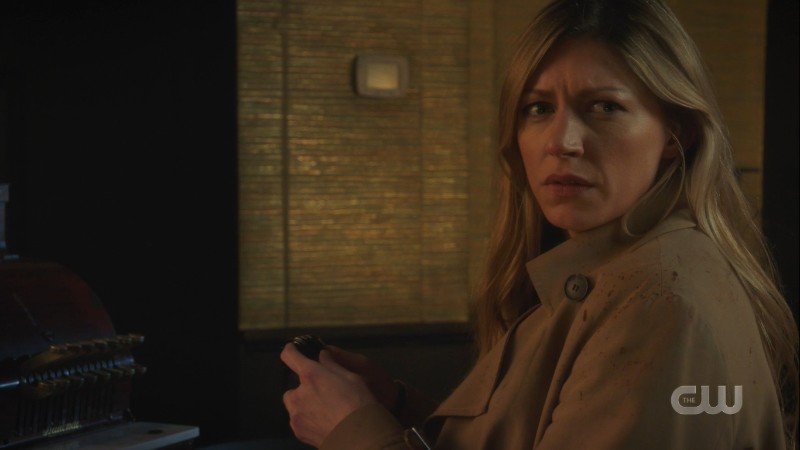 Is there any harder thing than knowing someone you love is hurting but not knowing how to gently get them to tell you about it?

The Legends, having nothing to do but wait, grab some booze and sit around a table, talking about what they would do with the Loom if they had their druthers. Sara is actually very happy flying through time with her friends and her girlfriend, and has already resisted the temptation to bring her sister back to life once, so she’s good as things are. 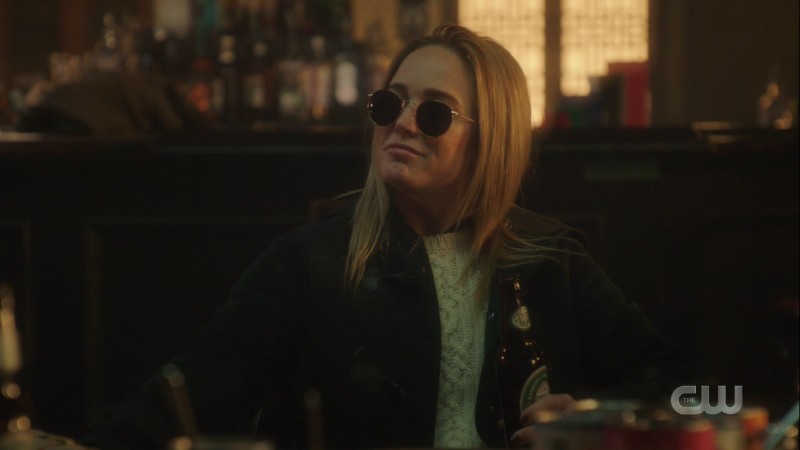 Ava agrees, she’s content. Mick wants to be a criminal again, Zari wants her brother back and a more inclusive world. Constantine says he wants to throw a rager, but at a little prodding from Charlie, he admits he’d also want to go back and do right by Astra the first time around. Everyone toasts, and as soon as their glasses clink, Sara sneaks off for a moment to herself. 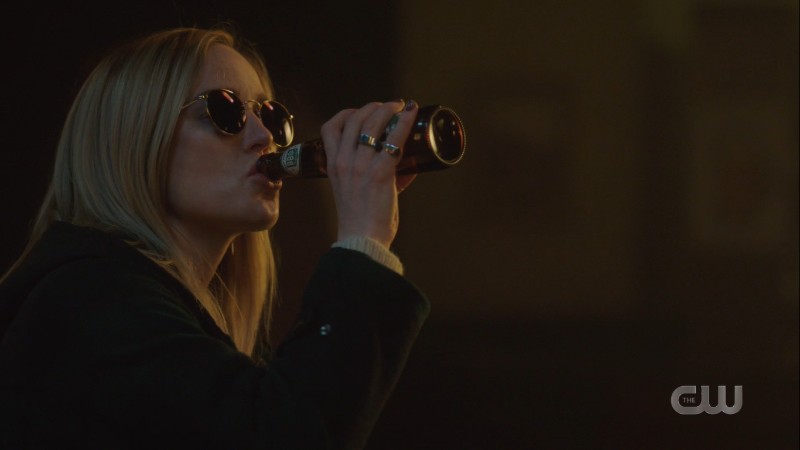 Drinking in a quarantine zone; Sara Lance CAN see the future.

Ava finds her and asks her to come clean; what’s really bothering her? What did she really see this morning?

Sara confesses that she saw herself in this pub, she saw the time courier not being charged, the zombies attacking, Sara dying. This is it, this is the end. This is goodbye. 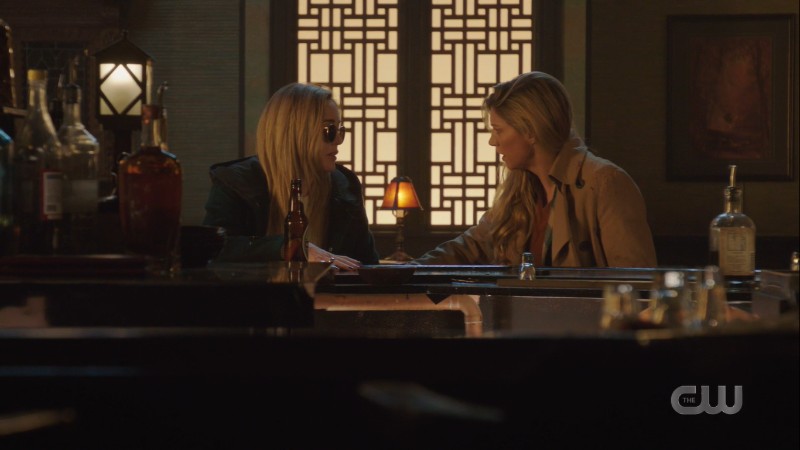 “A breath away from where you are. I’ve come home from so far.”

Ava is horrified by this news, and asks why Sara didn’t say anything earlier, why she’s been saying goodbye all day without telling her, without giving her the chance to do the same. But Sara didn’t want to distract her. Sara brushes her off and says she’s sure that Ava and the Legends will fix it once they have the Loom, but the truth is, Sara couldn’t see anything past her own death. 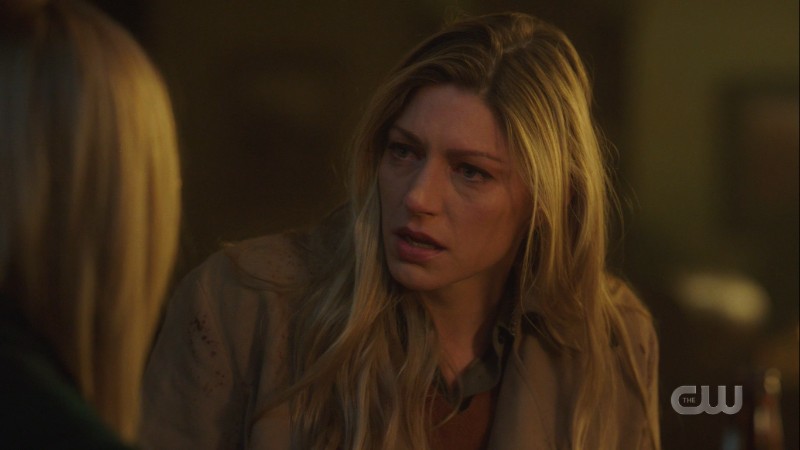 But Sara has faith in her friends. In Ava.

And for a while I couldn’t figure out for the life of me why Sara didn’t say anything earlier. The first time she was having these visions, of all her friends dying, she fought like hell to keep them from coming true. And she succeeded, so she knows it’s possible. But then, when we see things play out later, I realize what happened: The way Sara saw it, she was sacrificing herself so her friends could survive. She was distracting the zombies and dying so Ava and the team could get through the portal. She had no idea what happened after she died. So she thought it was the only way.

Unfortunately for everyone, after all their hard work getting a sip from that chalice, their immortality expires before they can get back to the Loom, and just as a horde of zombies shows up. 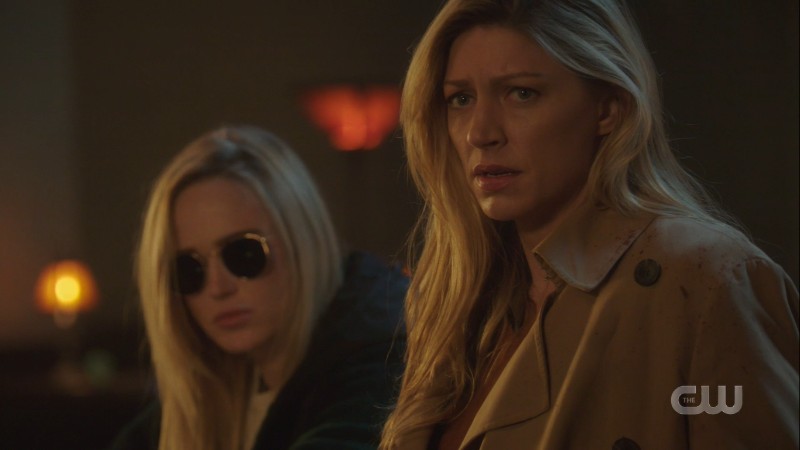 “This is our time. No turning back…Faith falls hard on our shoulders. But legends never die.

Astra’s immortality also runs out, but she’s still on the Waverider torturing Gary and trying to get the rings back after being momentarily distracted by a story about her mother loving strawberries. 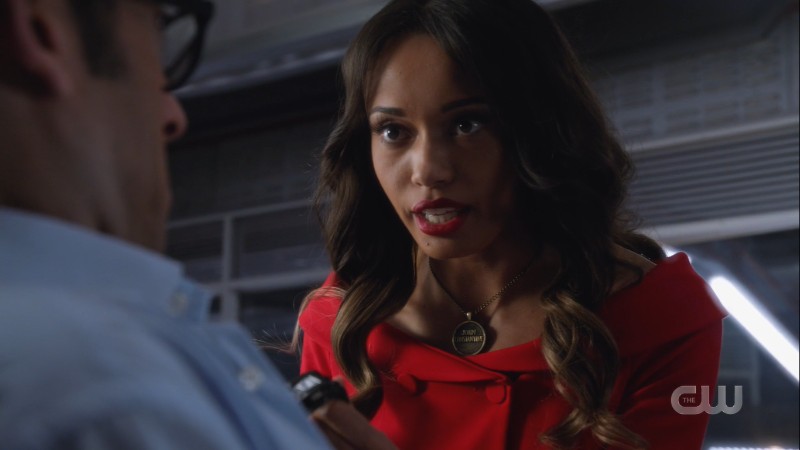 Big week for people being painted as villains making the right choices in the end.

Talking to Gary has changed her mind, and so she quickly asks Gary to teach her how to use the courier and get the Legends here. Unfortunately, the Fates overheard this, and also the clock running out on her immortality means that her usefulness to the Fates has run out. So Atropos kills her dead.

Things aren’t looking great in London either, as the zombies pour in and Sara offers to distract them while everyone else gets back to the Waverider. Ava hates this plan, and so do I, but Sara says “Co-captains for life,” and they kiss goodbye, hopefully not for the last time. 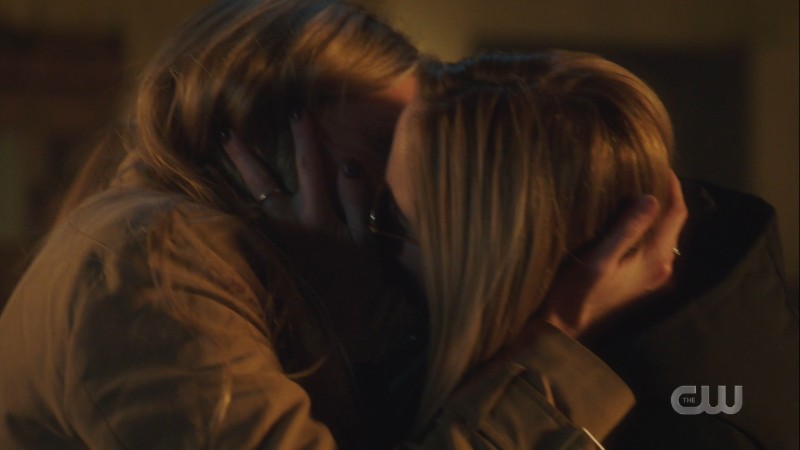 “Pick a star on the dark horizon a and follow the light. You’ll come back when it’s over, no need to say goodbye.”

Sara jumps onto a table to distract the zombies and give her family more time. 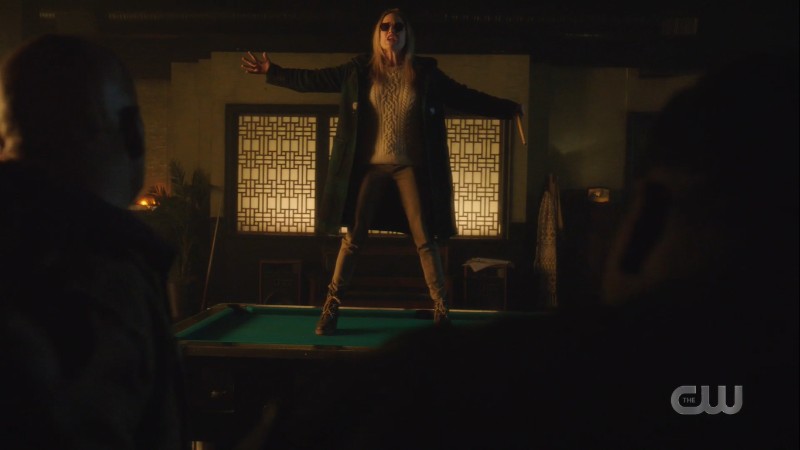 :Jennifer Love Hewitt voice: WHAT ARE YOU WAITING FOR?!

Ava, unable to do anything but wait for the courier to charge and watch the love of her life die, is absolutely distraught. All she can do is cry and scream her girlfriend’s name as she gets knocked down and totally overwhelmed by zombies. 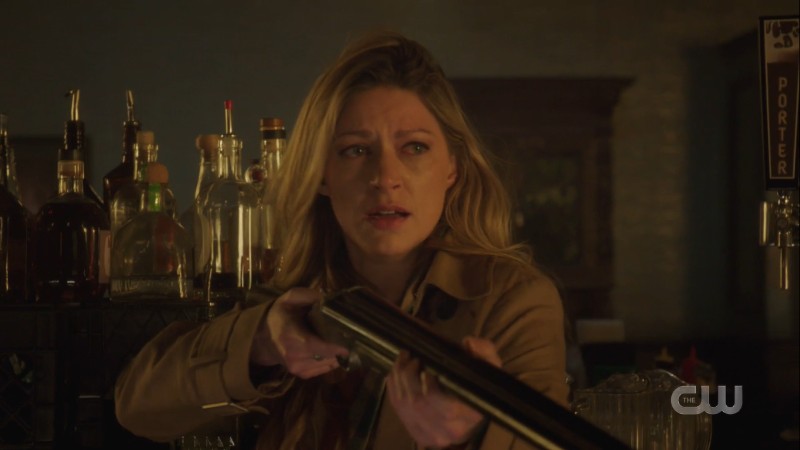 Starting to be bombarded with zombies herself, Ava knows that Charlie is their only hope now. She sends Charlie off to deal with her sisters and fix this, and one by one the Legends die as Charlie runs to the Waverider. Gary gives Charlie the rings as soon as he sees someone he trusts, but Gary gets killed too. Charlie is all that’s left. So she dons her Clotho persona and says they should get to work. 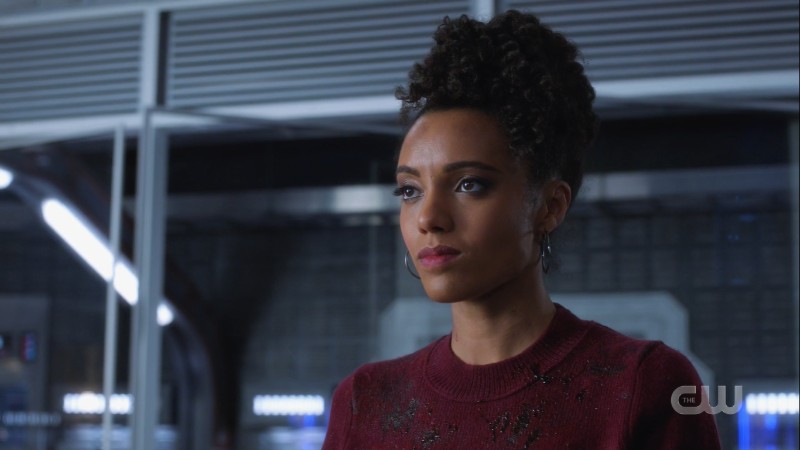 Charlie, you have some gays to unbury. STAT.

Since Supergirl ended this week, there was a moment that I worried this was Legends’ finale too, but luckily we still have two more episodes. And I know that Sara has died oh so many times, and she always gets better, but it still hurts every time. Luckily next week, we won’t be without our dearly departed, because it seems for some reason, the late Legends will be trapped in iconic TV shows, for reasons I can’t possibly fathom but can’t wait to watch.