Hello freaks and geeks! Welcome to this recap of Legends of Tomorrow episode 706, “Deus Ex Latrina” aka the one where Gideon kills Ava. (Kind of.)

We skip the previously ons and dive right in, peeking into the year 2214, where Assistant Ava is telling Bishop that the first generation of Ava clones is almost ready for launch. He’s pleased but she has a follow-up question about the billions of dollars being diverted into a secret project she is not privy to. But lucky for her, he’s ready to show off his project: a Waverider.

She’s not sold on the name but she’s intrigued about why he decided to build a timeship that looks like it was hobbled together from old air ducts. He gives her a tour, which includes introducing Assistant Ava to Wrong Gideon, and Assistant Ava is not impressed by this new AI in Bishop’s life. 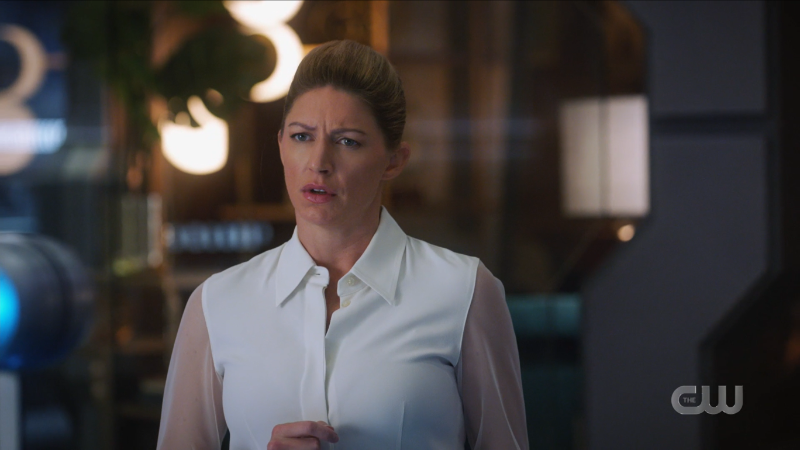 I always say “please” and “thank you” to my technology and Assistant Ava is about to find out why.

Assistant Ava asks what Bishop needs a timeship for and he says he’s going to get revenge on the Legends for kidnapping him, using him for his intelligence, and then messing with his memories. Wrong Gideon gives him the timemaster oath and makes him swear to uphold and protect the timeline at all costs, and then sets a course for whenever the Legends may be.

And speaking of the Legends, they actually have no idea where or when they are. The time machine is fried, Davies is panicking, and none of them know enough about plans to deduce anything. In fact, Gary posits that they could be in a land before time for all they know. 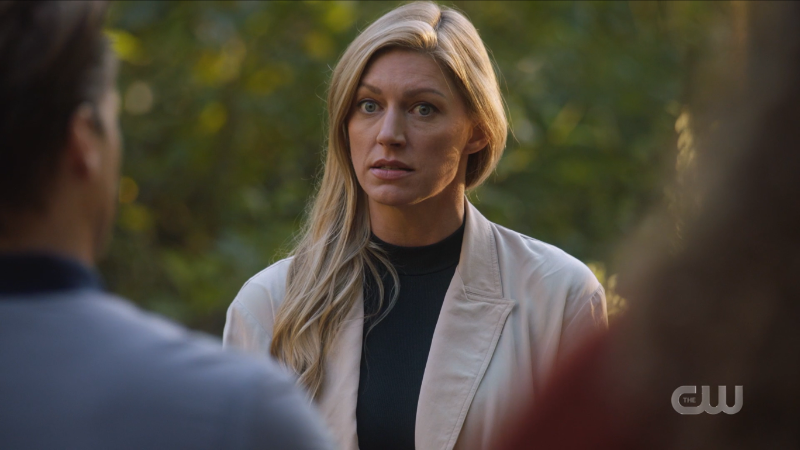 “I swear to Beebo if I see one single ripple in my water I’m OUT of here.”

Since they have no idea where they are beyond “the jungle” they decide to make camp. Ava and Sara do their best to pep talk the team but it’s almost like they can sense a slight downshift in the presence of the Paragon of Hope in the universe and they can’t quite get their spirits up. 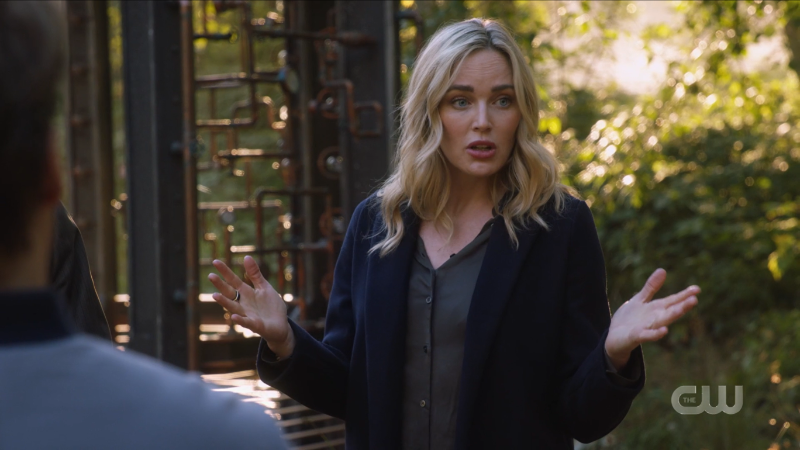 “Where’s a Superfriend when you need one.”

Ava and Sara tell the Tarazis to help Davies fix the time machine while they go off on their own to bicker a little out of earshot.

Nate and Zari are worried about their Captains and call Spooner and Astra in for a sibling-esque huddle about what their moms are fighting about. Spooner reads their minds and can tell they’re getting a little fighty. Sara’s anxiety about not knowing how to protect her team is rising and causing Ava’s stress about the timeline to rise which is in turn triggering Sara’s anxieties about not upsetting Ava and round and round they spin. 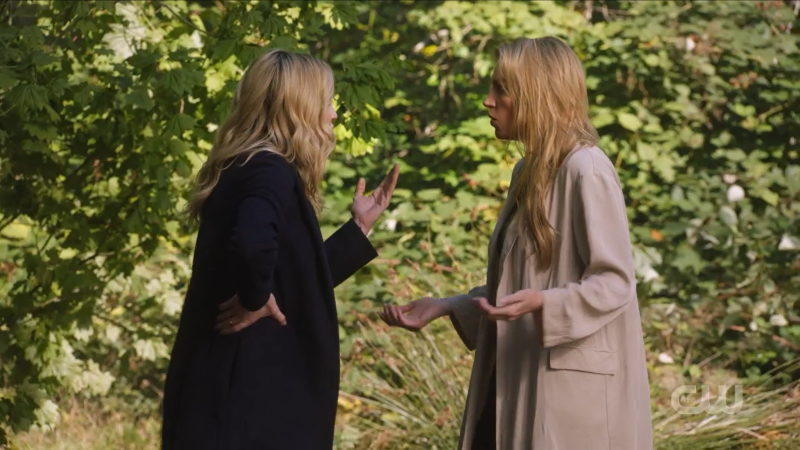 Realizing this is only going to get worse if they’re left alone, Spooner takes Sara to hunt for some food and Astra takes Ava on a hike to gather wood. 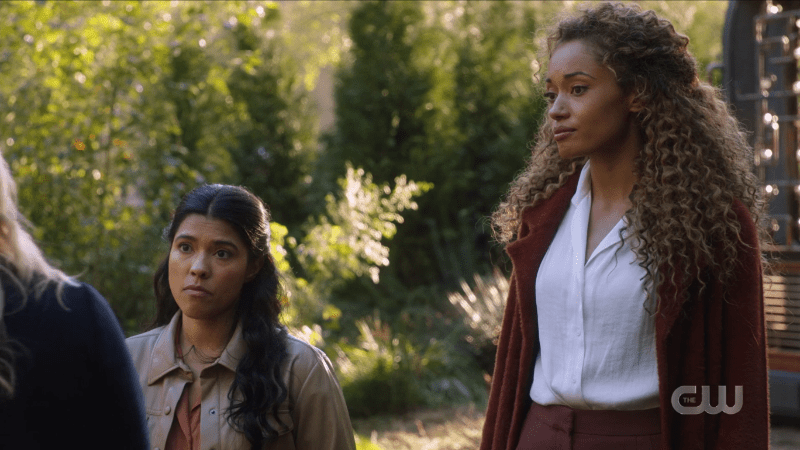 This was confusing for my heart because I still ship this adorable duo but also “keep moms apart til they cool off” gives off sibling energy.

Gary and Gideon start to bug Nate about his relationship with Flannel Zari so he sends them off to gather berries for them to eat with whatever the hunting team comes back with, sure that even these two ding dongs can’t screw up the timeline enough to attract the Evil Waverider if they’re deep in the woods.

In the future, Bishop takes Assistant Ava into the timestream and they get their first alert from 1925 in Odessa, Texas. And then, as we probably could have guessed, because of reasons both timey and wimey, it turns out Bishop was the one who shot at the Legends in the Season 6 finale. Though what maybe we didn’t realize is that he was shooting to kill.

Assistant Ava thinks that felt a little too easy, but Bishop is too egotistical to consider that he failed, so he just starts celebrating, not noticing Assistant Ava’s distinct lack of whooping. 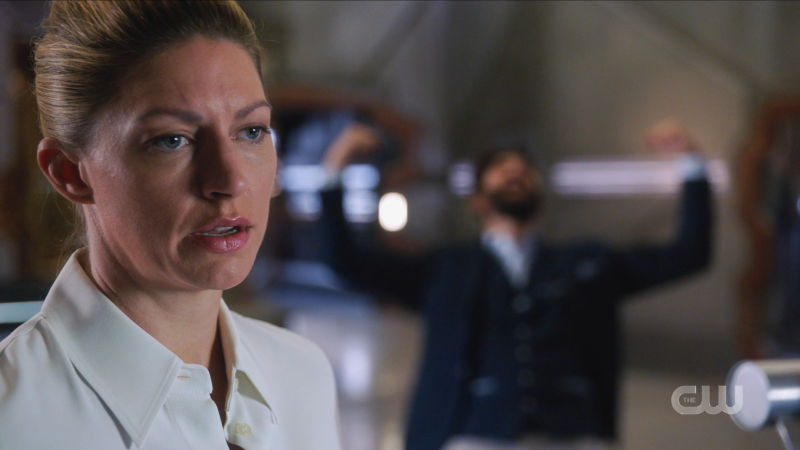 In the jungle, Zari and Behrad go to find Davies, who is looking rather defeated. He’s sure the time machine can’t be fixed and assumes it’s because he was destined to fail, that this is his fate. And speaking of fate, theirs is not looking great based on the danger sign they’re sitting near…but that’s a problem for future us.

On the Evil Waverider, Assistant Ava and Bishop are eating fabricated food, Assistant Ava asking the important question: fabricated from WHAT?? But Bishop isn’t bothered by this unknown, especially once they get another alert about a disturbance in the Timestream, this time about Hoover going missing. He wants to use clone technology to replace him but Gideon says clones are human and thus fallible: just look at what happened with Legend Ava.

Assistant Ava makes a case for #NotAllAvas but Bishop decides to make a robot Hoover instead. 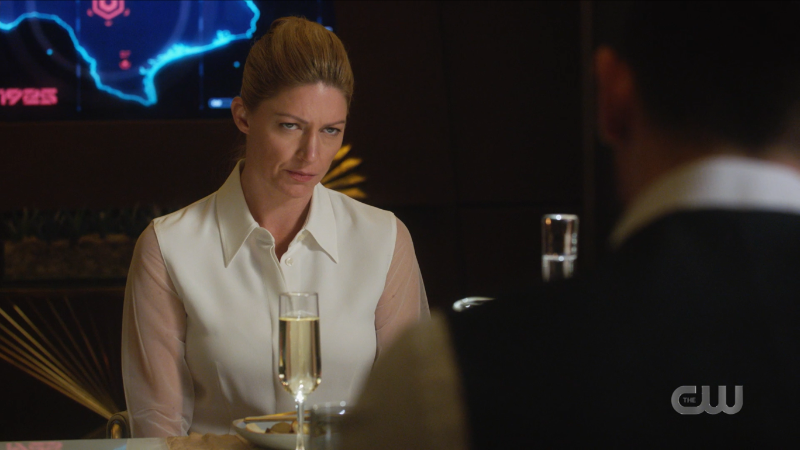 Meanwhile, the real Ava is trying to collect sticks but is too stressed about ruining the timeline to focus. She hates not having all the answers, and sometimes she wishes someone else was in charge. Realizing she just said all the quiet thoughts out loud, she reassures Astra that it’s fine! It’s fine, she’s FINE. Very convincing.

Astra tells Ava that it’s okay if she’s not okay, uses magic to make an axe, and tells her captain that she’s got to let it out. 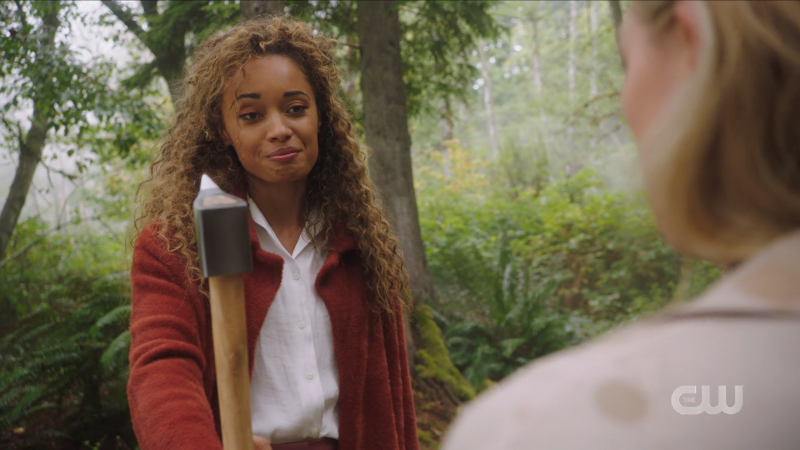 In this metaphor, I am Ava, Astra is Twitter, and the axe is the mute button.

Back in time a bit, Assistant Ava and Bishop get an alert from Wrong Gideon that the Hooverbot died, and on top of that, the Legends are actually alive. They decide to make another Hooverbot, but this one with the Kill the Legends directive, but within 12 hours, it’s in pieces, too. And Edison is dead. Bishop is extremely stressed, and Wrong Gideon is trying to get him to stop going after the Legends because playing whack-a-mole with the anomalies is only making things worse, but Assistant Ava tells Wrong Ava to stop being such a fuddy duddy. So Wrong Gideon decides to lure Assistant Ava to the cargo bay by saying Bishop wants to talk to her, and once she’s inside, she opens the hatch and yeets Assistant Ava into the timestream. Correct Gideon would never!!

Unknowingly very close to a danger zone, Behrad gives Davies a pep talk about how he was lost once, but while he was lost, he found the Legends, and they lead him to find his purpose and be truly happy. Davies does not receive this hopeful message well and is rude to Behrad, making Flannel Zari want to murder him a little. 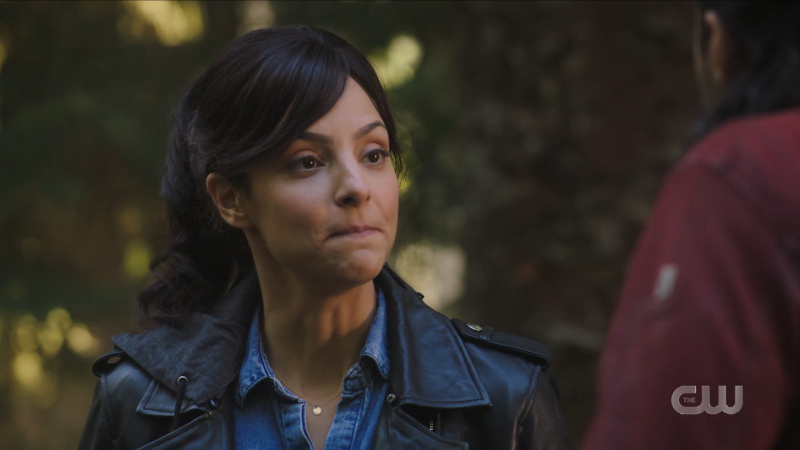 Zari chases Davies down and yells at him but when she goes to grab him to drag him back to the group, he collapses in a panic and she instantly softens. She realizes now he’s not just a dick, he’s just bad at processing his feelings. When she tries to level with him and asks him to focus up, he says that Zari and the Legends don’t really want his help anyway, because he’s useless. He tells her that the last people who depended on him died, and this hits Zari a little too close to home. She tries to tell him that she understands but he won’t listen to her. 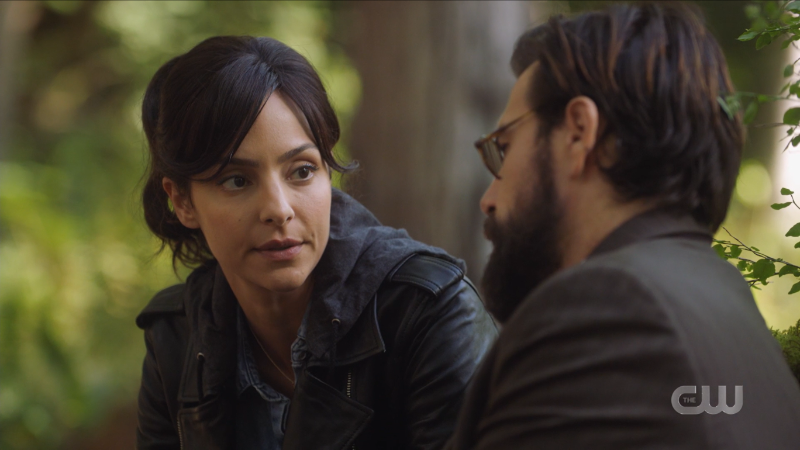 I hope Tala Ashe really, really likes working with Matt Ryan since he’s basically all she gets to have scenes with lately.

Zari explains something that probably was never said to him in the early 1900s, which is that sometimes, talking about what’s wrong can actually help you feel better. He is… skeptical at best.