If you’re anything like us, you can’t get enough of Netflix’s new show “Orange is the New Black.” The show is filled with so many amazing queer characters and women of color that it’s hard to pick a favorite. But one person who stands out is actress Laverne Cox. On the show she plays transgender inmate Sophia Burset. Not only is Sophia’s story one of the most heart-wrenching and her character one of the best, but Cox herself is a remarkable and wonderful person. I recently had the absolute honor and pleasure of taking part in an interview with her and she was every bit as interesting and charming as one would expect. 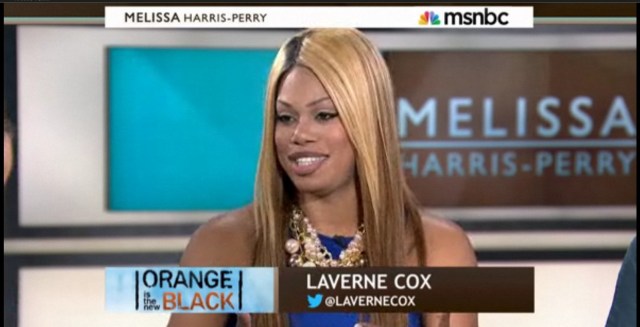 Cox has been involved in tv for about five years, but this is her biggest role as an actress. She talked about what inspired her to go out for jobs like this and why trans* actresses playing trans* women’s roles is important.

“About six years ago, Candis Cayne had, for me, what was a watershed moment on “Dirty Sexy Money,” when she became the first trans* woman to have a recurring role in a primetime series and that moment was such a huge inspiration for me. I really believe I wouldn’t be here if it weren’t for her and for that show just deciding to cast a trans* woman to play that part.

Also it validates my experience. It makes me feel like I am not alone. I think everyone needs to feel a sense of connection, a sense of belonging. And that happens interpersonally, but I think it also needs to happen in our representations in mainstream media so that when we see ourselves up on the screen and we see our stories, we feel less alone, we feel less invisible. I think for trans* folks so often we are sort of overseen, but underrepresented, you know, in a lot of ways that we hear about trans* folks as victims of violence or as criminals and we don’t really get to see the reality and the humanity and the diversity of trans* experience.

I think it’s important for trans* folks specifically, but for anyone really who’s not really seeing their stories told on television to see their stories told up there and see people like them on TV. The wonderful thing about our show is that it provides a platform for a lot of different women who we don’t get to see and hear from a lot to be able to tell their stories through these characters. So as a trans* actor, I know that’s important. I know that visibility matters. I know it’s all really important. So I’m super grateful for the opportunity and I take it all very seriously.”

I asked when she realized the impact that her character was having on how people viewed trans* women.

“Just now. Just kidding! When I started receiving so many messages on Twitter and Facebook from trans* and nontrans* folks alike, when I started reading that people’s ideas about trans* people were actually changing because of Sophia. Being an artist is a difficult path to choose but moments like this definitely make all the rejection and sacrifice worth it.” 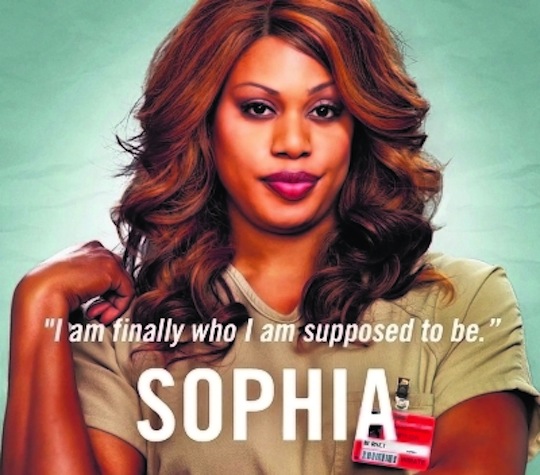 She also believes that “Orange is the New Black” is helping to bring about changes in both the tv and film industry and in society as a whole.

“I think [constraints] come from the industry that has in their mind the idea that trans* women can’t play cisgender women, that people aren’t going to connect to trans* characters or that shows aren’t going have good ratings if there’s a trans* character on it. So I think the industry has to change and I think their ideas have to begin to change about who trans* people are and what it means to have trans* folks playing ourselves and playing characters that are written as trans* on television. Hopefully “Orange is the New Black” will change the game of it in those terms.”

“I think representation is really, really important. Joe Biden, our Vice President, talked about how Will and Grace was his watershed moment in terms of shifting how folks saw gay folks in America. And so we see that the majority of Americans believe that gays and lesbians should be able to get married and the repeal of Don’t Ask, Don’t Tell happened. I think the majority of Americans were changed through media representation. I think it’s important that as we change hearts and minds that public policy follows.”

I also asked if she related to some of the more difficult moments in the show as a trans* woman, being rejected by family, bumping into old friends or having difficulty getting hormones.

“I just wanted to tell the story as truthfully as possible. I believe what artist do is take pain and turn it into art. Some of those moments which are similar to moments I’ve had in real life I got to make art out of and I’m so grateful for that.

I relate to Sophia’s feelings of guilt. She sacrificed everything: her family, her freedom, to be true to who she is and to live as her authentic self. And she’s paid an awful price for that in terms of her family and there’s some guilt around that and she hasn’t been able to resolve fully, particularly her relationship with her son (Michael). And so I can certainly relate to the conflict between being true to myself and that potentially being difficult for the people in my life around me. And this is a piece of the discrimination that she experiences in prison being sort of taken off her hormones is something that – unfortunately I’ve had some moments in my adult life where I’ve been denied some health care because I’m trans* and that was really difficult for me. I was able to advocate for myself and Sophia advocates for herself as well in prison.”

While she does relate to some parts of Sophia’s experience, she also says that there are a lot of differences between her and the character.

“I’ve said often that Sophia is very different from me in that she chose this job (as a firefighter) and she tried to sort of overcompensate, pre-transition, and a lot of trans* women do that. They get into these very sort of masculine jobs and do all these traditionally very masculine things to try to sort of not be trans* anymore. I never did that. I was very feminine and I grew up studying classical ballet, which is, you know, not necessarily considered this big masculine thing. I mean, she’s attracted to women. The only time I’ve kissed women has been on TV and for movies where I’ve been working.”

When asked about what it’s like to be a trans* actress working in Hollywood, she talked about how it can sometimes be difficult dealing with people who haven’t worked with trans* people before.

“I’ve often been the only trans* person in a room and on the job. I’m just myself. The way I handle it is that I try to be as authentically myself as possible and I also try to set boundaries in terms of what can be talked about and not talked about. I like to be open, but I also try to set a tone where inappropriate questions are not allowed to be asked, you know? And I’ll put someone in their place if they overstep a boundary, you know, in a loving way. I feel like sometimes I become very aware that, like, a lot of what I do is to put people at ease. I learned early on – I don’t know if it was because I’m also black – I learned how to put people at ease around me that, like, I’m not a threat, okay.”

Cox said that she’s glad that through the show and through her role as Sophia, people are learning about and talking about issues that have been important to her as a trans* woman of color.

Our unemployment rate is, like, four times that of the national average. The homicide rate among LGBTQ people, the highest homicide rate is among trans* women for the past several years in a row. So, our people, trans* women are dying on the streets and we need support, we need help, we need a focus in terms of the movement on our issues”

Finally, she’s excited to see where her character will go next season.

“I mean, I really do trust and believe in our brilliant writing team. I’ve said that (I’m interested in) her relationship with her son, her relationship with the other inmates, and there’s so many different ways we can go. And so I don’t want to predict or say. I know that it’s going to be fantastic because I know that we have a brilliant writing team and I know it’s going to be amazing. I can’t wait.”