Sometimes it’s important to read for quantity and not quality, which is why the following books are all category 2: trashy lesbian romance. Concentration of sex scenes and/or subsequent U-hauling may vary. 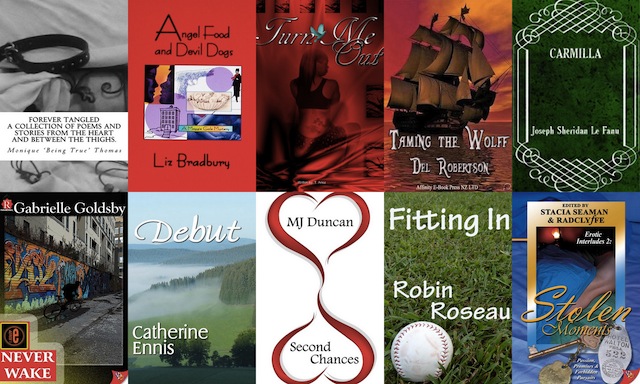 Taming The Wolff, by Del Robertson

Featuring a rogue pirate with the sea as her mistress and a woman abducted and held for ransom, Taming the Wolff is the lesbian version of all those pirate-riddled Harlequins your grandmother possibly read and may have lent you when you were definitely too young and also too gay for them.

Turn Me Out, by T. Ariez

When Angel starts to realize she has feelings for her best friend, Ace, she decides to risk everything by pursuing her as the two overcome challenges to stud/stud romance. (Sistahs on the Shelf also recently posted an interview with author T. Ariez.)

Part mystery, part lesbian romance and more than occasionally hilarious, Angel Food and Devil Dogs is more smut with a bit of mystery than mystery with a bit of smut.

Fitting In, by Robin Roseau

Nicole, an introverted computer programmer with cerebral palsy, meets Alexandra, an athletic beautiful older woman, at a party. The two fly together, but their differences, families and competitive natures threaten to drive them apart.

The entire world falls asleep except for Emma Webster, love interest Troy Nanson, and a scary murderer. Opposites attract, have hot lesbian sex and then try to save the world.

Forever Tangled: A Collection of Poems and Stories from the Heart and between the Thighs, by Monique Thomas

After a bitter break up and eight years apart, sports journalist Charlie Bennett runs into her ex Mackayla when she accepts a guest lecturer position at a small university. Charlie sees their encounter as a chance to live happily ever after. Macayla doesn’t.

Abbie and Tracy run a women’s retreat on a mountain. Tracy decides she needs a change, but will Abbie convince her to stay? This short story was originally published in 1996.

This classic 1872 gothic novella is all about lesbian vampires. Laura’s family takes in Carmilla, who spends most of the day inside asleep, doesn’t like religion, seems to appear in a portrait hundreds of years old and has a penchant for biting Laura on the chest, kissing her and telling her, “You are mine, you shall be mine, and you and I are one for ever.”

sign up for our newsletter
Related:Lists/Top 10sread a f-cking book

Carolyn has written 1110 articles for us.