I’d always told Gloria that I didn’t want to get married until I was at least 28, but on June 26th, 2015, when the Supreme Court ruled same-sex marriage legal in all 50 states, she was ready. I was 24.

“Let’s go to the courthouse tomorrow morning!” she exclaimed, her eyes sparkling, about to burst with excitement.

28 felt like a lifetime away, back then, and I was comfortable with that. Surely we’d have a year-long engagement, too, which would push marriage even farther down the timeline.

“No,” I told her. “I want a whole wedding, like with a dress and our family there.”

I think if I were being more honest, I would’ve said that I wanted to “be sure” she was “the one.” We had limited dating experience and I was scared we were rushing into marriage. I was the only woman she’d ever been with and I’d only had one girlfriend, in high school, before dating Gloria.

Was it too soon? Were we limiting ourselves by only being with each other? What if there were other people left to meet (and fuck) in our lifetimes? What if we were disrupting our own destinies by getting married? 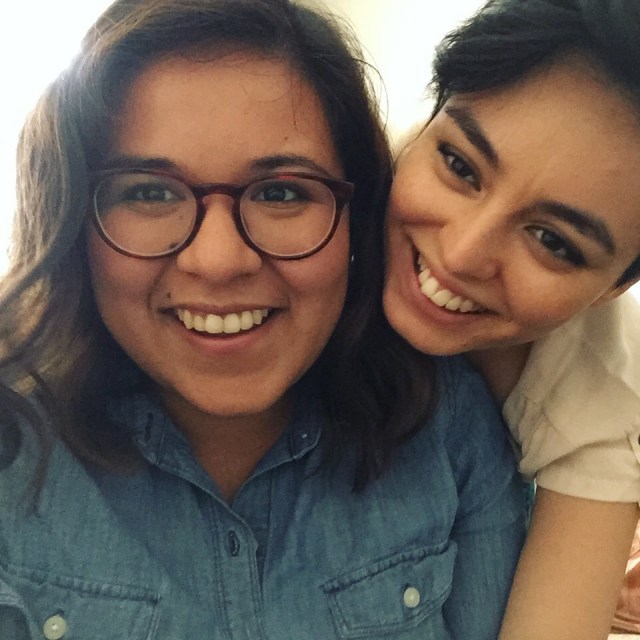 Gay marriage was barely legal when we took this photo in 2015.

It seemed like every other millennial I knew was dating and fucking, engaged in an endless cycle of texting, hooking up, drinks at bars, Instagram flirting, making out and ghosting each other. It was also hard to ignore the whole “love is a lie” rhetoric around us and not internalize it. How did we end up on such a different wavelength than every queer person our age? Are we doing this wrong? I still find Gloria far more interesting than any person I know. I still want my face as close to her face as possible like all the time. I could listen to her and talk to her for hours and not be bored. I learn something new about her every day. We’ve been together for eight years.

28 was a placeholder. I thought it’d give me time to focus on my career, focus on my own goals before thinking about marriage. Marriage sounded so Official, an unbreakable vow. Gloria prided herself on viewing marriage as a government creation, a social construct, a thing not dictated by love. She wanted to get married for practical purposes: insurance, official emergency contacts, cohabitation. I was viewing it through the lens of trash ideas heterosexual people have passed on to me, marriage was the “next big step” in our relationship, a “big commitment,” and “the start” of our lives together. After all these years living and being together, hadn’t we already committed to each other? I certainly was in love with her, we were in a devoted partnership already. So what sign was I waiting for?

Gloria proposed to me at the Dallas Arboretum last November, a month shy of my 27th birthday. It was a Friday and she convinced me to leave work early to go on a date with her. She had just started a new service job and she worked odd hours and weekends. With her new schedule, I rarely saw her or spent time with her. I missed her. Fall is my favorite season and in Texas, it was the most perfect Fall day. She packed us a picnic, a perfect cheese board spread, complete with crackers, jams, sliced pears, nuts and dried cranberries. 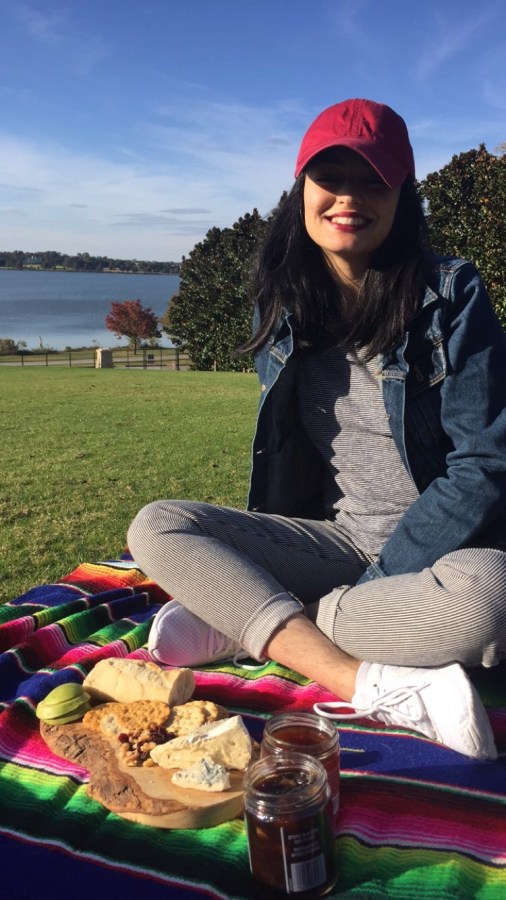 Shout out to Trader Joe’s for this cheese board extravaganza.

We found the perfect spot by the lake to have our picnic. There was a cover band performing at the small amphitheater nearby and we laid our Mexican sarape blanket on the lawn to sit on. I loved every moment of it already. I ate my cheese gleefully, looking over at her, taking her picture. I told her this was the best date ever. After we ate our weight in cheese, she said she had a surprise for me in a brown bag. I assumed it was dessert. I was very excited about the dessert.

I opened the bag. Inside she’d placed a tiny white pumpkin. It was not a cupcake and I was very disappointed.

I just looked at her quizzically, and then back down at the pumpkin. I lifted the pumpkin’s stem where it’d been cut out.

Inside it was the prettiest ring, a simple gold band with a moonstone. I was shocked that I couldn’t stop laughing when I saw it. All I could manage to say was “is it real?” I’ve seen hundreds of proposal videos and I’m always like, “Come on, [the person getting proposed to] could’ve seen that coming from a thousand miles!” But when it’s actually happening to you, you don’t really know what’s going on until they ask you if you want to get married to them, okay!

“It is real, yeah,” Gloria responded. Once she said that I burst into tears. “I love you so much and I fall in love with you more and more every year. Will you marry me?” I laugh-cried for what seemed like a whole minute before I said yes. 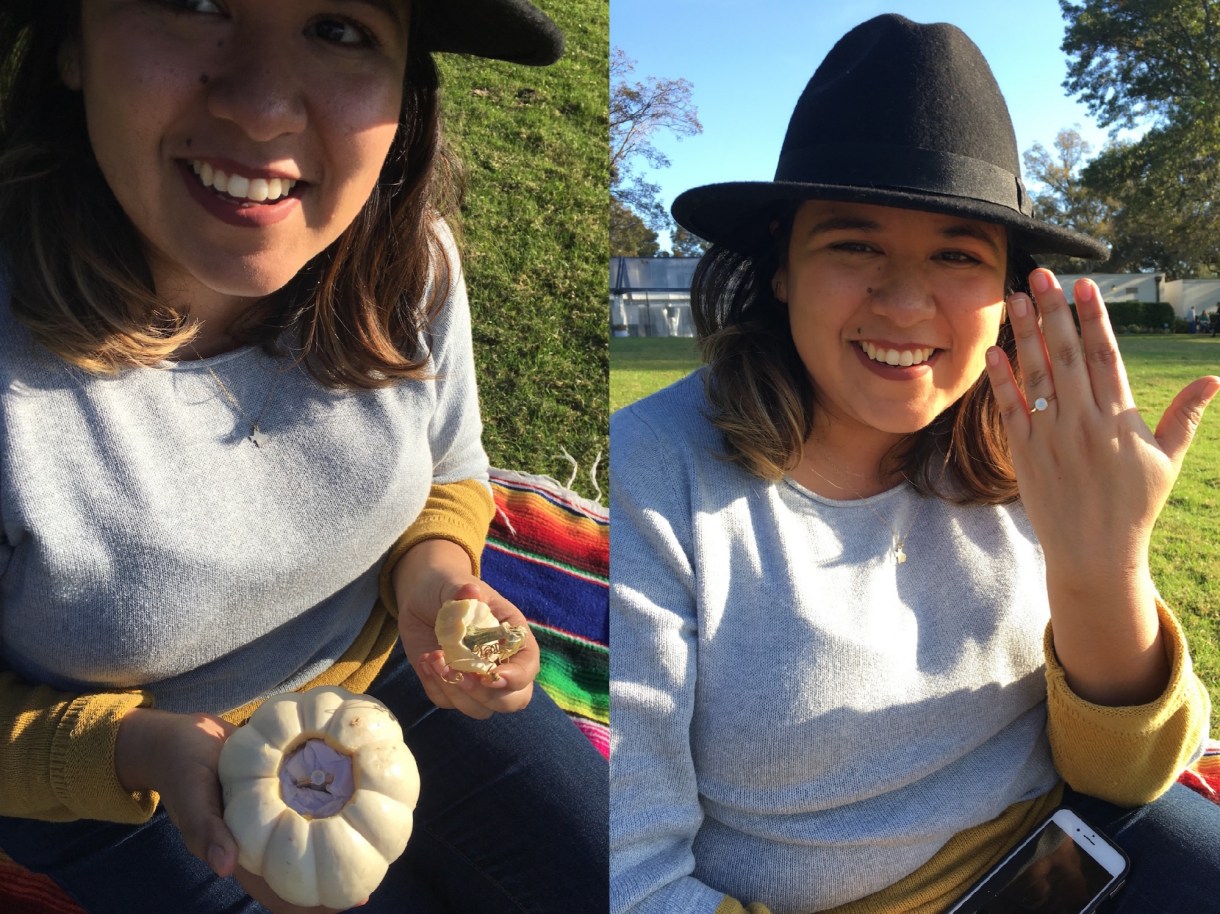 LOOK AT THE TINY WHITE PUMPKIN. I CRIED.

The first test of getting lesbian married in a Mexican family came within a couple of hours of being engaged. After Gloria and I kissed and embraced and reveled in the post-engagement glow, we took a bunch of selfies around the arboretum. Gloria wanted to immediately post all of them and announce our engagement on Instagram. I told her to wait, that I wanted to tell my family personally before they found out on social media first. She waited. I texted my mom, sister and brother, (my dad doesn’t text), and sent them a photo and the video of the proposal. My siblings immediately texted back with a congratulations and champagne and sobbing emojis. My mom took a while to respond to the video and finally texted “That was beautiful. Was it Cinderella themed?” I was relieved. I’d been so nervous about what she would say. Even after all these years being out to her, my irrational fear was that gay marriage would be too much for her to handle.

A while later we sat at a picnic table watching the sunset over the lake while scrolling through and liking all the joyful comments on the photos we’d posted on Instagram. My excitement was interrupted by a text from my mom: “Nobody asked us for your hand in marriage. We were just there. I must approve. Lol.” I felt a sinking feeling in my stomach. I immediately felt defensive and texted, “We don’t have to ask anyone for permission, mom.”

My mom responded, “I know, it is a Mexican custom.” It’s not just a Mexican custom — it occurs in cultures where the patriarchy reigns. I know my mom didn’t intend to be malicious, but my happiness was punctured by her distaste for Gloria sidestepping tradition, a tradition that isn’t even meant for us but for men making a transactional deal with fathers. The suitor asks the father if he can take his daughter from him because she is viewed as property, a potential wife and mother without agency. I didn’t text my mom back because I could feel myself welling up with tears. I knew my mom wasn’t thinking about it in this way. She’s the matriarch of my family and to her family means everything so when Gloria didn’t talk to her about wanting to marry me, she felt disrespected. I understood that and felt anxious about it. But also Gloria didn’t do anything wrong; after all, she’s the one who asked me if I wanted to get married and we’re the only ones who can make that decision.

As Gloria and I drove back home from the arboretum, I felt full and giddy holding her hand. But I kept coming back to my mom’s initial reaction to our engagement. If this was going to be her reaction to our bucking traditions, then I was nervous for how she’d feel throughout the steps to follow: wedding planning and the wedding itself. I wanted her to be happy for us; I didn’t want to admit it but I desperately wanted her approval. I was out to her and shared my day-to-day life with her but sometimes I couldn’t cram my queer, feminist ideologies and political views into our 15-minute phone calls. Or maybe I’ve just been too scared to even try.

Later that night, I texted my mom and really explained to her why her comment bothered me. I explained that Gloria wasn’t trying to disrespect her or my dad but she was upholding our values: we’re the ones who decide whether or not to get married. We didn’t have to ask anyone for permission. Then I pointed out that she wouldn’t have had the same expectation for my brother’s future girlfriend — they wouldn’t want her to ask them for my brother’s hand in marriage.

“Oh ok,” she responded. “I can see that. Thank you for showing me that. That is true.”

It had finally clicked, and I was relieved that she’d gotten the point.

I said yes to Gloria that crisp autumn afternoon because in my heart, it feels right. I feel like I can tackle anything with her by my side, including every stupid doubt and relationship anxiety that bubbles over from time to time. I might not know what lies ahead of me but I know I want to jump in with her by my side. I don’t need to wait till I’m 28 to marry the person I’m already living my best life with; it can happen now.

I want to publicly declare my love for her. I want her to be my person, legally — my wife, even. I said yes because I want a beautiful wedding for us, surrounded by every person who has believed in us and nurtured us; everyone who has seen us for who we are and loved us nonetheless. After eight years, love this strong deserves a damn good party. 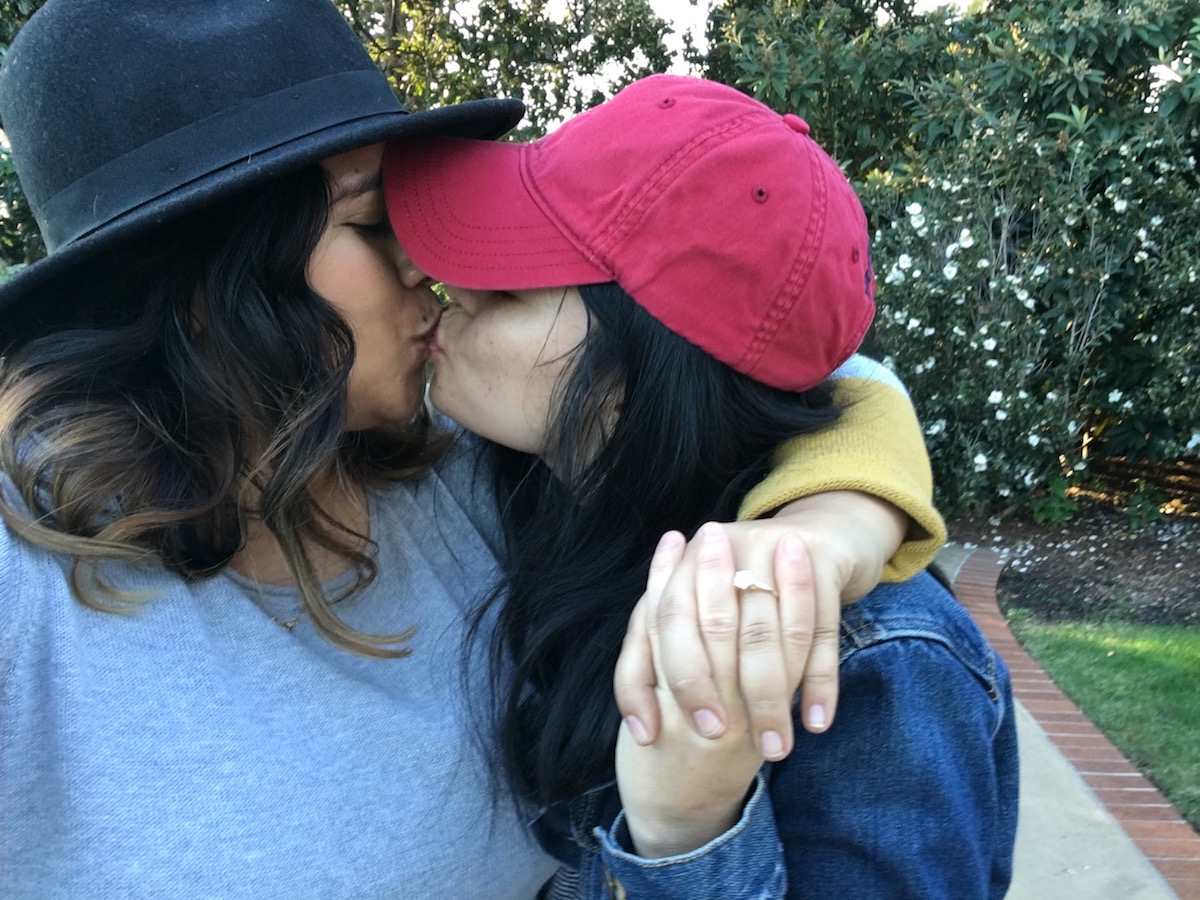 We’re meant to be because look at how perfectly our faces and hats line up.

As I’d learn pretty quickly, when two queer Latinas try to get married — something that sometimes feels like it’s unheard of — there are gonna be some bumps in the road. In many ways, what we’re doing is a first. We don’t have very many models to guide us and to show us how this all works in the context of our culture, our Mexican families, and ourselves. As I’ve learned over the last year, getting married makes you confront shit you haven’t had the courage to slay yet. But we have each other, ideally forever now, and that’s the most comforting confrontation of all.

Stay tuned for the next La Boda Jota, Yvonne’s wedding miniseries, every other Wednesday.