As a Jewish lesbian with hopes and dreams of one day becoming a mom, I feel that it is my duty to tell you that the very first LGBT-inclusive Jewish children’s book in English finally exists! The Purim Superhero, written by Elisabeth Kushner and illustrated by Mike Byrne, was released at the beginning of February and also happens to be a story about Purim, which is exciting because FYI in case your grandma didn’t call to remind you, Purim just happened on Sunday!

So what’s this book all about? It’s a cute tale about a little boy who wants to dress up as an alien for Purim but feels pressured to dress up as a superhero because one of his friends tells him that all the boys in their class are gonna be superheros (what a jerk). His dads are supportive and encourage him to be whatever he wants to be, and eventually he comes up with a solution that not only is adorable but also wins him a prize at his synagogue Purim party. I’m not gonna tell you exactly what he does or what he wins because I don’t wanna ruin the book for you, but I will back up to the part where I said “his dads” because yes! How cool is this! There are gay men featured in this book but the fact that they are gay is not an issue! Queerness is not the conflict! Nope, nothing to see here, just two gay Jewish dads running a perfectly normal and awesome household with well adjusted cute kids who celebrate Purim every year. So casual! 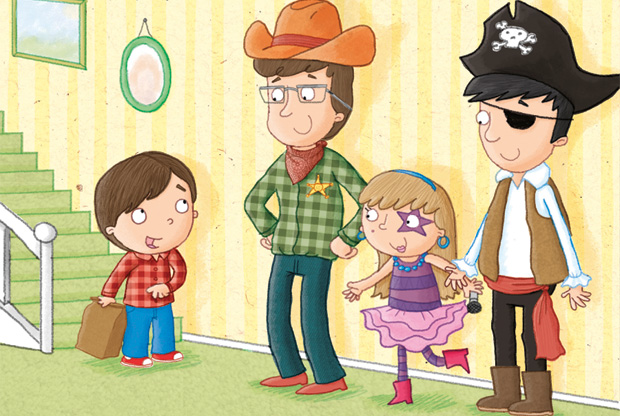 just a jewish family with two dads and two kids celebrating purim, nothing to see here!

I guess it’s annoying that this is so groundbreaking — seriously, how is it 2013 and we are only just getting a children’s book that fits all this criteria at once? — but on the other hand, I can stop being a cynic for ten seconds to acknowledge that it is really cool that this now exists and yes, it is groundbreaking.

This book had the opportunity to get born because Keshet, a national grassroots organization that works for the full equality and inclusion of LGBT Jews in Jewish life, hosted a national writing contest specifically asking people to write an educational Jewish book for kids that featured LGBT humans in the cast of characters but did not necessarily make the fact that those characters were members of the LGBT community the conflict of the story. The point was to create visibility. 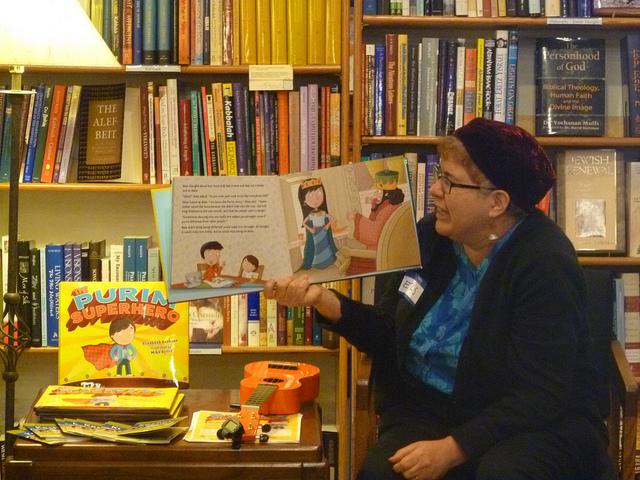 Author Elisabeth Kushner reading her book, The Purim Superhero, at a launch party at Afikomen Judaica in the Bay Area
via Keshet

The author and winner of Keshet’s contest, Elisabeth Kushner, spent nine years as a librarian at a Jewish Day School so she was well-prepared to write her own Jewish story for kids. Kushner released a statement explaining her motivation behind writing the story and what she hopes readers (kids and grownups alike) will take away from The Purim Superhero, and as someone who feels very attached to both my Jewish identity and my queer identity but sometimes has trouble navigating the relationship between the two, it gave me All The Feelings:

I’m very excited that this is a picture book about a kid with same-sex parents where his family structure is not the problem, but is still an important part of the story. I think that kids like my daughter and her friends, and like many of the kids I knew at the Jewish Day School, who’ve been lucky enough to grow up in inclusive and accepting communities, will recognize children like themselves and their friends in this story. And I hope that kids with any kind of family and any religious background who feel weird and self-conscious because they like different things than their friends or classmates—and I think that’s all kids, at some point—will find inspiration and sustenance in Nate’s story.

I can only hope that by the time I’m ready to be a mom, there will be many more children’s books on the market like this one. Who knows, maybe we can even write some ourselves.

Join A+
Related:children's bookshow to live with kidsjudaismread a f-cking book