Kristen Kish, who rose to fame after winning Top Chef Season 10 (Seattle, which was the best Top Chef in my opinion) has just declared her girlfriend on Instagram! Yep, it’s confirmed: Kristen Kish is dating Jacqueline Westbrook, Assistant to the Editor-In-Chief of FOOD + WINE Magazine. Kish posted earlier today:

Kristen was an amazing player on Top Chef who consistently make amazing food and presented herself professionally. She was the contestant you want to be best friends with because she’s smart and an excellent chef but she’s also hilarious. She was eliminated (big mistake! huge!) and sent to Last Chance Kitchen, where she battled against other eliminated contestants for five rounds. She’s the first Top Chef to come out of Last Chance Kitchen and win the finale, and also only the second female winner in the show’s history. 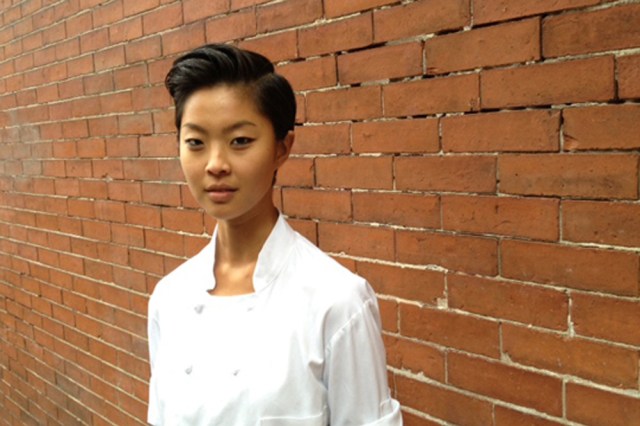 Kish was adopted as a baby from Seoul, South Korea by a couple from Michigan, but mentioned many times during Top Chef that she wanted to take the winning money ($125,000) to go to Seoul and discover her roots. After studying at Le Cordon Bleu in Chicago, Kristen went on to become chef de cuisine at Barbara Lynch’s Stir, a demonstration kitchen in Boston.

She was recruited for Top Chef based on Barbara Lynch’s recommendation, and said of the experience, “The whole TV thing is very foreign to me. Going on the show – some people go on just to be on TV. I did it for the experience.” She left her position at Stir to become chef de cuisine at Menton Boston, another Barbara Lynch restaurant, but recently left that position about a month ago.

When asked what she plans to do next, she says she doesn’t quite know, “But I have to cook,” she said. “I have to. It’s what satisfies me and makes me happy.”

If you’re worried about Kristen falling off the map, don’t be. It was announced via Twitter today that Kristen will be on Celebrity Cruise Line’s Celebrity Infinity “Top Chef At Sea” setting sail on September 19th.

I’m excited to see what comes next for Kristen after seeing her constantly evolving style on Top Chef, where her food ranged from fine French cuisine to delicious-looking onion rings. The audience loved Kristen on Top Chef, so it’s no wonder she’s at a point in her life where she feels confident enough to rebrand herself, take a step back from working in someone else’s kitchen, and come out as a queer woman. Who knows if those things somehow intersected, but doesn’t she look happier than ever? I mean, the caption, “Happy 1 year love. You’ve made me incredibly happy” kind of melts your heart. Good luck on where your journey takes you next, Kristen. We’re excited to have you on our team.

Join A+!
Related:kristen kishThis Is A Coming Out Posttop chef