Although she was covered in tattoos and wardrobe provided good push-up bra, she still made serious lesbian eye contact, evoking a Shane-ness, as she flirted with Dexter‘s sister, Deb. Hot.

.
THE LYNCH CAN DO NO WRONG: 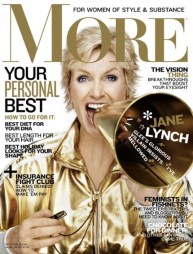 Jane Lynch is More Magazine’s November cover girl. She talks about meeting her wife Lara Embry and sorta-uhauling it straight to Sarasota, Florida:

“A week after meeting her [at a lesbian fundraiser], Lynch flew to Sarasota, Florida, where Embry lived. Just before takeoff, she called Embry and said, “We need to acknowledge how courageous both of us are that I’m coming into town and you really don’t know me. And I’m hopping on a plane to visit someone I really don’t know. So for a moment, let’s give ourselves a little pat on the back.

I shouldn’t say this, but I’d never dated anyone that I wanted to marry. I didn’t think it was going to be out there for me. But the minute we were married, I felt the difference: I felt like I am no longer alone. I got married—and I married a doctor!”

This cute photoshoot awaits inside:

A profile on the man who writes all of Sue Sylvester’s one liners, Ian Brennan offers some very interesting insight into the writing process behind Glee:

“…the three creators of the show — Brennan, Ryan Murphy and Brad Falchuk — each play a different role. Mr. Murphy, the director of “Eat Pray Love” whose television work includes “Nip/Tuck,” picks the songs and comes up with some of the crazier story lines, like football players dancing in formation to Beyoncé’s “Single Ladies.” Mr. Falchuk, a “Nip/Tuck” alumnus, generally handles the scenes that jerk tears.” 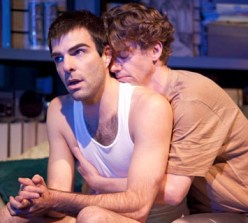 Our boy-crush, Zachary Quinto successfully navigates the “is he or isn’t he” probing of the New York Times:

“…the blogosphere is rife with speculation about his sexuality, no doubt fueled by his support for gay rights and organizations like the Trevor Project. He prefers not to feed that rumor mill with either substantiation or dismissal. He speaks passionately about gay marriage, about “don’t ask, don’t tell” and about the recent wave of gay bullying and suicides. “The fact that these things are such hot-button issues right now, socially and politically, I would much rather talk about that than talk about who I sleep with. I would love to be a voice in this maelstrom of chaos and obsessive celebrity infatuation that says, ‘Let’s talk about something that matters.”

Zach is Off-Broadway in Angels In America where he plays a man who abandons his lover who has AIDS. Check out his “It Gets Better” video. See, it can be done Dana Owens! (@nytimes)

ANYONE BUT ME & VENICE:

Tegan talks to Liz about the #ItGetsBetter Campaign on the latest episode of This Just Out with Liz Feldman. The episode also features a phone call from Tegan & Sara’s mom!