ATTENTION CALIFORNIA GAYS: It’s now confirmed, you can get married now! Well, starting Aug. 18, says CNN, and then every day after that, unless an appeals court says differently later! (@sfexaminer) 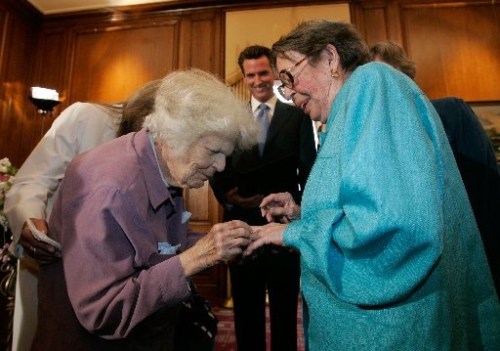 Judge Vaughn Walker ruled today that gays can begin getting married in California. He denied the Prop 8 supporters’ request for a stay of his decision in the Prop 8 trial, at least a permanent stay. There will be no new marriages until August 18th, during which time opponents have the opportunity to appeal the ruling. Read the entire stay decision here. (@latimes)

California Gov. Arnold Schwarzenegger and California Attorney General Jerry Brown both advised Judge Walker that administrative difficulties would not be a sufficient reason to issue the stay (emphasis ours):

“Government officials can resume issuing such licenses without administrative delay or difficulty,” Schwarzenegger’s office said in written arguments to the court.

…Brown also told Walker that possible administrative difficulties should not be used as an excuse for denying gays the right to wed. Brown said his office last year opposed a pretrial request to block Proposition 8 only because the legal and factual issues had not yet been explored.

“That has now occurred,” Brown’s office said. ” And while there is still the potential for limited administrative burdens should future marriages of same-sex couples be later declared invalid, these potential burdens are outweighed” by the constitutional rights of gays and lesbians. (@sfchronicle)

Officials were on standby for the ruling all day Thursday. Walker had promised to issue it before noon Pacific Standard Time, though he was a bit late with that deadline. LA Mayor Antonio Villaragosa said the city would begin issuing licenses as early as possible, which appears to be in a week. You can watch a live stream of the steps at San Francisco City Hall here, while it lasts. Also, CNN has some interesting live footage here outside city hall.

Today is going to be just like that time Gavin Newsom went rogue and married everyone in San Francisco! Except for this time, IT’S LEGAL! Holler!

If any readers take advantage of this, please send us your photos! You can email sarah [at] autostraddle.com. Also, if you would like to invite me to your wedding, feel free. They are my favorite of all social events.