Jason Collins made NBA history, as the first openly gay NBA player, when he came out publicly via a candid and moving essay in Sports Illustrated magazine, and this is a Very Big Deal. While some male professional athletes, like the MLB’s “Billy Bean,” have come out during their retirements, Collins is the first player from one of the big four U.S. sports leagues (NBA, NFL, NHL, and MLB) to make his announcement while still playing his sport. I found out about the news when Twitter exploded, and even as a person who isn’t very invested in professional sports, I let out an audible shriek because a professional athlete just raised his hand and said, “I’m a 34-year old NBA center. I’m black. And I’m gay.” Welcome to the beginning of the future.

Jason Paul Collins is a 7-foot, 12-year NBA veteran who played as 98 with the Washington Wizards for the 2012-2013 season — he reports that he wears 98 in honor of the year Matthew Shepard was killed. He attended Stanford University and was an All-American athlete in 2000-2001. He’s played on six different professional teams over the course of his career and jokes that anyone in the league can play Three Degrees of Jason Collins. “If you’re in the league, and I haven’t been your teammate, I surely have been one of your teammates’ teammates. Or one of your teammates’ teammates’ teammates,” he wrote in his coming out essay. He’s not an excellent basketball player: In 2012-13, Collins averaged 1.1 PPG, 1.60 RPG and 0.2 APG. He is, however, good enough to play in the NBA, and well-known enough that his coming out is a historical milestone. Also he has been in two state high school championships, the NCAA Final Four and the Elite Eight, and nine playoffs in 12 NBA seasons. He has a twin brother who is also in the NBA, a gay uncle, and he’s single. He first appeared on the cover of Sports Illustrated on March 15, 2000.

He appears on the cover of Sports Illustrated again now, for the May 6, 2013 issue, with a large image of his face next to the headline: “EXCLUSIVE: The Gay Athlete.” Under the title reads a summary of Collins’ decision to come out now, and in such a high-profile way:

“I didn’t set out to be the first openly gay athlete in a major American team sport. But since I am, I’m happy to start the conversation.” 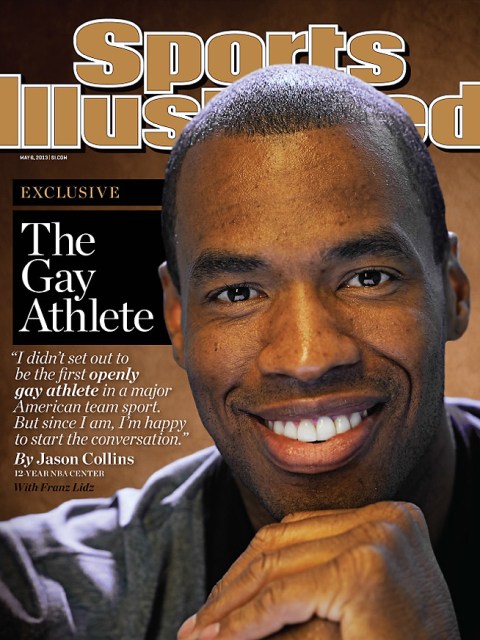 The quote continues off the cover in the body of the article:

“I wish I wasn’t the kid in the classroom raising his hand and saying, “I’m different.” If I had my way, someone else would have already done this. Nobody has, which is why I’m raising my hand.”

I need to say this again just so we’re all clear: This is a huge deal.

Sports is a language that many Americans speak, and it reaches communities that don’t necessarily see narratives about gay athletes, or gay people at all, most of the time. Jason Collins, a high-profile long-term professional athlete coming out as gay is important. People look up to professional athletes. Kids look up to them, certainly, but grown ups do too. Have you ever seen grown ass adults paint their face, put on their lucky underoos, and stand in a crowd for hours over and over again cheering on anyone other than a professional athlete? Nope. Sports do something to people. The exhilaration of the win, the hope that a losing team will somehow turn it all around, the camaraderie of feeling like you are a part of something bigger than yourself. People really like that stuff. So when a person who has had a big role in the world of professional basketball comes forward, with no real precedent whatsoever, and says, “Hey, I’m gay,” it’s undoubtedly going to have a big effect on public consciousness.

Whether you’re a sports fan or not, it’s worth it to check out Collins’ entire essay, because it is everything you might hope it would be. It’s heartfelt, honest, brave, and best of all, matter of fact. My favorite part is when Collins speaks about when he realized it was time for him to come out, and how it felt to come out to himself, too.

Imagine you’re in the oven, baking. Some of us know and accept our sexuality right away and some need more time to cook. I should know — I baked for 33 years.

When I was younger I dated women. I even got engaged. I thought I had to live a certain way. I thought I needed to marry a woman and raise kids with her. I kept telling myself the sky was red, but I always knew it was blue.

I realized I needed to go public when Joe Kennedy, my old roommate at Stanford and now a Massachusetts congressman, told me he had just marched in Boston’s 2012 Gay Pride Parade. I’m seldom jealous of others, but hearing what Joe had done filled me with envy. I was proud of him for participating but angry that as a closeted gay man I couldn’t even cheer my straight friend on as a spectator. If I’d been questioned, I would have concocted half truths. What a shame to have to lie at a celebration of pride. I want to do the right thing and not hide anymore. I want to march for tolerance, acceptance and understanding. I want to take a stand and say, “Me, too.”

Jason Collins coming out is really important if only because other active players haven’t yet, and now maybe more people will, and visibility matters, and we’re still working on getting to a place where it doesn’t. Maybe it always will. I don’t know.

For today, and the coming weeks, basketball fans are going to be talking about the fact that there is a gay player in the NBA. Some big names are praising Collins and offering support, including Chelsea Clinton, former president Bill Clinton, President Barack Obama, The Washington Wizards, Kobe Bryant, and NBA commissioner David Stern. Some kids are going to see that you can be gay and still follow your dreams and succeed. Some homophobic assholes are going to have to consider reevaluating their thoughts on gay people, and some of them will succeed in doing so.

And today Jason Collins gets to be out and open and honest on his own terms. Welcome to the beginning of the future. Because this is, as Collins himself said, only the start of the conversation.