Barack Obama, the President who has already made history for speaking out against and speaking up for action on sexual assault, asking men to be “part of the solution,” announced today that there’s more. The White House and Generation Progress, in conjunction with some big-name partners ranging from organizations to corporations to sports teams to universities, have launched It’s On Us, a high-tech, multi-platform media campaign targeted at ending campus sexual assault. President Obama and Vice President Biden announced the initiative to a room of activists and advocates today, including feminist allies from Congress and survivors who spoke about their experience. 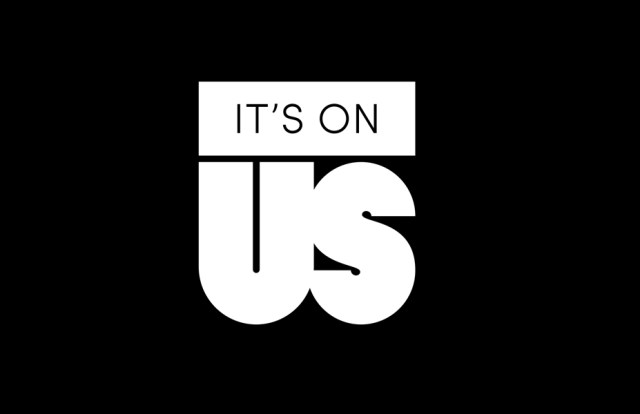 The campaign, which builds on the findings of the White House Task Force on Sexual Assault’s first report, “Not Alone,” calls on young people to commit to being agents of change in their communities. The goal? For people everywhere — including and especially men — to come together and demand an end to sexual violence. “It’s On Us is a cultural movement aimed at fundamentally shifting the way we think about sexual assault,” reads the campaign mission statement. “It’s On Us is a rallying cry inviting everyone to step up and realize that the solution begins with us.”

The entire campaign is structured around the idea that every single person is accountable for our rape culture. Bystander intervention is a big focus, which is a practice hailed by advocates for being key in shifting social norms around sexual violence. By targeting men and endowing individual people with a sense of accountability and responsibility for preventing violence in their communities, the campaign is strategically working to dismantle rape culture, rather than just working to put a band-aid on its consequences.

“Changing our culture. That’s what prevention is going to require,” Obama said at the campaign launch. “We’ve got to have a fundamental shift in our culture… [Laws] won’t won’t be enough unless we change the culture that allows assault to happen in the first place.”

1 in 5 women will be raped or sexually assaulted at college. For too long, fixing the campus sexual assault epidemic is a crisis that’s been laid on the shoulders of survivors and student activists, many of whom have been met with hesitancy, dismissal, and rejection from administrators for attempting to pursue justice or common-sense reform. Dozens of schools are under federal investigation for mishandling sexual assault cases, and dozens more are probably doing just as poorly at taking care of their students.

“Every one of these statistics is a life,” Vice President Biden remarked today. “It’s no doubt that colleges and universities need to step up their game.”

It’s On Us isn’t meant to detract from the importance of those federal lawsuits or the need for greater policy change and legislative action on campus sexual assault — it’s meant to build on it. And the campaign isn’t meant to replace the fiery student activism taking the world by storm — it’s meant to institutionalize it. Despite the efforts of activists across the nation, it’s clear that until sexual assault is taken seriously by everyone — and not just the folks who live in fear of it every day — widespread cultural change will not come. It’s On Us could potentially fill the gap between activists and their administrations, creating cultural demand for the work they’ve been pioneering for years.

This isn’t the President’s first attempt to bring men into the movement to end sexual violence. Obama’s historic White House Task Force on Sexual Assault pledged in April to work closely with colleges and universities in order to gauge the actual prevalence of rape and sexual assault happening on campuses nationwide and laid down a lot of suggestions for administrators looking to implement successful primary prevention programs. Alongside that report, the task force also launched NotAlone.Gov, a portal where survivors of campus sexual assault can find information on reporting, locate support services in their area, and the federal investigations happening on their campuses. The White House’s 1 is 2 Many campaign specifically targeted men in the fight to end sexual assault, urging them to “be part of the solution,” not the problem. Since their election, President Obama and Vice President Biden have repeatedly spoken out about their commitment to ending sexual violence, and they’ve acted on those words by supporting comprehensive legislation like the Violence Against Women Act, inviting sexual assault advocates and activists to the White House, and using the Office of Public Engagement for the greater good in producing these campaigns.

It’s On Us is one more important step to ending campus sexual assault. President Obama and Vice President Biden have shown that they have a real dedication to this issue, and by working with Generation Progress and feminist non-profits like the Feminist Majority Foundation and the American Association for University Women, they’ve shown consideration for the real needs of college women and respect for the work anti-violence activists have been doing. Now, partnerships with sports teams, corporations, and university administrations have given those activists a massive platform and support network for getting more results.

“Everybody has a role to play,” Obama added when closing his speech today. “I’m asking all of you to join us in this campaign… Commit to being a part of the solution.”

The President’s right: it’s on us. So take a minute today to sign the pledge, commit your entire social media presence to the campaign, or download the toolkit and hit the ground running. Don’t worry – the White House has got your back.