THE REAL L WORD: Ilene Chaiken speaks to Emmy Magazine about a new genre of reality television which blurs the lines between fact and fiction:

“When The L Word ended, I received so much feedback from fans who wanted more,” she says, “and, really, the show could have gone on and on. Doing the reality show is a logical continuation of the storytelling and a fresh way to circle back to it seamlessly without taking a year off.”

“Chaiken is upbeat about the franchise, which follows the lives of lesbians. ‘There’s nothing else on television that tells these stories and continues to shatter stereotypes. We can delve into issues that we could only scratch the surface on in the scripted show.’”

CATCHER IN THE RYE: My Adventues Answering J.D. Salinger’s Mail: “Now, his address and his phone number are in the Rolodex on your desk,” [my boss at Harold-Ober literary agency] Phyllis explained. “People are going to call and ask for his number. You think it won’t happen, but it will.” She paused to light another cigarette. “Grad students. Reporters. Just … people. They may try to trick you or manipulate you. They may give you some song-and-dance routine.” She laughed a throaty laugh, then fixed me sharply in her pale blue eyes. “But you can never, ever give out that address. Or that phone number. NEVER. OK?” I nodded and gave her my most professional smile. “Because it’s happened before,” she told me. “I’ve had assistants who just don’t understand.” (@slate)

GIRLTRASH: Be an extra in the movie Girltrash! Angela Robinson, Rose Rollins, Mandy Musgrave, Michelle Lombardo, Clementine Ford HAVE I DROPPED ENOUGH NAMES FOR YOU YET. This is happening Wednesday & Thursday only so get to it! (@yourdailylesbianmoment)

V FOR VENDWHATTA?: Natalie Portman was ”terrified’‘ about having to kiss Mila Kunis in their new movie ‘Black Swan’ and worried their steamy encounter would overshadow the whole film. (@contact music) 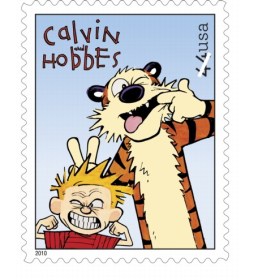 RIHANNA: Rihanna visited The Ellen DeGeneres Show and performed her hit “Hard” and it was hot! (@bgg)

CALVIN AND HOBBES: Via ONTD, best blog evah, we found these Cleveland Plain-Dealer pieces on Calvin & Hobbes! Bill Watterson retired the strip 15 years ago and lives now in Cleveland Ohio, right in the heartland of America. Our Calvin & Hobbes love was well documented in Taylor’s first Technostraddle Open Thread, so you can imagine our delight to read 15 Years Later, Fans Still Pine for Calvin & Hobbes and this interview with Bill Watterson. Then you should probs go get The Complete Calvin and Hobbes for your girlfriend for Valentine’s Day. (@clevelandplaindealer)

TEGAN & SARA: Tegan & Sara will be touring Australia! This is gigantic news that will change the world, especially for our Music Editor who lives in Australia! The twins will play the continent, country and island in May, with tickets going on sale on February 12th. I hope they pack lots of books for the flight, it’s super long.(@defamer)

Want more Tegan & Sara? Perfect, ’cause they hosted NewNowNext music on Sunday night and we got video to prove it!

Here’s the behind-the-scenes video from the shoot by Annie Lebowitz.

GAGA: Lady Gaga declined to participate in the “We are the World” singalong, and most of the Jezebel commenters seem to think that’s ok for a lot of reasons like “I’d do the same thing. These charity sing-alongs are incredibly tacky.” We think it’s okay too. She’s done a lot for Haiti and no one should feel obligated to participate in a singalong that will immortalize their bad haircuts for centuries like what happened the first time. (@jezebel)

ANITA BRYANT: US television network HBO is developing a biopic of Anita Bryant, the campaigner who warned gays were recruiting children. (@pinknewsuk)

OSCARS: The Oscar nominations were announced. I imagine if you’re interested in this sort of thing, it’s likely you’ve already looked it up by now, and have some feelings about it, which you’re welcome to share here. My only question, based on not seeing any movies this year but reading about a lot of movies, is why was Avatar nominated for Best Picture? That’s all. We all know Taylor Swift is probs gonna win anyhow.

VOGUE: Have you seen Paris is Burning? Why the fuck not? In any event, Willi Ninja (the name might sound familiar — Benny Ninja often guests on America’s Next Top Model) is featured for Black History month. (@blackgaygossip)

Good news! You can watch it right now! Let’s begin:

COMEDY?: John Stewart will appear on The O’Reilly Factor in a two-part interview to air Wednesday and Thursday nights on Fox. I am so conflicted! (@ew)