Is Imagine Me & You a good movie? I’ve seen it no less than twenty times, and I still don’t know. It’s funny. The performances are charming. It’s a fun — if somewhat poorly paced — queer romcom. And the kissing! The kissing is very good. I like the movie very much, but I don’t think it’s necessarily Good, and I don’t even think it’s a movie that’s So Bad It’s Good. It’s just sort of a fine movie but one I watch over and over again, because it was one of the first lesbian romcoms I ever saw, and you never forget your first.

In case you haven’t seen the movie: Piper Perabo plays a woman named Rachel who marries her boyfriend Heck (Matthew Goode) but spends much of the wedding making eyes at the florist Luce, played by Lena Headey. A while after the wedding, Rachel invites Luce to dinner with the intention of setting her up with Heck’s dickish friend Coop. At dinner, Luce reveals that she is a lesbian and also that she believes in love at first sight. Rachel doesn’t. She thinks it takes time and care to find your true love. And I’m sure you can see where this one is going!

If you’ve ever heard a dyke randomly shout “you’re a wanker, number nine!” while drunk at a bar, well, they were referencing this film. But my personal favorite line will forever be: “Am I gay? I’m ecstatic!”

I have several questions about Imagine Me & You: Is it normal for a florist to attend the wedding when they’re just a vendor and don’t actually know anyone in the wedding party? How does Lena Headey make low-rise jeans and a pink tie-dye scoopneck look sexy? Why does the character Coop exist at all? Are all florists lesbians (more on that later)? Luce’s lower back tattoo????????????

Rachel spends much of the movie longing for Luce but unable to bring herself to leave Heck. Some classic cinematic Sapphic yearning. The desire is palpably felt. The first time Rachel goes to kiss Luce, she stops herself. The second time, she leaves. But then she comes back. Imagine Me & You knows how to tease, how to dangle exactly what we want, exactly what Rachel wants, right there in front of us.

And thankfully, it isn’t all a tease. Even though there are plenty of obstacles along the way, once Rachel decides to take the plunge with Luce, Imagine Me & You lets these characters have what they want. The emotional climax is equal parts funny, sentimental, and specific to them. It’s honestly one of the best and most memorable romcom endings ever, and you should absolutely TURN IT OFF AFTER THIS MOMENT. Because the movie’s epilogue is its worst part, rooted in the assumption that anyone cares about Heck in all of this.

That said, I do think the movie does a compelling job of examining the emotional complications of Rachel falling in love while she’s married. Much of her internal struggle doesn’t stem from internalized homophobia or a fear of being a woman but rather of hurting someone she really cares about and has known for a very long time. Heck feels betrayed, and that’s valid. But I still prefer to pretend the credits montage doesn’t exist.

I still have a hard time figuring out exactly where Imagine Me & You fits in lesbian film canon. I think Drew hit the nail on the head when she wrote: “Out of all the lesbian romcoms, this might be the one that most successfully takes your standard hetero romcom and queers it.” Imagine Me & You has dimensional side characters, genuinely good laughs, and some lovely sequences. But it’s by-the-numbers in its plotting and bare-bones in its depiction of love. This movie is obsessed with the idea of love at first sight, but I’m not sure it makes me actually believe in it.

But I do also love the satisfying feeling of watching a predictable and charming romcom, and this hits all those right notes while also being VERY GAY. It’s the kind of movie you can pop on during a rainy day with some scented candles and just sort of sink into.

There’s one thing I do know for certain about Imagine Me & You’s legacy: Arranging flowers is gay. Clarissa Dalloway in The Hours buys the flowers herself. The Haunting Of Bly Manor ends with its two queer characters buying and running a flower shop together. And Imagine Me & You is peak Dyke Floral Arrangement — a subculture I just made up right now but one I absolutely subscribe to. Rachel and Luce’s kiss in the floral shop, the one that almost doesn’t happen, is fantastically blocked, acted, shot. And the fact that they’re surrounded by flowers as it’s happening makes it all the more lovely. It did, however, give me unrealistic expectations of being seduced by a florist as a baby gay.

Did I write this whole review just an excuse to post the autumnal floral arrangements I spent over an hour putting together last week? MAYBE SO. 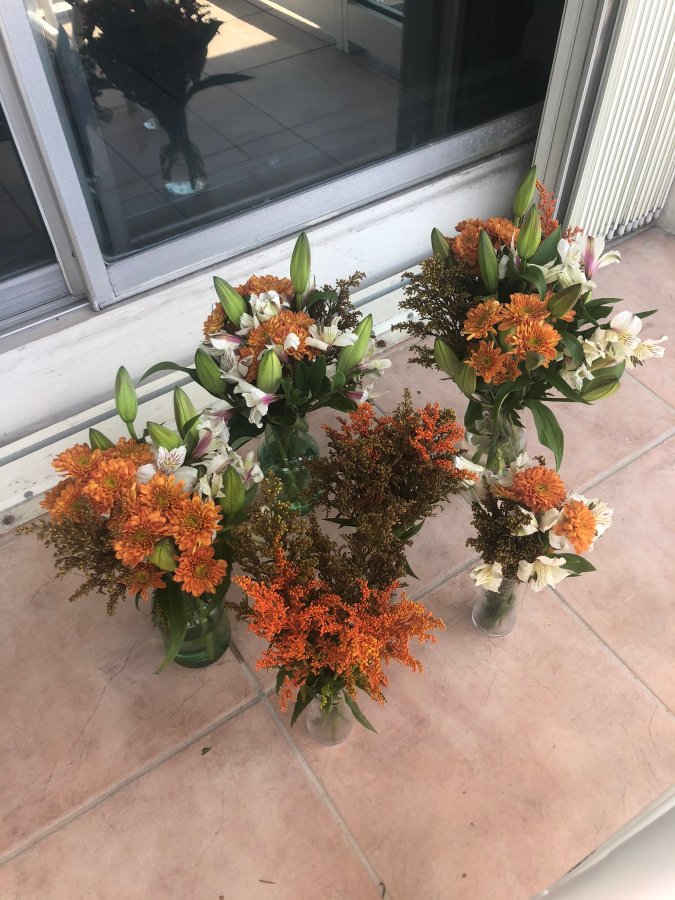 Join A+
Related:lost movie reviews from the Autostraddle archives