Odds are good you remember exactly where you were in December 2013, the moment when you realized that Beyoncé had just released an entire album and comprehensive music video collection, completely by surprise.

This time around, maybe Bey’s not quite so sneaky. I see you, Beyoncé. You’re not nearly as clever as you think you are. You think you can just keep releasing entire albums out of nowhere and nobody’s going to get wise to your games? Try again. A mysterious image has been making the rounds on social media, featuring the tracklisting and release date of an alleged Volume 2. If this image is legit, Volume 2 would feature 11 brand new songs and cameos from an assortment of  the usual suspects (Nicki Minaj, Justin Timberlake, Rihanna – and let’s take a minute to admire the conspicuously top-billed Blue Ivy). The record should be released on iTunes on Friday, November 14, with the physical 4-disc CD/DVD set available Tuesday, November 25. Beyoncé, records don’t come out on Fridays! What are you even doing?!

Again, we have zero confirmation that this album is for sure a real thing that is happening, but it does seem like something Bey could plausibly do. Mysterious sources have had gossip columnists buzzing about top-secret studio sessions for the past couple of months, and we all know how Beyoncé loves the element of surprise. Still, as Complex pointed out, there are a few possibly telling errors in the document below –  for example, it incorrectly lists November 25 as a Monday, and “Good in Good Bye” is actually a lyric from “Best Thing I Never Had.”

What kind of an evil genius would deign to get our hopes up like this? A new Beyoncé album could drop any second. You could be strolling along, minding your own business, and suddenly BAM, 30 new music videos. None of us will ever be able to sleep through the night ever again. 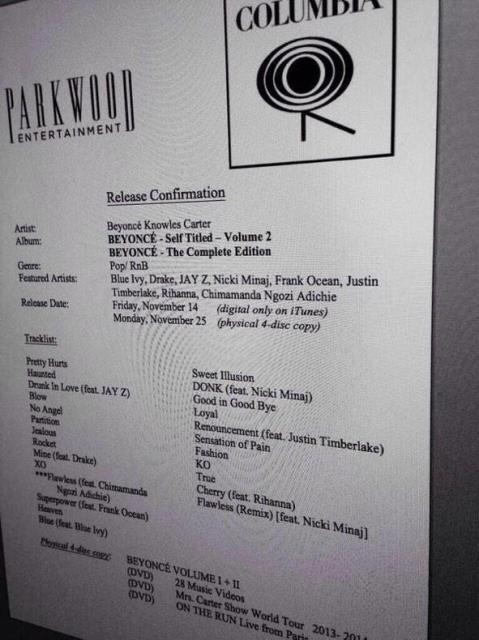 Hi Beyoncé. I see you. You don’t fool me.

Basically, what I’m saying is, if this is real, your Thanksgiving is going to be amazing… but let’s not get our hopes up just yet.