Far too often our queerness is only discussed in three contexts: relationships, family and politics. But our queerness plays a role in our friendships with other queers, too, and that’s what this series is all about. In honor of Gal Pal Week, welcome to “Interview With My Queer BFF,” in which gals interview their best queer pals about their exciting queer paldom. And by “gal pals” we don’t mean “girlfriends” or “wives” … we mean GAL PALS. 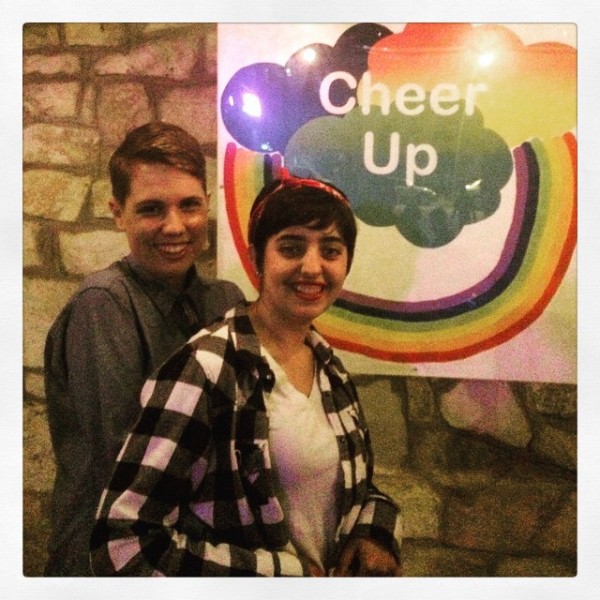 Audrey: Hey, are you ready?

Dana: I’m eating pie while we do this interview.

A: That seems appropriate.

D: Do you want to know what kind of pie? [no pause for response] Coconut cream!!

D: Well, we met at freshman orientation at [the University of Texas]. We had been in the Plan II Facebook group, but I remember that when we actually met, we were in a stairwell and you stuck out your hand and said “Hi, I’m Audrey White, we’re friends on Facebook.”

A: I don’t have a specific memory of that because I probably blacked it out with my shame, but I believe that it happened.

D: It’s something you would do. And you did.

A: So we met in a stairwell, and then we Got Oriented. How did we become… us?

A: I remember knowing that you were not straight and being fascinated by that, you were the first bisexual person I had ever met. I was not really fully aware that was a thing that existed among my peers. I was like “That’s a cool thing! For other people!”

D: “But definitely not for me, I’m going to be straight for at least three more years!”

A: “Two months from now I will kiss you for the first time!”

A: We drank coconut rum warm with no mixer, it was the first time I ever drank. Y’all guided me very poorly.

A: And then we all made out to Belle and Sebastian. It is the most freshman-year-of-college thing that has ever happened. 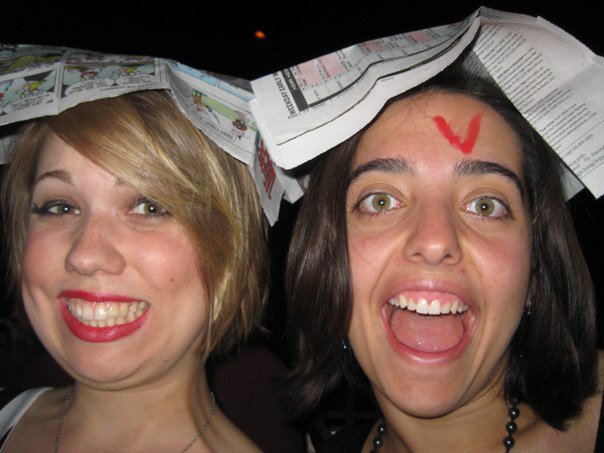 D: Basically, almost since we met.

A: We were friends right away, and then over time everyone else sort of filtered out and we were standing next to each other triumphantly in the quad.

D: And Josh was just lurking somewhere nearby.

A: Next, why are we friends and not girlfriends?

D: I want you to answer this first.

A: I lot of it is because I was straight, and so our relationship did not develop in a romantic way. Even when we would get really drunk and make out to Ke$ha in front of hundreds of people in our own house, it was never a romantic thing. The kind of support and friendship we provide wouldn’t translate into a romantic context. Although I do think it’s noteworthy that we have never kissed since I came out.

D: For me it’s like, a thing I’ve never really considered. That was just not… also we would not be good girlfriends.

A: We would be a horrible couple.

D: We are too similar in certain ways.

A: We would literally never leave the house because we would be too busy processing our feelings.

D: Our relationship is already the most intense relationship that I’ve had in my life. Adding more to that…. maybe nah.

A: Would our friendship be different if we were straight?

D: I dunno, I’ve never been straight in our friendship, but you have, and I feel like it’s basically the same, we’ve just grown into it together.

A: And like, we’ve been best friends when we were both dating men.

D: I like that you’ve surpassed me as the queer one. Sometimes I have complicated feelings about that but mostly I just think it’s funny. I’ve always been a laid back part-time queer.

A: Whereas I came out and was like “Alright motherfuckers, let’s do it!”

D: I came out when I was like 13. It was not as big of a revelation because everything that happens when you’re 13 is a revelation. At that age you’re just having so many feelings, and it was just another feeling. I think it’s cool that we’re both queer, I like it. It’s better than when you were straight.

A: Man, being straight, what a thing that I did. I also think you not being straight was very formative for me in the sense that I do think that having a best friend who was openly bi and just doin’ it was subconsciously a huge factor in me coming out, or even in me starting to act on my desires before I could call it anything. I knew that for you, the most important person in my life, it wouldn’t matter.

A: You’ve been eating that piece of pie for like 25 minutes! 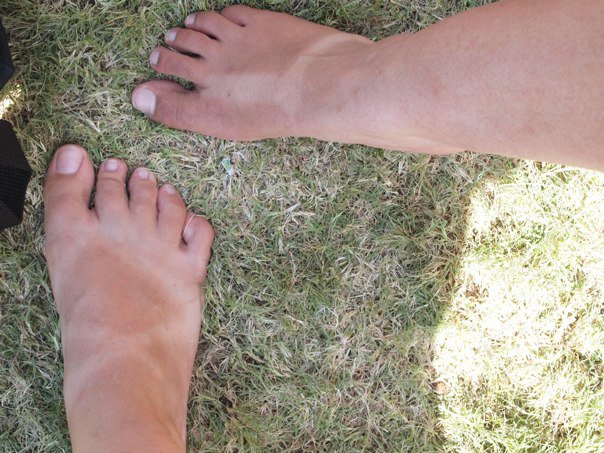 Very proud of our sandal tans at Austin City Limits 2010.

D: Let’s talk about our biggest fight. It was like a months’ long simmering horrible time.

A: It was compounded by so many other things. Really our biggest fight was about the fact that we couldn’t be there for each other in the way that we had always been because we were the source of the tension. The much harder thing was not the thing that was upsetting us or me but that suddenly I couldn’t count on you for literally anything like I had always been able to, which was a good thing to go through but at the time it felt like my world was literally ending.

D: It was a fight that built up. And we weren’t actively fighting, we kept trying to pretend like it was fine. It really started that spring when we were still sharing a room at the co-op. That was when your depression started to get bad and you were on that terrible birth control and when you and Eddie probably should have broken up. I remember during that time I just wanted to be there for you however I could, but I hadn’t really learned about boundaries at that time. Eventually that ended up being really bad, because when I finally was like “wait I need to put up some boundaries” then it was way too late.

A: And it felt like you had pulled the rug out from under me, and it made me feel really guilty, like I had been a shitty friend and then you couldn’t handle me. I took it very personally because that’s the headspace I was in. And then it was like an eight-month saga of me not being ok and our friendship not being ok. And it wasn’t always not ok, we were still roommates and we still did cool shit and loved each other. When did it go from lowkey hard to something that we actually had to deal with?

D: You moved out of the co-op for the summer, and I was really lonely and you were spending most of your free time with Eddie.

A: And you were studying Arabic for 11 hours a day.

D: And then I hooked up with [Eddie’s best friend] and you freaked out and I was very confused by that.

A: I was very confused by that too! I understand why that situation affected me the way that it did, but I would never ever react to any of it in the same way now so I look and am like “What kind of freaky alien person was I?” And I felt like a horrible person and would try to compensate for it, like that time his car broke down and I drove to get him from Salado even though I didn’t actually want him there.

D: And I was just like, “I’m sorry you’re upset but I don’t think you have a good reason, so it’s not going to stop me from doing what I want to do.”

A: Which was the correct thing to do! There was no way to fix me via not doing it.

D: But I was also resentful of you being upset.

A: I felt like my whole brain was literally falling apart, and like, I was really depressed, I was thinking about suicide every day. My relationship with Eddie was falling apart but we were keeping it together which was bad for both of us. I wanted to feel like something was the same, like our friendship was the same, and then it wasn’t, and we got really alienated from each other.

D: And you kept lashing out at me. And I was definitely an asshole some of the time. And none of us knew how to deal with that shit. None of us had been to therapy as adults.

A: Also we were taking Plan II Physics that semester. Ugh. 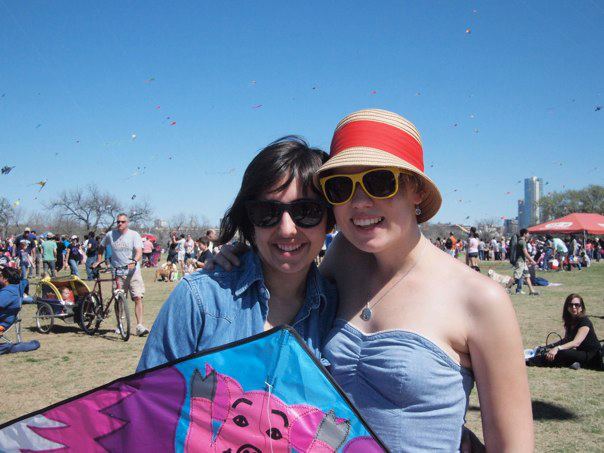 We had the cutest kite at the kite festival in 2013.

D: What have you learned from our friendship?

A: That’s a huge question to answer, because I have become myself via our friendship. I don’t know how to parse out a specific thing. I can say like, I learned how to deal with my emotional life in ways that are not toxic to the people I care about most. I could list a million things. 18-24 is young adulthood, and we did it all together.

D: You’re the reason I lost my virginity when I did. Do you remember when we watched Spice World, we made Josh be Ginger, and we  got drunk and then went to Ken’s Donuts and then we were sitting in the courtyard, and I was talking to you about [my ex], and he was about to move away and I felt like it would be too intense if I lost my virginity. And you were like, “What are you going to regret more, doing it or not doing it?” That was an amazing thing to say. And then, the very next night, I told him “Let’s have sex.”

A: I remember this!

D: And then I called you, you were at camp.

A: I was at church camp!

D: I feel like I learned everything from you.

D: I was serious when I said our relationship was the most emotionally complex and fulfilling I’ve ever had.

A: Word. Yeah. Even when we were horrible to each other, we never didn’t love each other. We never stopped being friends. No one else has ever put in that much effort to keep loving me, and I see that and appreciate that. And look at us now! Two hot dykes, running the world. 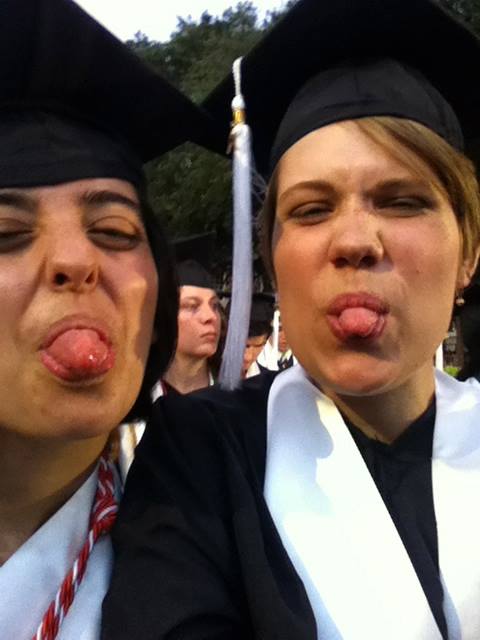 Growing up can mean a lot of different things. UT graduation, May 2013

D: I finally finished my pie!

A: Does that mean the interview is over?