I say this with as much self-awareness as I can as a 40-year-old person who often writes about how things were in the 1990s (have you heard of them?), but it’s true that nostalgia can be a toxic impulse. It’s easy to succumb to its siren’s call, driving us to spend our precious time mired in the memory of what was instead of what is and what might be. But I also think it’s important to take a look at our past and put it in context, use the knowledge of the present to sift through ashes of the past and find what was really there. Nostalgia with purpose can move mountains in our collective understanding of the present.

Curses, a new indie video game from Toronto-based studio Killjoy Games, is an exercise in storytelling through a nostalgic lens, putting you in the driver’s seat of a teenager named Girl who exists only within the confines of her bedroom, perfectly squared against the backdrop of the 1990s.

Girl, you come to learn, is reeling from abuse suffered at the hands of her father and processing the trauma of the death of her mother. To get herself through the immediacy of her emotional fury, she turns to the most trustworthy of support pillars: pop culture, magic, tarot, and her familiar, a white cat (who may or may not be real). Girl’s familiar is the only other character we meet in the brief but memorable game and is the prism through which Girl’s emotional state filters into the light.

Curses is nostalgic by design, modeled after the point-and-click adventure games of the 90s once made popular by studios like Sierra Online (King’s Quest, Leisure Suit Larry) and Lucasarts (Day Of The Tentacle, Monkey Island). Leaning into the form of the era to embrace storytelling within a long-lost time period is an effective framing, using the form and function of the past to tell a more immersive story within it, all while speaking from the wisdom of time passed.

It is easy to lose ourselves in the thrill of nostalgic beats when we talk about the past. In the 90s, we can talk forever about our love of The X-Files or Nirvana, Doc Martens on our feet and flannel shirts tied around our waists. But what’s harder to reach is the core of what all these pieces of ephemera meant, how they touched us, and the ways in which they formed us. 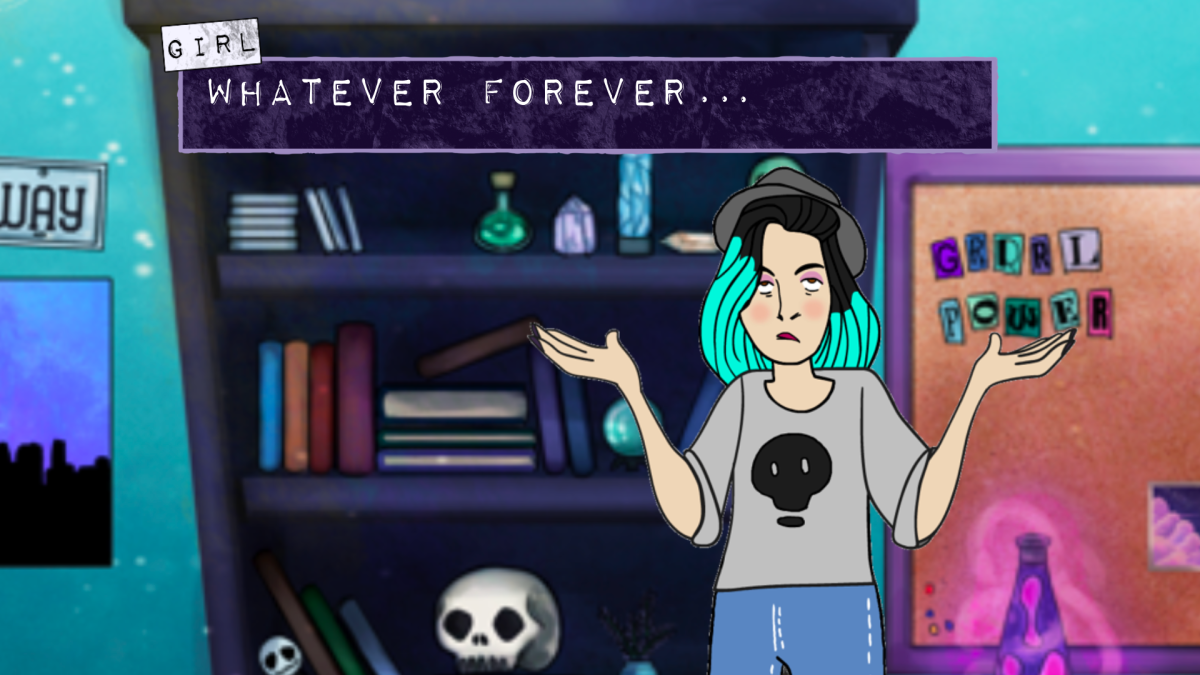 Curses tries valiantly to move deeper than nostalgia to varying degrees of success. While most of the pop culture references are sly winks and nods — posters litter Girl’s wall with pop culture touchstones like Baz Luhrman’s Romeo+Juliet gently renamed Boy+Girl — but the conversation drawn out of them is mostly surface-level. While interacting with the X Files analogue, you can choose for Girl to talk of her crush on either or both of the stars. You are freely able to choose queer options when swooning over 90s hearthrobs. But the references feel more wink and nod that deep exploration. Too often, the references felt like something in the back of my mind was saying get it? with a wink and a nudge.

It’s an easy trap to fall into. These references are fun after all, and isn’t it a nice trap to be in anyway? There is a pleasant thrill to clicking around Girl’s room and engaging with the subtle nods here and there, and it’s in this part of the narrative I worried we had slipped too far into nostalgia without purpose. When Girl, nudged by the player, speaks of her crush on the Dana Scully stand-in, she references being a modern girl, her queerness an unspoken extension of that. This fact is remarked upon and moved past too quickly, and I wished we had spent more time unpacking and living in what the queer politics of the 90s were and the often rampant homophobia pervasive in media.

It’s a triumph that Girl is able to vocalize her queerness. I only wished more was spent dissecting what that might have meant and how hard it would have been to be so open, even with herself, in the 90s — let alone in the context of living at home with an abusive father and a distant step-mother.

This is a delicate line to walk, a danger to lean too hard into nostalgia but equally so to fall into rose-tinted glasses. It’s easy to look back at the 90s and our understandings of our own youthful queerness from a distance, but where I had hoped to feel connected to how difficult it was for a lot of people to grasp at queerness in the 90s, I felt the acceptance came too easily.

This is not to say the queerness feels forced or flawed. Girl is very assured in her queerness, going so far as making a crack about not wanting to go back into the closet if you try and click on the one in her room.

Girl feels trapped, insofar that so many young people are stuck at home with bad situations sliding ever deeper into worse territory. Magic is a tool, one that provides her with the language she needs to process the place she finds herself in and work through her feelings of depression, anxiety, and isolation. Words we didn’t always have the best terms for in the 90s, but neither does Girl. She is just angry in that implacable way teens are when they lack the language to describe themselves. At one point in my playthrough, she put a mixtape into her stereo and let loose in a loud cacophony of grunge-era aesthetics. Girl is angry and frustrated at that moment and lacks the ability to do anything but thrash.

There are, according to the press kit, ten endings to the game, which can be played relatively quickly, albeit with a myriad of tangents for Girl to lose herself on. I played through to the end and chose self-care as my finale. I wanted Girl to be okay, because anyone that has been her in one way or another can look back and tell her she is in fact going to be okay. That choosing to care for herself is the best way for her to look back on her youth with the same understanding and empathy I find myself playing the game with.

What Curses sets out to do is tell a story of the 90s in an authentic way, taking trappings of the era and creating an elaborate diorama that provides space for storytelling and healing through magic. Curses works wonders as a means of processing difficult and long-scarring trauma. A difficult task that Curses handles masterfully, perhaps stemming from the strength in the diversity of the team behind its creation. Curses never minimizes the trauma, never writes it off or discounts the feelings of Girl, and by extension the player. With a familiar, a pentagram, and other focal points of magical power, Girl is able to freely express her every emotion, using the strengths and drawbacks of each state to let the weight on her shoulders unfurl into the ether.

Curses’ strength rests in using our own knowledge and understanding of our emotionally charged youth to make going back to when we needed kindness the most all the more effective. In the confines of the same style of video games many of us played in the 90s, we can find a new way to tell ourselves it will be okay, that it’s important to choose to listen to our emotions, that we can get through this, and that what we’re feeling is worth vocalizing. This isn’t nostalgia but rather an intriguing premise of a purposeful catharsis.

Niko has written 22 articles for us.