This week in Illinois, the Catholic Charities of the Diocese of Joliet and Springfield as well as Catholic Social Services of Southern Illinois in the Diocese of Belleville called off their legal fight with the state regarding continuing to provide foster care and adoption services. Illinois declined to renew adoption/foster care contracts with Catholic Charities after officials determined it was violating anti-discrimination laws by refusing to license same-sex partners in civil unions.

Catholic Charities claims it is protected by the provision in the Illinois Religious Freedom Protection and Civil Union Act that states the law (which legalized same-sex civil unions) will not “interfere with or regulate the religious practice of any religious body.” Lawyers for the Illinois attorney general point out that this section of the law exclusively applies to clergy who do not wish to officiate same-sex civil unions.

The Diocese of Joliet released a statement Monday on their website regarding the end of the appeals:

It is with deep regret that we have decided to relinquish our appeals in the litigation concerning the provision of foster care and adoption services by Catholic Charities of the Dioceses of Joliet and Springfield in Illinois and by Catholic Social Services of Southern Illinois in the Diocese of Belleville. This lawsuit had sought clarification as to whether the “Religious Freedom Protection and Civil Unions Act” passed at the end of last year protected the freedom of faith-based agencies to provide foster care and adoption services in accord with their religious beliefs.

The Diocese claimed that “the State of Illinois has made it financially impossible for our agencies to continue to provide these services and the courts have refused to grant a stay for these operations,” but didn’t mention that they weren’t winning their court case in the meantime. Sangamon County Circuit Court Judge John Schmidt ruled in August that “No citizen has a recognized legal right to a contract with the government.” That is, regardless of whether or not Catholic Charities is religiously protected under the Illinois civil union law, the state of Illinois isn’t required to renew it’s $30 million dollar annual contract. Catholic Charities’s previous contracts expired June 30th, and without renewal or stay of operations, they have been transferring 2000 children out of their service (and to agencies which are ready to work with same-sex couples) for a November 30th deadline. 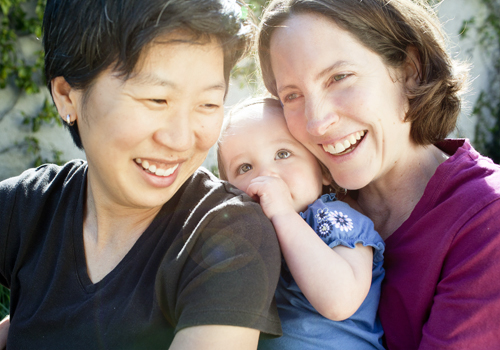 Unfortunately, neither the legalization of civil unions nor the end of Catholic Charities legal battle will mean the end of the Catholic Church’s fight against gay and lesbian families in Illinois. Back in September, the Catholic Conference of Illinois (CCI) formed an entire Defense of Marriage department. The head of the department, Zach Wichmann, released this statement upon the department’s formation:

But our message will be proclaimed for the sake of stronger families, secure children and an enriched spiritual life. The effects (of same-sex marriage) are evident in the performance of children in school, in truancy and crime rates, and in an ailing culture that too often values feeling good over self-giving, and individuality over the common good.

Setting aside the fact that, for the hundredth time, same-sex parents raise children just as well as their straight counterparts, this is the same sort of nonsense that claimed that LGBT parents wanting to adopt is somehow related to Jerry Sandusky’s child abuse. This is the same as Jennifer Roback Morse, head of the Ruth Institute (NOM), claiming that African-American children are being “taken from their parents” to be used as “human guinea pigs” for gay men to “celebrate diversity.” All of these claims are founded on a baseless assumption that queer Americans don’t want to get married and have children for the sake of love and family, but rather to further some imagined sociopolitical agenda.

How is it that stable same-sex couples who want to adopt children are seen as putting themselves before children, while a Catholic adoption agency endangers the cases of 2000 children by refusing to compromise their own actual, tangible sociopolitical agenda and can still act self-righteous about it? Maybe by the time the children that they’re refusing to help are old enough to understand what just happened, the Diocese will be able to explain themselves.