The O.C. premiered in August 2003, one month before I entered my sophomore year of high school, and featured a world that could not have been more different than my own. I did not live in California, I was not skinny and popular, I was also not dorky and into video games, and my inner world resembled, you know, teen girl reality, instead of the soapy unbelievable glittering trainwreck Josh Schwartz created for his main characters Seth Cohen, Ryan Atwood, Marissa Cooper, and Summer Roberts.

Despite that, or perhaps because of it, I loved The O.C. with my whole entire heart.

My heart thought it was a heterosexual heart at this point, goddess bless baby Vanessa, and my ultimate crush was Seth Cohen (who I also think of as one of my Gay Roots, though that’s a different essay for a different day). So imagine my surprise when Alex Kelly showed up in season two and after a brief romance with Seth started exchanging meaningful looks with Marissa and it… meant something to me. 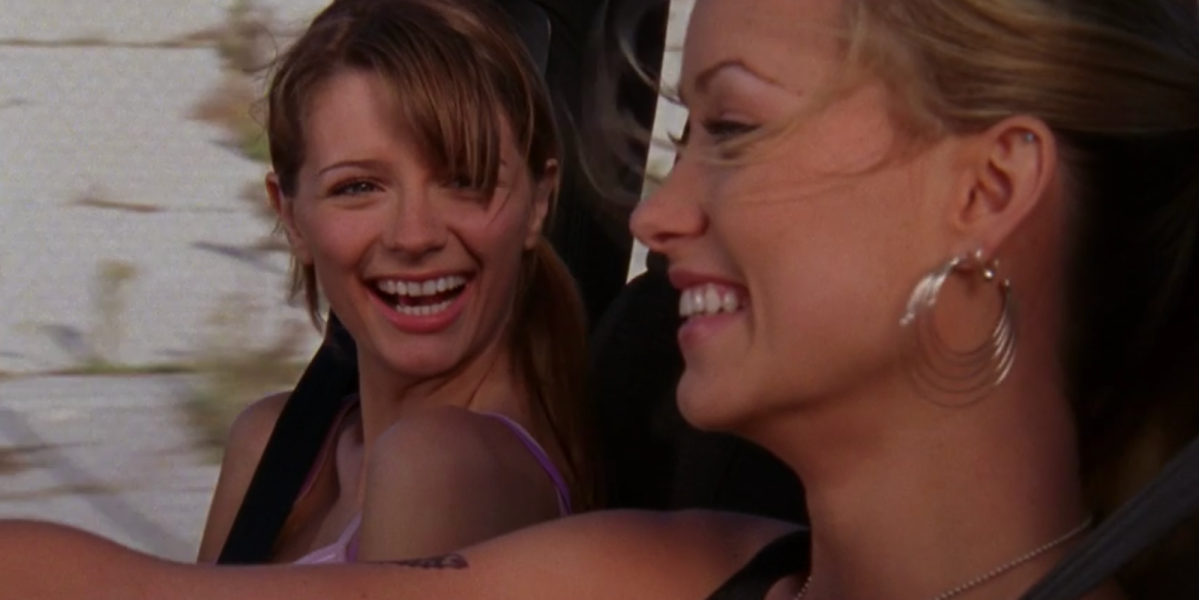 It makes sense, looking back at the scene and close-reading it (thank you grad school, I imagine this is what my instructors all meant when they taught me how to refer to the text to make an argument). Alex shows up in Orange County for season two as the “bad girl” with a “troubled past.” She’s bisexual, she’s emancipated from her parents, and she runs The Bait Shop, a new club where all these high schoolers are inexplicably able to hang out and listen to indie bands that my high school crushes (pretentious boys who based most of their personalities around the obscure bands they liked to listen to) would then accuse of selling out by performing on a mainstream television show.

Alex, played by Olivia Wilde, is so hot. She’s gorgeous, objectively, but her energy is also extremely sexy. In a town filled with rich troubled kids who are all at least somewhat preoccupied with how they are perceived, Alex is different. She does whatever she wants. She’s strong. She takes care of herself. Is it any wonder that Marissa, a character forced to shrink herself into everyone else’s expectations, is drawn to this badass queer woman? Is it any wonder I was?

This particular scene is very short. If you went to pee in the middle of the episode, or your mom came into the room to ask if you’d finished your homework, you might miss it. Alex and Marissa decide to go to Los Angeles so Alex can rescue some of her belongings from her ex-girlfriend’s apartment. We enter the scene from the vantage point of someone in the vehicle, staring at the California freeway as Alex drives and Marissa sits in the passenger seat asking questions. We’re supposed to feel like we could be one of the characters in the car, and I did. Marissa wants to know what Alex’s butterfly tattoo means, how Alex was able to become emancipated from her parents, if Alex ever misses them. They’re giggling and having a good time but they’re going deep quickly, too. Rilo Kiley’s “Portions for Foxes” plays over their dialogue, starting with the intro and then cutting to the end:

When Marissa asks Alex if she ever misses her parents, Alex’s answer comes quickly: “Sometimes. But my friends are my family you know?”

Marissa smiles and nods, clearly pleased to be included in Alex’s chosen family. “I do,” she says.

I don’t mean to be dramatic, but that is absolutely the moment I realized I could be a dyke.

I’m not going to write a revisionist history about what happened to me when I witnessed Alex and Marissa in that car two episodes before they ever kissed. I did not immediately come out, and I’m not even sure I let myself acknowledge how interested I was in that particular soapy storyline.

And I’m not going to write a revisionist history about what The O.C. intended when it comes to Alex and Marissa’s brief relationship (they literally only get five episodes as an actual “couple” before the relationship implodes and Alex is written off the show), though several other writers on the internet have argued that it was either a grab for ratings like every other sensational plot point in the show or a genuine bid for LGBTQ inclusion that should have gone farther and deeper. I can see how a less generous reading would say that Marissa is calculating how to further piss her parents off in this scene, taking advantage of Alex’s interest in her to pull off yet another stunt to add to her collection. Maybe! But that’s not what this scene means to me, regardless of intent.

The truth is I have no idea what was going on in that writers’ room in 2005, but I can tell you that it would take four more years before I ever asked a girl too many personal questions too quickly and then let her kiss me and when I did, Rilo Kiley played quietly in my head. It would take a few more years after that before I started investing in queer community and queer friendships that would allow me to understand Alex’s commitment to her friends as family. And did so many other things play a role in me eventually realizing I’m really fucking gay? Yeah, of course.

But this scene with Marissa and Alex and the California freeway and Rilo Kiley played a major role. This scene gave me a glance at something I didn’t yet know I would one day look directly in the eye.

And when you’re a straight girl in high school who has never considered that you might be a dyke and you see that magic happening between two girls on your favorite TV show? That moment can eventually explode everything.