Feature image is a cropped “Wheelchair Sex Positions” poster via streetsie.com via sexualityanddisability.org.

“I’ve had people think weird things about my sexuality that are absolutely connected to my disability, but the experience was not that I had no sexuality — it was that I had a fucked up sexuality,” says Lyric Seal aka Neve Be, a queercrip writer, performance artist and adult film star, in an interview for Autostraddle. “Many people who work in disability and sexuality media want to make the goal: let’s sexualize disabled people; let’s make sure they know that they have bodies. I’m like, no, it’s more complicated than that.”

Why is it that when navigating experiences of sexual marginalization, we are so often pressured into traps of disavowal? To disclaim, dismiss and deny the messy, fleshy trails our bodies followed before and may seek to travel again? When encountering questions of sex and disability, the overemphasis on whether or not crips have been either desexualized or hypersexualized is a necessary and important social critique, and yet it also enforces the notion that the experience of crip sex only offers insight into the experience of discrimination. Put simply: even within the most sexually progressive circles, people with disabilities are rarely considered experts on anything other than ableism — let alone how to fuck and get fucked.

What follows, then, is a conversation meant to move beyond the erosive architecture of “do they/don’t they”; a conversation bigger than the over-rehearsed scripts about disability and sexuality that lead to predictable, shallow conclusions about oppression and embodiment. Conclusions that measure the worth of disabled people by their capacity to reinstate norms from the periphery rather than provide alternative knowledge from the center. 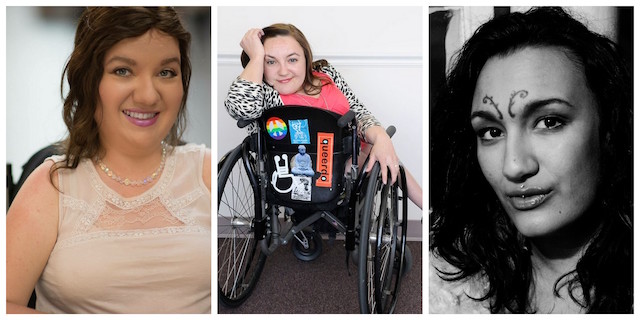 Autostraddle: How does romance or sex factor into your relationship with your wheelchair?

Bethany Stevens: My wheelchair is a sexually assistive aid, which sounds like a clinical way to say I try to fuck it and fuck in it. Despite my efforts to figure out how to penetrate myself with bits of it, it never works with the angles of my vagina and the parts of my chair. It works wonderfully to assist in sexual activities with others, people can lean their legs on my chair while I penetrate various body parts. My large wheels are taller than my seat, so people can lean on them as they straddle me so they are not bearing weight on my body.

Lyric Seal: I have two chairs. The power chair is named Gianna and she is metallic Barbie pink. She’s a high crip femme. She is hot and fast and yet a subtle performer. My other chair is Michelangelo. He is more of a lost boy and we’ve adventured for nine years together, so I treat him with a lot of respect. And while I do involve him in the sexual things I do, he’s not a sex toy to me. And someone else cannot use him in the same way that I use him. We can use him as an assistive device in our moment, and we can also use him as a sexy device, but he’s my partner, not someone else’s partner. My relationship to him has been really romantic.

Stella Palikarova: I always refer to my wheelchair as female because she’s fast and efficient. I try to think about ways to make her sexy or ways to make being in the chair sexy. Lap dances are great.

Seal: I have choreographed duets and dance pieces with my chair that are primarily about some kind of eternal service relationship. What does it mean to always have an imbalanced relationship or always have a function for someone? People who identify as service bottoms or service tops love that. And I think that being able to anthropomorphize my chair in that way has been really helpful to me in imagining that it doesn’t have to be a burden for someone to be eternally in service to someone else.

Palikarova: You can also incorporate the wheelchair into part of your foreplay. Not everyone transfers out of their wheelchairs for sexual activity based on their disability. For many people the wheelchair is the site of their sexual pleasure. Personally, I like to incorporate the chair into role-play. Like if my chair is my throne or my chariot and my partner is worshiping me in it. I remember playing a sexy game once where my partner’s head was not allowed to be higher than mine. That was fun!

Seal: With my primary partner, we do tons of role-playing. I am a pet alligator, we’re both tigers, I’m also a young teenage boy…

Autostraddle: Does your chair play a role in any of those scenes?

Seal: Do you remember the ’90s TV show Wishbone?

Autostraddle: That overly-educated dog on PBS?

Stevens: I have a fantasy of having sex with my wheelchair. She is an extension of my body and thus exists in the bounds of masturbatory fantasy. Her lines are sexy, I sit on her face all day, it only makes sense that when I am exploring how to use my wheelchair in sex play I would turn to the chair itself to give me pleasure. My wheelchair is with me on these journeys but is not a top or bottom, if anything she is a switch!

Palikarova: I also really enjoy bondage. People have told me that that’s strange because in some ways I’m already “bound” to my wheelchair unless someone physically takes me out of it. So what does it mean for me to be interested in that kind of play?

Autostraddle: When it comes to power play, is there an assumption that you’re a bottom or a sub because you’re a wheelchair user?

Seal: As a femme and as a person of color and as a black person and as a visibly disabled person, especially as a chair user, it’s more than being read as a bottom. It’s something like being read as a doll. I identify as multi-gender and while I don’t feel that I have been desexualized, I have felt the sting of being infantilized. I’ve had toppy people of multiple genders and masculine people decide, without my consent, to interact with me in ways that were very protective of me or stepping in for me or very chivalrous. […] Like don’t get me wrong, I mean, if you have your game on lock, like you have the side grin and smoke a cigarette against a wall and have a leather jacket… and I get to be the 1950s prom queen… then OK.

Palikarova: I usually enjoy being more on the submissive side with my partner, but that surprisingly can make people uncomfortable because apparently my physical disability already puts me in a vulnerable position. A lot of the physicality of sex comes from what my partner can do. So if you enjoy being submissive and you have a disability then people think they are taking advantage of you.

Autostraddle: How has your thinking about disability, sex and sexuality developed over time?

Seal: My disability is more and more becoming a seamless part of how I can interact on a gender level and on a sexual level. The way that I’ve romanticized physicality has had to be tempered based on the reality of my body and that’s a role that my chair has played in an incredible way — helping me say, OK, this is the romantic way you move through the world, this is the sexy way you move through the world, etc. I feel like my longest relationship with this chair, Michelangelo, has been one of romance and partnership.

Stevens: Sexualizing one’s assistive devices seems to be a part of the journey of sexual actualization as a disabled person, for some anyhow. For way too many moons, I wanted to separate from my wheelchair and my disability because I had to break down a ton of internalized ableism. My process of divesting from that shit is not done, but at least I can see the value of the sleek lines of my wheelchair and how it moves with my body. I recently got a new wheelchair, after waiting a full year for insurance approval, and found myself feeling like I was learning a new lover’s body.

Tovah has written 5 articles for us.