My girlfriend leans over to look at me play. “Do you want me to call you Nico?” she asks.

“Mmm not right now,” I say, playing the way it sounds in my head over and over.

My dad grumped while reading through a magazine he’s brought with him because he is ready for a break from direct socializing and the rest of the family is fine with this. The vaccine had just come out and so he, his wife, and my sister rushed up for a visit to Pittsburgh almost as soon as the last two weeks had elapsed after our respective jabs. It was June, and we were able to spend most of our time out on the back patio. As “parallel play” time began, my sister pulled out her tablet and zoned into her game. My dad’s wife contentedly read a different magazine. I pulled out my computer to write the Saturday A+ member newsletter, and my girlfriend Sadie got herself a book. Our dog, Mya, snoozed in the spring warmth. As I wrote the newsletter, I spied the game on my sister’s screen.

I wrapped up my work and went to sit beside her.

And I had. I work with an all queer team, after all, with folks who gravitate toward cozy games. We’re queer, okay? We have anxiety! We need to be soothed.

I hemmed and hawed at first, but just a few days after they returned home I downloaded the game. Now, I don’t have a huge history with games. I played some Minecraft, but got bored because, well, there’s not a lot of story there. I needed more. I also managed to play through about half of Silent Hill 2, which is all about the story and the scenery and looking at monsters, which I find fun and enriching. I did have to have a walkthrough guide open the entire time because I, um, would not have been able to successfully get even halfway without it. I just don’t have, like, gamer instincts because I didn’t play enough games in my life to develop them, so I play video games like someone who has no real sense of typical gaming conventions; like my answers to every puzzle before I referenced the walk through were completely screwy.

Anyway, I decided to give Stardew a try because, as you might know, I enjoy growing fruits and vegetables in my yard and have dedicated a decent amount of time to that project and to encouraging other folks to give it a shot. My thoughts as I downloaded the game were something along the lines of “So, you’re telling me that I can grow vegetables in real life, and then when I’m all showered and sore after a day of gardening, I can sit down and do that again, but virtually and in a cute, pixelated manner? Sold!”

When I loaded up the screen, I had some choices to make. You can only choose binary gender options in Stardew, so after staring at the screen for a while while pleasant game music wafted around my ears, I went with the Mars symbol because I did not want to hear she/her pronouns or have whatever might happen occur should I select the Venus symbol. I built my character to look more or less like I did at the time. Bleached hair, lipstick, dark clothes. Then, it was time to choose a name. I’d selected the Monster Farm because it sounded fun (this is actually a harder one for beginners because monsters bother you all night), and opted to, at long last, name myself not exactly the name that had been bouncing around in my head for some weeks or months, but “Spooky Nico” an allusion to Mulder and The X-Files, and, at the same time, a chance to inhabit a name I wasn’t yet ready to claim for my IRL self, but with less pressure, because I was being a little silly about it.

I’d never liked my old name, “Nicole.” When I was a kid, I would make signs and wear them around my neck to indicate to my mom what I would like to be called that day. Sometimes, I chose “Nick,” other times, “Nicki.” None of those seemed right, still, and I eventually settled on Nicole because it was plain and unobtrusive and common. In fact, when I’d asked my dad why they named me Nicole he’d told me that it was because it was a normal name so I wouldn’t stick out. Can’t have that, I guess. I feel like my emotional reaction to that is best described as “the thumbs up emoji.”

In the synth-laced world of the game, I planted and mined, fought monsters and brought villagers gifts through the calming rhythm of the seasons, delighting in all the small details and bits of world-building (aided by frequent questions texted to my sister) the villagers, as I interacted with them, often called me by name. It brought a tickle of pleasure to the back of my neck whenever they addressed me as Nico, or, well, “Spooky Nico.” 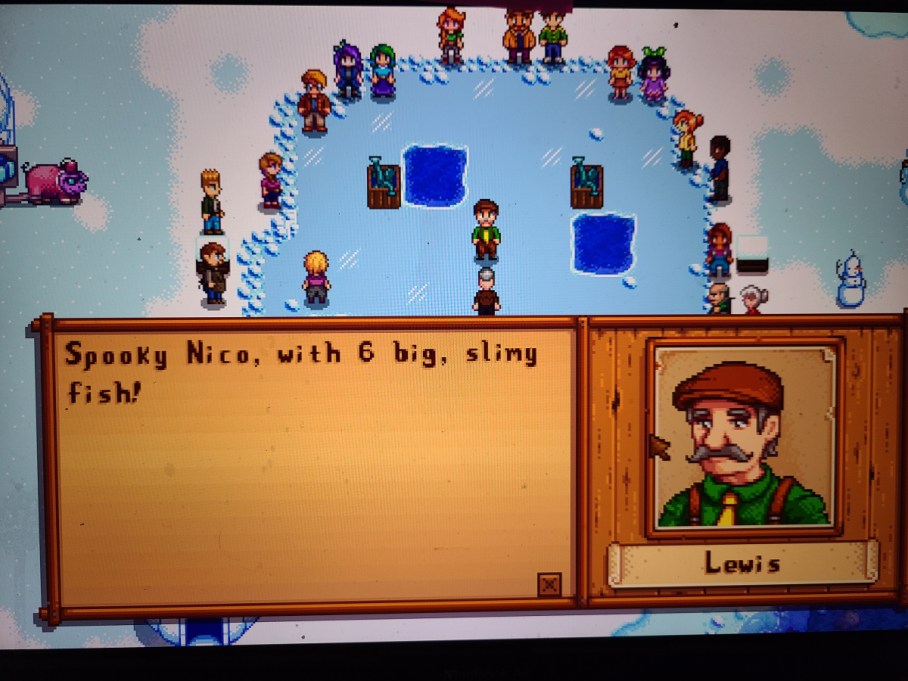 Such a common situation for me personally!

Everyone will tell you, when you start out with Stardew Valley, that there is no “right” way to play. It’s somewhere between a sandbox and a…IDK is it an RPG (with quests and stuff?). It’s a lot like queer time. In fact, the opening cut scene shows you, the main character, leading a life you’re finding increasingly dissatisfying — to the breaking point. You work in a mega office, and there’s even a skeleton at a desk somewhere if you can spot it. Your existence is a long, unending funeral dirge before you’re even gone. Then, out of nowhere, “Grandpa,” with his passing, leaves you a farm, and you give it all up to adventure in this mystical, lore-steeped valley where everyone already knows each other and they keep saying, “Hey! You’re the new farmer!” or something like that.

I’ve spent a long time perpetually being the new person. You can get used to it, and so, being the new farmer felt familiar. Having to introduce my “new” pronouns earlier that year scraped against me even more for that reason. I always feel new to myself, like a snake that’s just shed its skin, whereas everyone else seems like their skins are well-worn. I was hesitant to introduce a new name at the same time. I just don’t move that fast, but here in Stardew Valley, well, that was a place where I could plant radishes and fight monsters most of the time, and once in a while, gently inoculate myself with what, if I was being honest with myself, was going to be my new name. 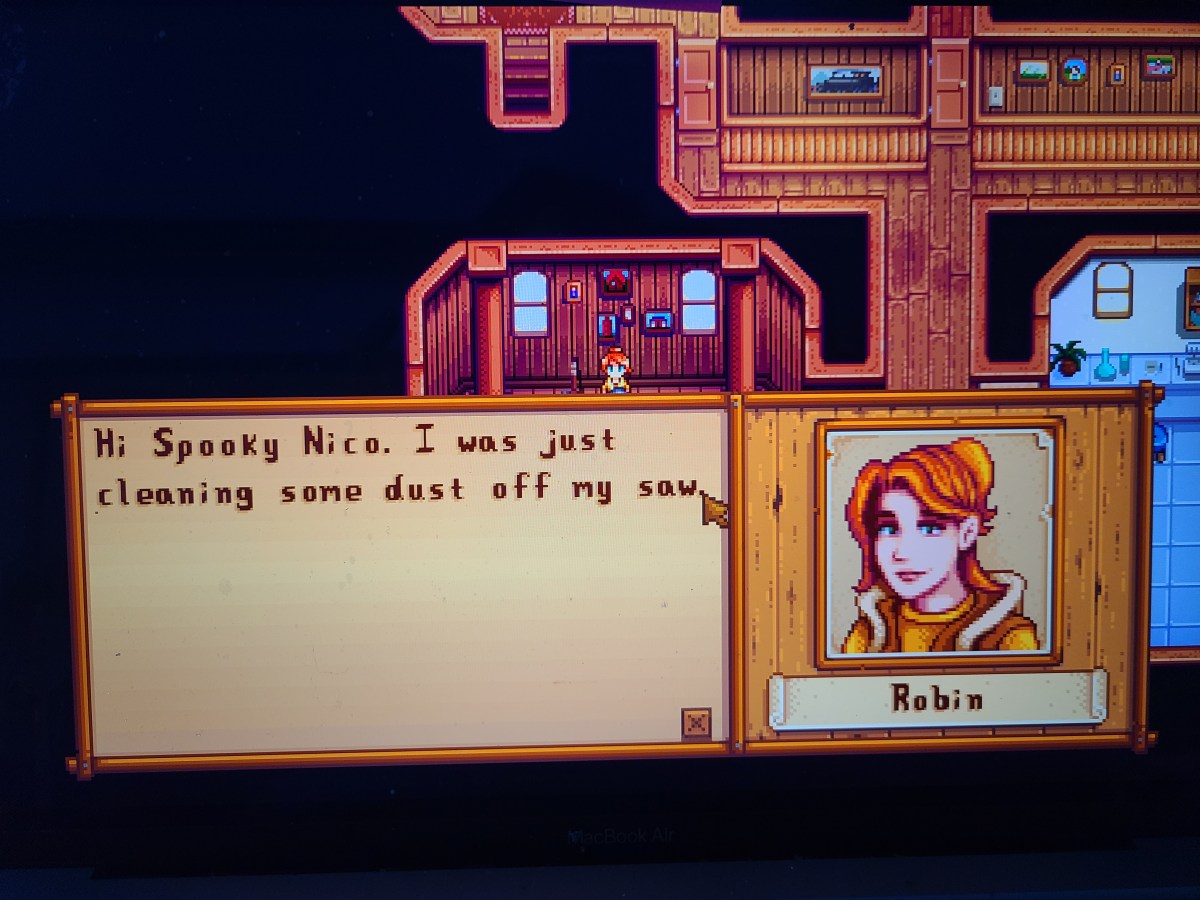 I should…probably clean my tools off.

The more I played, the more characters I made friends with, the more I liked my new name. I feel like popular lore is very “I knew exactly who I was” but in reality, at least for me, it’s a slow excavation, with brushes on dirt, archaeologist uncovering shards of pottery that will have meaning if they can just put them together, if they can just translate the marks. The slow play with my name allowed me to get comfortable with it, to think of it as my own, to not have to re-learn what I’m called in front of others. It didn’t feel closeted. It felt, in a way, mine, and partially realized, like a plant that just hasn’t flowered yet.

Something magical began to happen that summer. Art and life began to blur. We walked around and met more of our neighbors. One day, on a trek past the “Fountain of Youth” (I’m serious) and up to a small park, we met a neighborhood woman who was working in a vegetable garden in the park. She’d just harvested a bunch of garlic and offered us some. My girlfriend and I stumbled home giggling over our bonus garlic. When I went in the garden and harvested raspberries, I felt the same soft, repetitive joy of the game. Sometimes I joked that gardening was “LARPing Stardew Valley” and not the other way around. 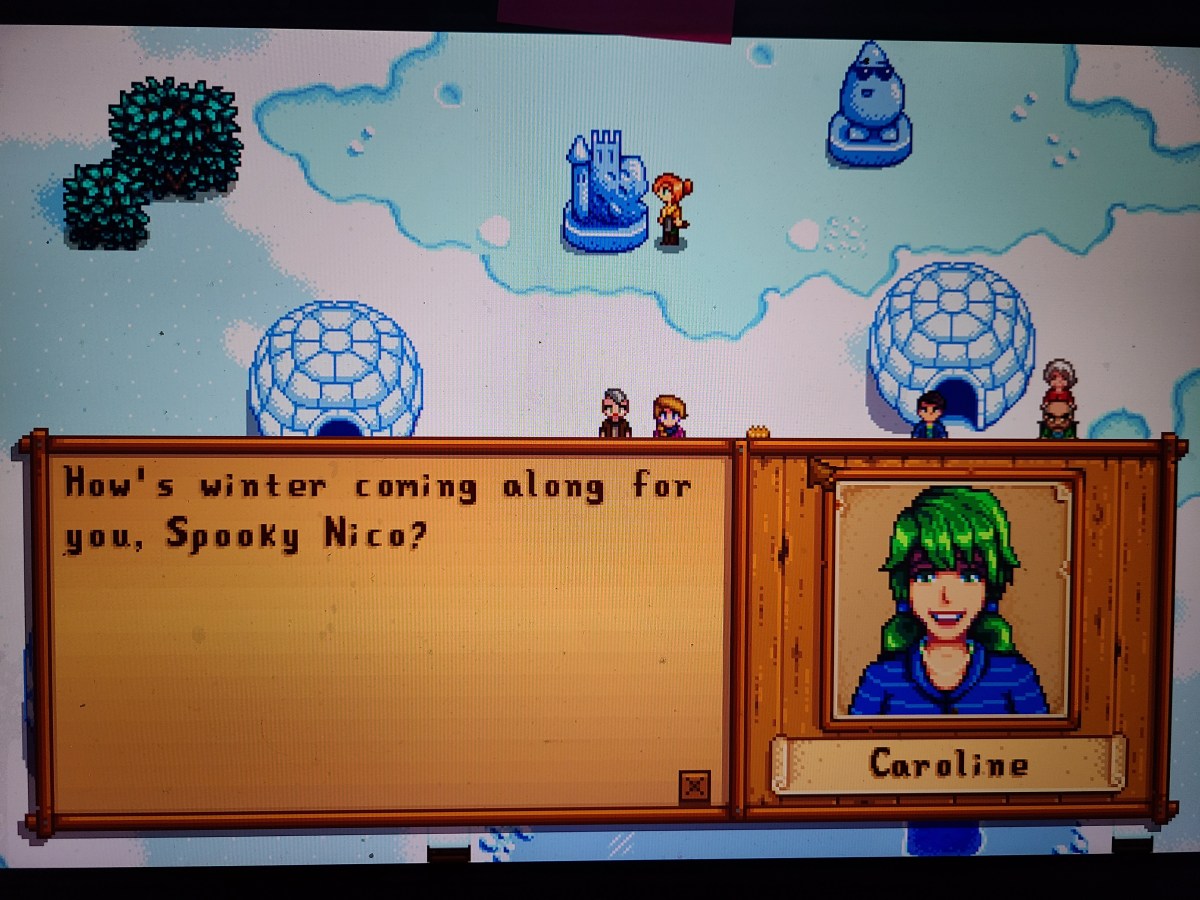 That bout of S.A.D. was really scary, but otherwise fine.

One day, about a year later, my (clearly very patient) girlfriend, again, asked me, “Do you want me to call you Nico, yet?” And I said “yes.”

A couple weeks after that, I asked most other people in my life to do the same, quietly updating my name on my social media profiles and, with Laneia’s help, on the Autostraddle website. When I announced my new name in the freeform Slack, Niko Stratis responded with “we should get jackets” and, in that cozy blanket of queer community, I felt at home in myself.

Play, in whatever form it takes, is an important part of our mental health. It allows us to do things just for pleasure, for fun, for joy. For me, playing a cozy game like Stardew Valley isn’t so much an escape as it is a chance to check in with myself, to recalibrate, to see how I’m feeling, and to give myself a wide space to process feelings that I’ve had to shove down for work or just survival. Giving myself the freedom to play a little Stardew also freed me up to further accept my more authentic self. I’m really looking forward to playing past year two and seeing if the dialogue ever, ever shifts to me not being “new.” 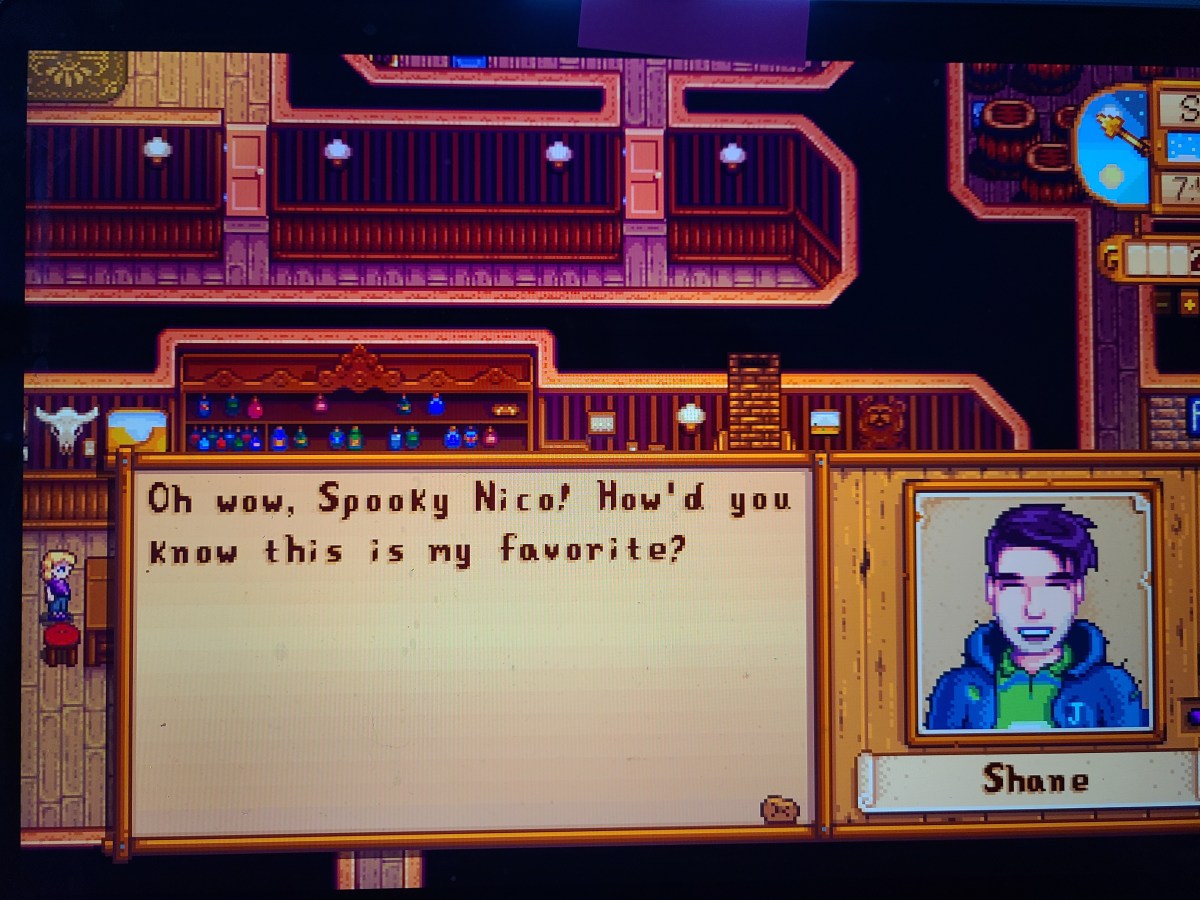 P.S. I curiously noted during the process of trying to gather screenshots for this post that not *all characters in Stardew frequently address one by name? Like I don’t think Pam has ever called me anything but “kid” and we’re BFF’s. Haley pretends not to know my name, etc. So, the characters showcased are characters I was able to get to call me by my name, on demand, for Autostraddle.

Nico has written 128 articles for us.