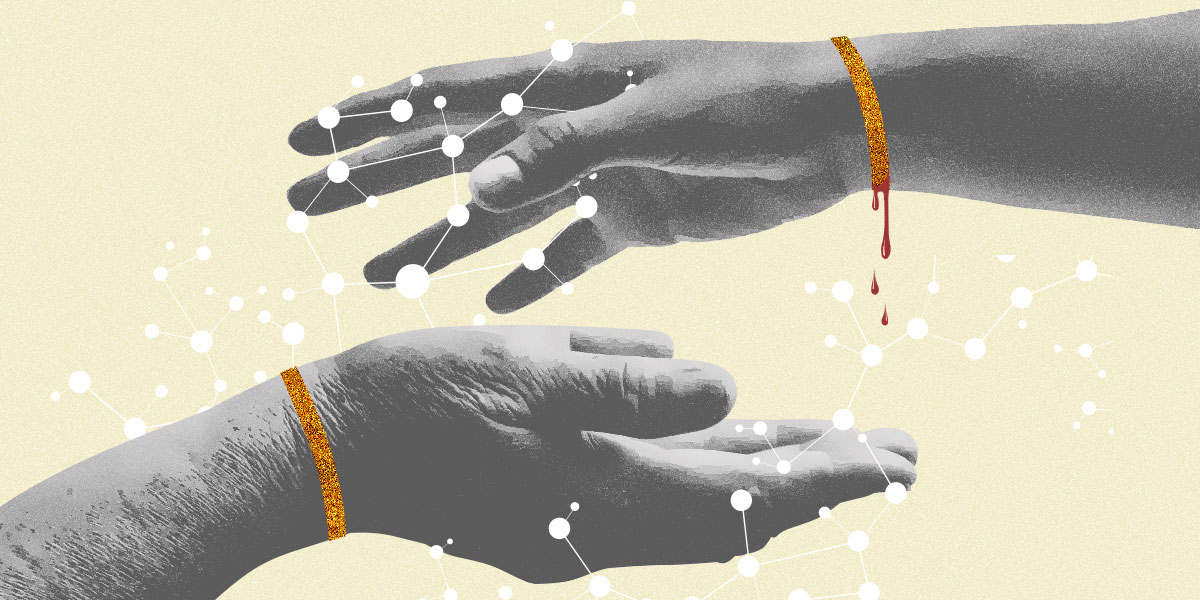 As the daughter of lesbian mothers, I always knew I had a sperm donor, and that I could meet him when I was 18. I loved my moms; I loved my queer family. Still, I had always wondered what part of me was cut from a different cloth.

On my 18th birthday, I wrote my donor an earnest letter. I was happy, I said. I didn’t need anything from him and would understand if he didn’t want to know me, but I was curious, and maybe he was too.

Meeting him was surreal. Above the chatter of a college-town coffee shop, we unspooled for one another the threads of our lives, and each new piece of information felt like part of my history sliding into place.

His name was Jonathan. Our stories had unnerving overlaps; there was an uncomfortable similarity in our demeanors. He had gotten his Master’s from the university right down the street from my house in Massachusetts; the timing wasn’t quite right, but what if we had seen each other from a distance on some alumni weekend? His son was adopted from the same place in Ethiopia as my cousin; my donor knew my uncle from mutual adoption circles. We were both shy, nervous and smiley, both seeking some sort of bond but maybe a little afraid of finding it.

The most striking similarity was our fingers. We had the same knuckles, the same gibbous fingernails. I tucked my hands under the table.

When I told him that I had spent my senior year of high school teaching myself Ancient Greek and that I spoke German and some French, his whole body seemed to light up. His mother spoke five languages, he said. I must have gotten that from her.

It took him two hours to get to the point. His mother, Toby, had come to America after the Holocaust. Something had happened back in Poland, something Jonathan himself didn’t know or wouldn’t talk about. My donor had an adopted son, but I was Toby’s only biological grandchild, and she was getting on in years, and would I be willing to meet her?

I thought that was awfully forward of him – wasn’t our whole relationship prefaced on the idea that we didn’t need anything from each other? But I was curious, so I said yes.

And so, some months later, my donor and I pull up in front of Toby’s one-story bungalow on a quiet suburban street in Albany, New York. I hesitated in the driveway, remembering my own grandmother, the one who had hosted all our Easter brunches and cousin sleepovers, who had taught me to love books and hate playing piano. I didn’t love languages because of a biological proclivity from Jonathan’s mom, I thought: I loved them because of my mom’s mom. Nurture. Not nature. Nurture.

Toby was older than my grandmother, frailer, more forgetful. She had an old-lady house that had never evolved past the color palette of the 1970s: dishes the color of pea soup, furniture a dark walnut, mustard-colored accent pieces. My grandmother was much more modern.

Over a dinner that the grandma I’d grown up with would never have made, I became increasingly certain that I’d made a colossal mistake. So what if I had the same fingernails as my biological father, the same cheekbones, the same smile? So what if his mother was a writer and so was I? These people were strangers. I had a family. Plus, the unseemly mechanics of sperm donation hung over every interaction, and I was having a hard time not blushing. It was simple.

Except it wasn’t, because we were blood. And even though we were strangers, blood meant something.

Jonathan left after we ate to give me some time alone with Toby. I scrutinized my new grandmother for signs of foreignness, but also for signs of trauma. What had happened in Poland? Besides a slight accent, any bodily hints of her past had been worn down over time.

Still, without Jonathan there, Toby was free to drop the act, to let herself be something other than “Jonathan’s mom”. She could be an immigrant, a refugee. She could be a woman who thought her bloodline ended with her son, only to learn that it extended just a bit further.

She took me on a tour of her home, pointing out not the photos of Jonathan and his brother but the art on her walls that came from her home country. We didn’t talk about her life. We talked about Eastern European literature and Russian art.

“Come downstairs,” she said, and I followed her into a musty but comfortable basement that was lined on all sides with floor-to-ceiling bookshelves. I stood by as the old woman bustled from shelf to shelf. Her fingers – the ones that, like Jonathan’s looked uncannily like my own — danced over each tome.

She plucked a well-worn hardcover from the shelf and handed it to me. Russian fairy tales. “You’ll like this one,” she said. Another book, thinner, newer: an analysis of Chekhov, Soviet-red, her name on the cover. A third book, a fourth. At first I resisted, but then it dawned on me: Each text was a piece of her history. She couldn’t tell me what happened to her in Poland, but she could give me Polish-English dictionary. We were book people, she and I. If our blood connection was to mean anything, it would have to be accompanied by a shared literary bond.

I let her read some of my writing, biting my fingernails as her eyes scanned the tiny screen of my phone. “I’m glad you’re a writer like me,” she said. “You’re not too bad. A lot of writers start out as journalists, you know.”

We piled Dostoyevsky, Chekhov, my new Polish-English dictionary and about 20 other books into a cardboard box, and Toby sat me down on her pea-soup-colored couch. She said, “I had these made for us.” She opened an elegant jewelry box to reveal twin copper bracelets.

They were roughly made, as though by some college kid who decided to take a metal-smith class for an easy few credits. Perhaps Toby herself had taken up metalworking as a retirement hobby, although it seemed unlikely given her frailness. Either way, her gift to me was a thin metal band, unassuming but as symbolic as an engagement ring. She slipped hers on easily, watching me expectantly.

Mine didn’t fit. I squeezed and pushed, trying to force the thing over my knuckles. “It’s fine, it’ll fit,” I assured her, biting my lip as the metal scraped off a bit of skin.

I wanted to be the descendant Toby was looking for, even if it meant drawing blood.

I drove the hour-and-a-half back to my parents’ house in total silence. No radio, no podcasts. I kicked off my shoes in the comfortably messy foyer. Our great buffoon of a black lab slobbered all over me; our big black cat eyed me from his perch on the dining room table. The rainbow flag fluttered reassuringly out the dining room window. This was where I belonged.

I saw Jonathan, my donor, a few times after that, but eventually it became clear that although our shared DNA was painfully obvious, we were a college-aged girl and a middle-aged man raising a young son, and we didn’t have that much in common after all. Once in a while, one of us will send the other an earnest email that always follows the same script: You’re on my mind. Meeting you meant a lot to me. I hope you’re well.

Toby, though, is a heavier psychic burden. I haven’t read the book she wrote; I haven’t cracked that Polish dictionary. I kept that bracelet tucked away in some stuff drawer or jewelry box through years of early-career moves. It’s as though the thing carries some sort of charge. Even touching it floods me with the guilt, the sense of obligation that I’ve carried since we met.

Who would I have been if I had grown up knowing her, knowing her story? Does it matter that I’m not Jewish, not Polish, but that I exist because of this bloodline? We don’t think about blood ties much these days, or at least I don’t. But it strikes me as incredibly tragic that if I don’t have kids, some part of her story ends with me. Is it presumptuous of me to assume some connection to that story, when in reality her son just jerked off into a cup? I don’t know if I love reading because one of my grandmothers held me on her lap and told me stories, or if my other grandmother, a stranger, gifted me that love through her DNA. Not knowing kills me. Not knowing is the reason I wrote a letter to my sperm donor in the first place.

In the process of writing this essay, I fished the copper bracelet out of my “sentimental old stuff” box, examined it for some hint of clarity, pushed it up against my knuckles to see if this time it will fit. I’m not going to have kids. Toby’s bloodline dies with me. But I am getting my Master’s in journalism, and we are book people. So in some ways, perhaps in the way that matters most, I’m living out her legacy in the way that’s in our DNA.

Sydney Boles is a candidate for a Masters of Journalism at Medill School of Journalism. She writes about homelessness, housing insecurity and gay stuff. You can follow her on Twitter @sydneyboles.

Sydney has written 1 article for us.