For years I’ve longed to see myself on television, but I quickly realized there’s a lack of BIPOC queer comedy series being greenlit in Hollywood. I realized if I wanted to see a funny, adorably awkward bisexual woman stumbling up the corporate ladder while still living her best messy queer life with her friends. I would have to create the show I desired. As an Upright Citizens Brigade alumni, I had just graduated from the improv program and decided to begin my writing journey. I wrote a three minute sketch (which would eventually become Episode 4 of #TMI) about Aaliyah Jones, a bisexual woman who tries to mend her broken heart (after her girlfriend Simone broke up with her) by jumping back into the dating pool. As Aaliyah prepares to go on a date with a guy she considers to be her next boyfriend, chaos ensues once she discovers a grey pubic hair. Aaliyah scrabbles to resolve this problem and seeks the guidance of her gay roommate Pharrell Hall, played by Donzell Lewis.

Donzell and I had so much fun shooting this sketch that I turned to him and said, “I want to write a series of bizarre and inappropriate situations that our characters are faced with and have to overcome.” I created #TMI: A series that’s like the beautiful queer love child of a throuple including Noah’s Arc, Insecure and Sex in the City. Transforming a three minute sketch to a web series was fun and challenging. As the showrunner & executive producer I had the freedom to hire my talented friends. The challenges were not having a filmmaking background. The only experience I had was directing a one-minute short that premiered at Outfest Fusion in 2019. My desire to create a funny and diverse show outweighed fear and merit. 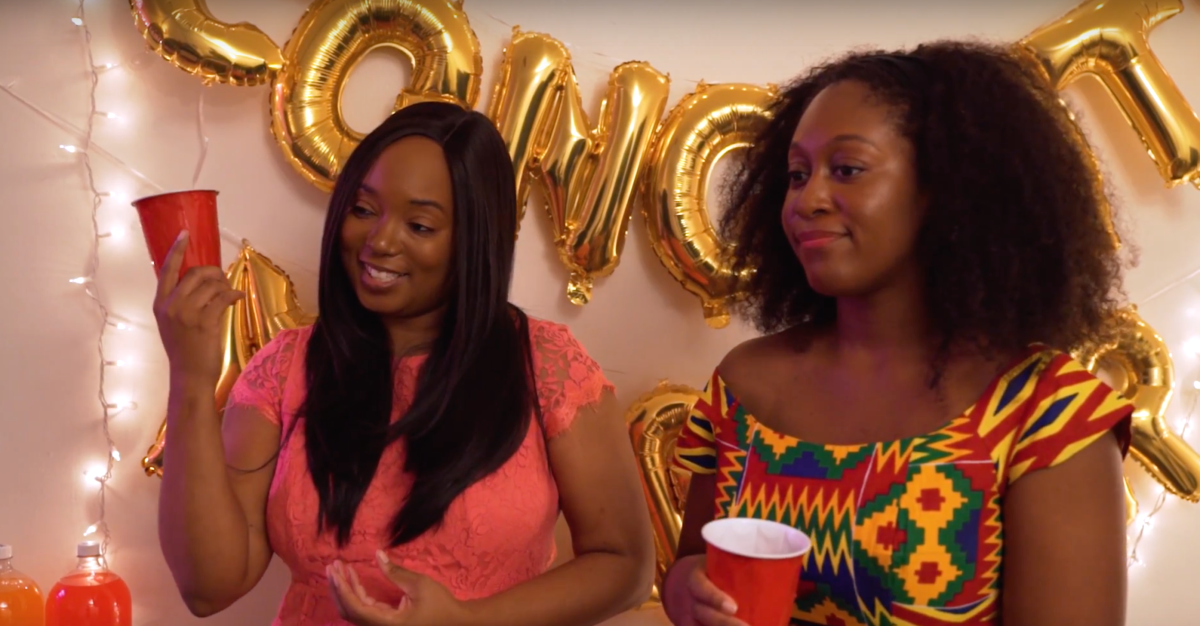 I began to network across my inner circles, and through networking I was able to build a team. I reached out to my community and my friends were kind enough to lend me their boyfriends, girlfriends and partners. I sat down and flushed out ideas and storylines. As a writer and activist, I felt a huge responsibility to highlight how intersectionality and the complexities surrounding race, gender, sexuality, and religion play an immense role in the way BIPOC people think and operate in the world. Capturing these aspects of my life and transitioning them into a comedic setting was challenging because you’re pulling from painful and personal experiences. For example, the office scene in Episode 1 is not only my favorite scene but our fan’s favorite scene as well. For BIPOC individuals, the workplace can be a toxic & triggering work environment. This is the third time Aaliyah has been up for a promotion at the production company she works for. With over 5 years invested in the company. plus fulfilling all of the qualifications, she’s ready to transition from staffed writer to story editor. Everything is riding on this promotion. Her older sister has cut her off financially, and the love of her life Simone has moved to Berlin for a job. Never in my wildest dream did I ever think I’d be writing about code switching and generational trauma. I was terrified to write this scene, but I used my sketch background to take you into the mind of Aaliyah, who’s battling with her three distinctive personalities. Slave Aaliyah (played by Dashia Magee) symbolizes Aaliyah’s depression and generational trauma. Public school Aaliyah (played by Jacquelyn Joyce Revere) represents the warrior side of Aaliyah who’s ready to defend herself and Code Switch Aaliyah (played by David Brandyn) represents the professional side of Aaliyah. This side of her personality is ready to adapt to any situation you place her in. I’m so thankful that when Aaliyah’s three different personalities debate on whether she should stay or leave her current job, Aaliyah’s oppressed side musters up the strength to speak up and decides what’s best. Our fans love this moment, because as people of color we’ve been in these situations time and time again.

It’s surreal to revise a script several times and then see your words come to life when you call “action.” There’s nothing I can compare it to besides pure bliss. As #TMI continues to travel digitally to film festivals due to COVID-19 restrictions, I’m currently reliving that surreal experience through new fans of #TMI sliding into by DMs begging for episodes 3 & 4. Episode 2 ends on a cliffhanger that has a lot of you in y’all feelings. Trust Aaliyah is definitely in hers! I have read all of your beautiful DM’s and we will be releasing more episodes soon!

For my Bi/Pan/Fluid/Queer siblings, #TMI is my love letter to us! It showcases the beauty of Black and Brown love, queer BIPOC’s, people with disabilities, body positivity, and our beloved transgender and non-binary siblings. I believe all audiences will be able to relate to the stories that are being told. For the queer people of color who are often underrepresented, please know that I see you. I write and create for you. As long as I’m here, you’ll always be seen.

Ashlei Shyne is an Actress, Improviser, Writer, Producer and Filmmaker who was born in Dayton, Ohio. She is best known for her roles in “Dyke Central” and “Johnson’s Family Dinner.” Ashlei has appeared in several national commercials and print ads. She has studied at Upright Citizen’s Brigade, IO West and Second City. After recognizing the lack of LGBTQ+ representation within the comedy community, Ashlei decided to create Rainbow Bright Comedy, an LGBTQ+ improv troupe, in order to give Queer BIPOC's a platform. Ashlei has performed in and written for countless improv/sketch shows and competitions. As an out & proud Black bisexual woman, Ashlei continues to use her unique voice and perspective to fight racism, bi-eraser and bi-phobia in all communities. She continues this conversation with her new comedy series #TMI. Website Instagram Twitter

Ashlei has written 1 article for us.