Sometimes you look up and around in your life and everyone who was there before was gone, and that is what being alone is. Sometimes you have always been alone because you like it better than people. Sometimes you want to be alone sometimes. Sometimes being alone is hard because of how other people look at being alone. You know about this. Poet Tanya Davis knows this too, and she made a poem/video/moving doodle/piece of art about it. She wants to help you figure out how to do this, this being alone. Her advice ranges from what some have called the slightly “twee” (for instance: dancing alone in a bar) to the more practical, the more gutwrenching (“You could be, in an instant, surrounded if you needed it… there is heat in freezing. Be a testament.”) . You can watch it for yourself here (via Jezebel):

+
Davis’s poem and the video, made by filmmaker Andrea Dorfman, has garnered almost a million views on youtube, which to me says that it gave a lot of people a lot of feelings. Maybe it gave you some feelings, too. But you’re going to have to put those aside for a minute and simmer down, because A Man has also viewed this video, and he needs to share his thoughts.

According to Russell Smith, this video/poem isn’t quite the whimsical-but-brave declaration of independence that it first appears to be. It’s actually a betrayal of feminist ideals, predicated on the idea that “women are weak” and not inherently capable of being on their own, and therefore need explicit instructions on how to handle this. He assumes it is “about dealing with the angst that comes after a breakup,” and says that, “Basically, I consider this kind of pair-bonding-obsessed weepiness to be anti-feminist, retrograde and disempowering to women.” According to him, the title of the work – “How To Be Alone” – isn’t an artsy-but-honest move in the style of Nick Hornby’s How To Be Good or Lorrie Moore’s “How To Be A Writer” or even in the same spirit of Jonathan Franzen’s How to Be Alone – but an instruction manual for a hypothetical audience of women who are terrified of waking up alone without a boyfriend or husband or even sleazy one-night stand by their side. According to Smith, it’s downright insulting in its underestimation of and patronizing attitude towards its assumed-to-be female listeners. (@globeandmail)

I actually read that piece, and Jezebel’s deconstruction of it, before watching the video for the first time. With his article in mind, and with Jezebel’s description of the piece as “a statement on self-nurturing and not depending on others to help you lead your life—to love yourself without having to be validated by the love of someone else,” I watched the video prepared to play a mental game of bingo with references to marriage, spinsterhood, being a strong single woman, Beyonce, etc. To my surprise, none of those things were mentioned! In fact, gender wasn’t even mentioned. Relationships weren’t a focus. The word “dating” was used once, but i can’t find a single reference to a single breakup. As Jezebel notes, although the person the camera follows appears to be female-bodied, there’s no indication from the wording of the poem that we’re talking about a woman, or that the poet is talking to a woman. As far as I can tell, this work could just as easily describe an elderly man whose children have all moved out of town as a single woman yearning for matrimonial validation.

The disconnect between Smith’s outrage at the “anti-feminist” poem and the tender, courageous, virtually genderless thing I had just watched was completely mystifying. It was as though Smith had watched some other film, one where the person in the frame goes through the painful dissolution of a heterosexual marriage, and then immediately afterwards the painful dissolution of an intense rebound relationship, which she unpacks over the course of the film with a series of (mostly male) friends, and ultimately ends up looking for love again because being alone isn’t sustainable as more than a temporary condition.

And then I realized that that film actually exists, and Smith had chosen to protest this video instead, and I was just totally lost. 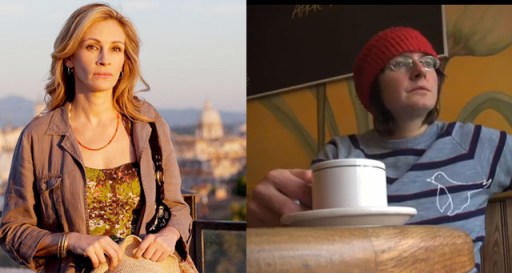 As a disclaimer, I’m not here to hate on Eat Pray Love. I have read significant portions of the book and enjoy them. While I don’t think it’s life-changing, and while I’m following the stories about the accusations leveled against Gilbert’s guru, I think Ms. Gilbert is a lovely and intelligent person, and I’m appreciative both of her work and her strong support of LGBT rights. But ultimately, Eat Pray Love (the book, at least, and I suspect also the movie) is about learning how to be alone without a man, without a series of men, and “How To Be Alone” actually isn’t. At all. And while Smith is just one man on the internet, and his views don’t necessarily represent any kind of majority opinion, I still think it’s worthwhile trying to figure out how he accomplished this Freaky Friday-esque switcharoo.

While the Eat Pray Love franchise has been wildly successful for a number of reasons, including Gilbert’s genuine talent at writing and her compelling personal story, I would argue that it’s become so popular mostly because it gives us the story of a woman who puts herself first – before a man, before a marriage, before a family. Especially within the book, this is indisputable. Gilbert goes into great detail about how much she knew she was supposed to want to settle down with her husband and future children forever and ever, and how painful was the growing knowledge that that wasn’t what she wanted. 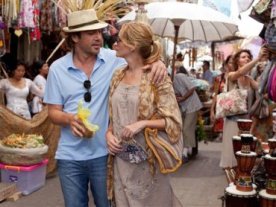 This is poignant, and her eventual acknowledgment of this fact is admirable. Without discounting the importance of Gilbert’s decision, though, it can’t be removed from its context: it’s a story about choosing self over prescribed generic femininity, a world of your own making over the deeply patriarchal American upper-middle class. Even if it’s ultimately about rejecting it, about defining yourself, this story can’t exist without heterosexual relationships, without the knowledge that that is how we are supposed to be defined. And in this way EPL walks a delicate line; it introduces us to something new and special without removing us from the world we already live in, a world where the only way to truly find yourself as a woman is with a divorce lawyer.

“How To Be Alone” does not exist in this universe. I don’t know what universe it exists in. There are no husbands there. There are no divorce lawyers. Do you know why? Because you’re alone. It’s not about the people who were there before that made you not alone, or about theoretical future people who might be around you to make you not alone. That’s not how things are.

How things are is:

You’re alone, and you need to know how to do that. There is no paradigm that this work of art exists in; it doesn’t address a specific social problem or speak to a certain group, unless you include “23-year-old girls who wear glasses and use tumblr and read Jezebel and Emily Gould” as its target audience. (And I don’t know if I would; Davis doesn’t strike me as a Jezebel reader.) There is no patriarchy here; there are recorders and mittens and train tracks.

I have nothing to go on here other than gut instinct, but my gut instinct says that this shiftless, uncategorizable quality made Smith feel weird and uncomfortable. He didn’t know what Davis was talking about, or where she was coming from. In the absence of any context or clues about how he was supposed to read this, I suspect that he made up some of his own. I think he superimposed his own ideas onto this – that it was made by a woman, that it was about feelings, so it must be for women; and that when it talked about being alone, it really meant “without a man,” because aren’t those the two discrete states that women exist in? Alone or with a man? Alone/with man? Aloneorwithaman? What else could there be? Even after doing this, though, maybe he still felt a little weird and confused, maybe it still didn’t make a lot of sense. And so armed with his newfound insights, he went on to tell the rest of the internet how to feel about this and that they shouldn’t take it seriously, because they might not know what’s feminist or not feminist without a man to tell them.

Smith writes that “…the reason this video’s popularity irks me is that I see this backsliding everywhere around me. I see all the blogs and books about being single and finding a husband and surviving divorce, written by educated women in this world in which women can do anything and I wonder if the 1960s ever happened. There is an obsession with romantic commitment in the air again.” There are a number of things that can be said about this – for instance, how glad I am that men are now such enthusiastic supporters of feminism that they’re motivated to exhort women to start doing feminism better, because clearly without some pointers from them we’d be back in 1920. But more importantly, if this is really how he feels, is this one poem put on youtube by two women really the place to fight that battle? Does that make sense? I think no. (It’s comforting that so far at least, the commenters on the article seem to agree.)

As Davis herself says, “Society is afraid of alone.” This is the only explanation I can think of, because if Smith were genuinely concerned by presentations of women who flounder outside of heterosexual relationships, it’s kind of unthinkable that one of the biggest cinematic events of the year, a movie that happens to deal with that very topic in a very upfront way, would just slide right off him like water off a feminist’s back. My guess is that everything about Eat Pray Love in fact feels fine to Smith, because it all sounds so familiar; a woman who’s self-assured and comfortable in her singlehood, but had an emotional uphill battle to get there, and who ultimately ends up in another committed hetero relationship, albeit a very healthy and enlightened one. Because that’s what feminism is, right? Learning how to be alone, but only for as long as you can afford to be.

Other Reading:
Party of One: The Loners’ Manifesto, by Anneli Rufus

Solitude: A Return to the Self, by Anthony Storr

Eat, Pray, Love: One Woman’s Search for Everything Across Italy, India and Indonesia, by Elizabeth Gilbert