My new gal pal took me on a date to a dueling piano bar, which was a great idea. I love tacky shit and cover songs and cheap whiskey, and my GP knows this.

We were immediately enchanted by the place, Louie Louie’s in Deep Ellum. The two guys on the pianos were playing a country song I didn’t know, and then after some banter they launched into that one Eve 6 song. I was riding high with a whiskey Coke, my favorite denim vest, a gorgeous woman and all the audience participation I could handle.

Soon, in a trickle and then a gushing stream, the jokes started – a comment about roofies here, an innuendo about duct tape there. No one laughed, and the performers seemed miffed. “Tough crowd, I guess they don’t like rape jokes,” said Joey to Jeremy. I guess we didn’t.

We kept thinking they’d stop, you know? But then they launched into this very elaborate version of “Don’t Worry, Be Happy,” where they wrote their own lyrics to make fun of different people in the crowd. They avoided our table for a while. My GP is a lesbian and I look like one, whatever that means, and I guess it’s hard for straight guys to make sex jokes about lesbians. But it was early, and there were only about a dozen guests, so Joey gestured to me and remarked about having screwed me, and I rolled my eyes good naturedly.

“And now it hurts when I pee.”

And I cracked a smile.

“But don’t worry, it was good for me. I guess probably not for you…”

And I winked and shook my head.

“That’s why they make roofies.”

Jokes about raping dykes — to straighten us out, to control our bodies, or just for sport — have been around for as long as straight cis men have been raping us. Our heternormative culture hypersexualizes queer and trans women and gender-nonconforming people while stripping us of sexual agency and denying the legitimacy of our sexuality. This makes sexual violence against us seem semantically impossible, even though it’s rampant. Emily Waters, the research and education coordinator at the National Coalition of Anti-Violence Projects, said there really aren’t numbers or resources that relate to sexual violence and harassment against queer and trans people, but anecdotally, we know it happens constantly. NCAVP does gather data and release reports about Intimate Partner Violence in LGBTQ and HIV+ populations and about hate violence against us. 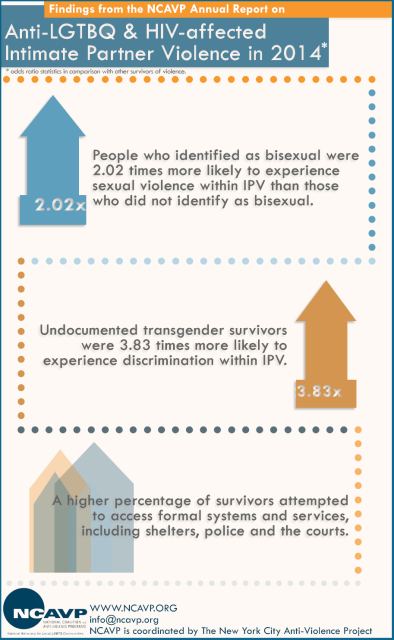 There at Louie Louie’s, I wanted to shrink into nothing. I just sat there and didn’t clap or laugh or react at all. GP wanted to say something to him, and my brain was screaming at me to leave, but instead we stayed for another hour, even through the next duo’s jokes about how women can’t drive. I nailed every word of “Want You To Want Me” by Cheap Trick from our table at the front, and the performers were very impressed. Our side of the room definitely won the loudness contest during “Living On A Prayer.”

I should have bolted. My feminist brain is mad at me for giving audience and energy to violent people. I stayed because I was having a good time, and I knew I could never go back there after that night. I wanted to make the most of it. I wanted to insist on my right to be somewhere that had already denied my safe welcome.

This is not a specifically queer problem. The discussion about rape jokes came to a head in 2012, when Daniel Tosh said it would be funny if an audience member got gang raped. He weakly apologized while many industry leaders raced to his defense. Women comedians, like Lindy West, have been consistent and vocal about fighting back against a culture of misogyny in humor.

And although it’s not often spoken of, it is uniquely insidious when rape jokes are made at the expense of LGBTQ people: It’s one of many ways that our straight cisnormative culture asserts its dominance over our bodies, our stories and our sexualities. Bi women in particular face heightened risk of sexualized violence and harassment. Repeated reports, like this one from LGBT MAP, have shown bi women experience higher rates of sexual assault and intimate partner violence than cis lesbians and straight women. Based on anecdotal data from bi victims, cis men see bi women’s sexuality as threatening and use violence to assert control. Waters said,

“Sexual violence humor minimizes the experience of sexual violence, and that, in combination with this hypersexualization of LGBTQ women and of bi women, especially, can often make survivors feel like ‘maybe what happened to me was my fault’ and also ‘maybe it’s not as bad as I thought it was’ because it’s being minimized by the greater culture.”

I sat in that bar as a bisexual woman holding hands with my butch girlfriend, who herself has survived incidents of sexual violence, while a guy with a microphone told a playful lie to a room full of strangers about fucking me without my consent. He didn’t know our stories, and from his piano bench he wouldn’t have cared to. If he had known that I read and write about the horrific violence against my community by day and process the trauma of that work in my journal by night, maybe he wouldn’t have said it. But I bet you he would have resented the implication that he shouldn’t.

So much of my personal universe is queer, and I’m pretty good at navigating the rest of the world with my bisexual genderqueer heart in ways that make me feel safe. I think most people are easily confused but basically good. Joey the piano player meant harm. He read the room, he read me, and instead of changing the subject, he dug in and made it personal. I guess that’s his schtick, and it’s a gruesome one. I could have told him that. I could have heckled or sent up a note disguised as a request or found him at the bar between sets.

But instead I’m writing about it on the internet. Maybe that makes me a coward.

In that moment, though, I couldn’t internalize what happened. I couldn’t respond with anything but mild disgust, because I couldn’t allow the threat to be realer than that. The crushing anxiety and fear came later that night, and the next day, and every day since. Where is the line between a joke and a threat? What if next time there’s not a piano in between me and the asshole who thinks it would be hilarious to rape the dyke when their girl isn’t around?

We don’t need data to know how constant and ugly this problem is. All we have to do is talk to each other and we’ll find that we and the people we love are having these experiences. I hope we find ways to talk louder, to talk so loud we drown out all the rape jokes until the people who make them take a hike, or maybe even come up with something funny to say.