“I once told Martin that although I loved being his wife and a mother, if that was all I did I would have gone crazy. I felt a calling on my life from an early age. I knew I had something to contribute to the world.” Coretta Scott King, quietly known as the First Lady of the Civil Rights Movement, is most famous for being her husband’s wife. She’s seen in photos more than she’s ever heard in video. She’s remembered as elegant, demure, classy, perhaps even stoic in her strength.

Despite, as King biographer Clayborne Carson once put it, being “more politically active at the time they met than Martin was,” she’s often more discussed for her iconic Jackie Kennedy level wardrobe than for leading more than 50,000 marchers through the streets of Memphis just four days after her husband’s assassination. Three of her four children were by her side.

On the most famous day of Dr. King’s legacy, the 1963 March on Washington, Coretta Scott King sat silently in the second row. According to the Smithsonian’s oral history of the march, she was mentioned only once that day, in passing, despite a lifetime of investment in racial justice dating back to her teens. As a college student she was a member of the NAACP and the Race Relations and Civil Liberties Committees. In his early letters to her, Martin noted that his first attraction to Coretta was her political mind. He thought of their love as a partnership.

That partnership wasn’t always equal. Much like the other women who were, by Scott King’s own estimation, the “backbone of the whole civil rights movement,” she was expected to work in shadows. Ella Baker, Diane Nash, Fannie Lou Hamer and so many more have only recently begun to be given their proper due in history. For Scott King, the process of coming to the public light began in the days after her husband died. 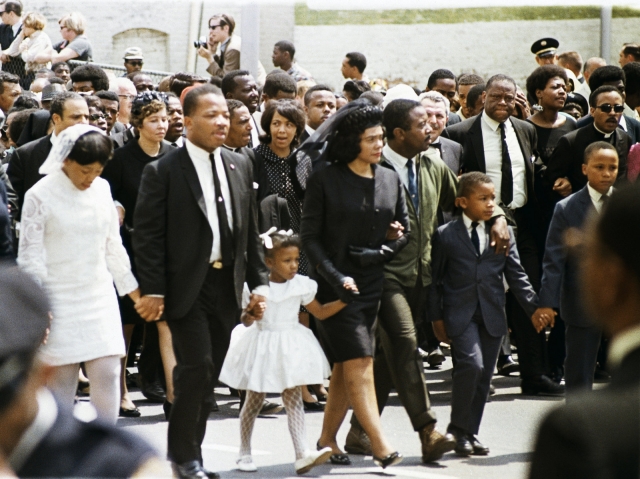 Coretta Scott King with her children at the funeral service of Martin Luther King, Jr.

On April 8, 1968, four days after Dr. King’s death in Memphis, Coretta Scott King flew to the place of his murder and lead a protest memorial in a black lace headscarf. She’s reported to have said, “I need to go finish his work. I’ve been with him as a partner on all these other marches and confrontations. I feel like I need to go.” Her eulogy at his funeral was televised to more than 120 million people. Three weeks later, she delivered his planned speech at a protest against the Vietnam War in New York’s Central Park. Two months after that, she led the Poor People’s March to Washington in her husbands name. King had originally conceived the march in hopes of forcing the US government to confront the realities of American poverty. Coretta’s analysis highlighted intersections of class, race, and gender that often kept black women poor and undervalued.

She went on to become the first woman to preach at Great Britain’s St. Paul’s Cathedral and the first woman to deliver the class day address at Harvard University. She created the Full Employment Action Council and the Coalition of Conscience, two governing bodies that brought religious organizations, businesses, and human rights groups together to work in favor of national policies on access and equality. She founded the Martin Luther King Jr Center for Nonviolent Social Change, a cornerstone of her and her husband’s lasting legacy. For Scott King, an key part of that legacy was carrying King’s name into the fight for LGBT equality. 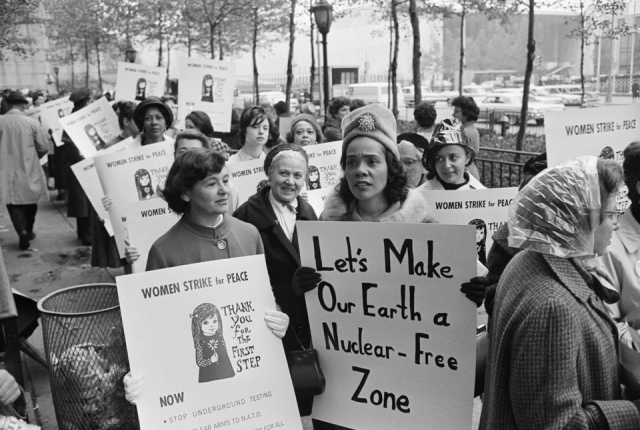 In 1983, on the 20th anniversary of her husband’s March on Washington, Scott King pledged her support for the Gay and Civil Rights Act that was then before congress. The groundbreaking bill would have prohibited discrimination against gays and lesbians in housing, employment, and other public accommodations protected by federal policy. When questioned about this turn in her activism, Scott King reminded naysayers that many gays and lesbians had given their all to the civil rights movement (including perhaps most famously Bayard Rustin, an openly gay black man and lead organizer of the 1963 March on Washington). She felt it was her duty to offer support in return. Later that year, Scott King purposefully made space for black lesbian poet Audre Lorde at the march’s anniversary rally. The good Lorde spoke:

In the mid-1980s, when President Ronald Reagan wouldn’t even acknowledge the disease, Scott King – with the help of her assistant Lynn Cothren, an openly gay man — used the King Center to create a welcoming environment for the LGBT community, especially queer black people who were suffering in the middle of a generational genocide from HIV/AIDS. After the death of a close gay friend, she hosted a day of memorial at the Center and encouraged participants to sew stitches on a panel that would become part of the AIDS memorial quilt.

In 1986, in response to the Supreme Court’s decision in Bowers v. Hardwick that there was no constitutional right to engage in homosexual sex, Scott King accepted an invitation to be a featured speaker at the September 27, 1986 New York Gala for the Human Rights Campaign Fund. In 1993, she held a press conference urging President Clinton to end the ban on gays serving in the military. In 1994, she stood with Senator Ted Kennedy and Representative Barney Frank as they introduced the Employment Non-Discrimation Act (ENDA), which among other things would have prohibited workplace discrimination on the the basis of sexual orientation.

On March 31st 1998, at the 25th Anniversary luncheon for the Lambda Legal Defense and Education Fund, King spoke out against strands of conservatism in black communities that had kept some members reluctant to join the gay rights movement. She stated, “I still hear people say that I should not be talking about the rights of lesbian and gay people and I should stick to the issue of racial justice… but I hasten to remind that Martin Luther King, Jr. said, ‘Injustice anywhere is a threat to justice everywhere.’ I appeal to everyone who believes in Martin Luther King, Jr.’s dream to make room at the table of brotherhood and sisterhood for lesbian and gay people.”

The next day, April 1st 1998, at the Palmer House Hilton in Chicago, she added: “Homophobia is like racism and anti-Semitism and other forms of bigotry in that it seeks to dehumanize a large group of people, to deny their humanity, their dignity and personhood.” She echoed these sentiments time and again until her passing.

In 2004, during the middle of a heated national debate on same-sex marriage and a proposed constitutional amendment endorsed by President George W Bush that would have defined marriage as between a man and a woman, Coretta Scott King spoke out again. She called the proposed amendment tantamount to “gay bashing.”

While her eldest daughter, Yolanda King, took up Coretta’s mantle of activism for gay rights, her youngest daughter, Bernice King chose a different path. In the middle of the same 2004 debate for marriage rights, the younger King besmirched that her father “did not take a bullet for same-sex marriage.”

In part these comments fueled a fire between the King siblings, pitting Yolanda and Dexter against the more conservative Martin Luther King III and Bernice. After their mother’s passing in 2006, the siblings fought over the sale of the King Center in Atlanta. The dispute was ultimately settled by Yolanda’s untimely passing due to complications from a chronic heart condition in 2007. Currently, Bernice King remains the CEO of the Center.

Still, the legacy of Coretta Scott King’s lifetime commitment to the hard work of social justice cannot be overturned. Last year on Martin Luther King Day, I reflected that the work of justice never ends. The only way forward is for everyone to roll up their sleeves and fight another day. It’s uncomfortable, off-putting, and absolutely necessary. No one better embodied that message than Coretta Scott King, who spent the 40 years after her husband’s passing not laying back and honoring him peacefully. Instead, she fought every day. And for those last 20 years? She fought for US.

Coretta Scott King understood how she was best remembered, that many were satisfied to consider her a relic of the past. She then turned that legacy on its head, “I am made to sound like an attachment to a vacuum cleaner, the wife of Martin, then the widow of Martin, all of which I was proud to be. But I was never just a wife, nor a widow. I was always more than a label.” She leveraged the weight of her husbands name and, in the true spirit of an ally, never asked for a thank you or a spotlight as she hefted that name in our corner so that we could build on his good work.

I cannot think of a better memorial for her husband than to honor her today.