Fusion TV recently reported that 80% of Central American women and girls crossing the Mexican border to come to the United Stated are raped. This statistic is based on the reports of migrant shelter directors, though it is possible the number is even higher due to underreporting.

Amnesty International estimates that, overall, 60% of women are sexually assaulted while crossing the border. The UN Development Fund for Women puts that number at 60-70%. Central American women have to pass through two highly militarized borders in Guatemala and Mexico to reach the U.S., which may be why the 80% number is higher than overall estimates. Some have even estimated the numbers to be as high as 90%.

If you haven’t been following the issue of sexual assault at the border, this may be shocking. However, advocates have been sounding the alarm for decades. Lawyer and advocate, Elvira Gordillo, says she “think[s] almost all of the women are abused on the way north,” and that women “know the price to pay for getting to the United States. The prices is being sexually violated.” Prosecutor Gabriel García, of Huixtla, Chiapas, says there are hot spots along the trail for sexual assault and that in some cases, women and girls even prepare for it. Garcia says, “There have been times where women will take contraceptives beforehand, so if they become a rape victim, then they won’t end up pregnant.” 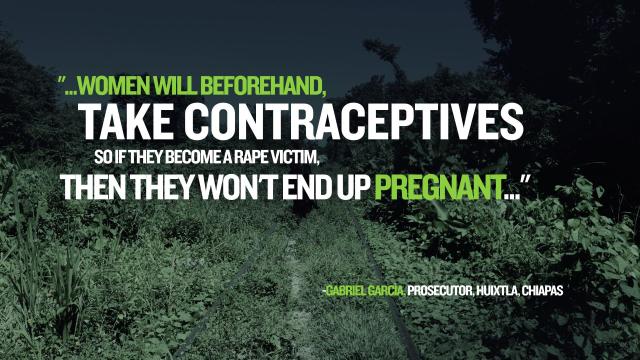 Perpetrators can be so-called coyotes — the men who take immigrants across the border, other immigrants on the trail, criminal gangs, sex traffickers, and government officials. Girls and women traveling alone are at the greatest risk. According to a July 2014 study by the Pew Research Center, based on reported apprehension numbers from Customs and Border Protection (BP), the number of unaccompanied Central American girls under the age of 18 arriving at the U.S border is up 77 percent. The number of apprehensions at the border is skyrocketing even faster for girls 12 and younger, increasing 140% over the last year.

As you can imagine, few choose to report their sexual assault. Many immigrants are too scared or intimidated to come forward. It may be preferable to stay silent than risk further abuse or future threats on their life or the lives of their families back home. They may be forced into silence by the perpetrator, especially when the perpetrator has authority over them like a CBP agent, Immigration and Customs Enforcement (ICE) agent, or other government official. Even once they reach the U.S., reporting violence could trigger deportation.

This rampant abuse at the border does not happen in a vacuum. U.S. immigration policy plays a large role in perpetuating violence against women. While there has been some effort to prosecute coyotes who perpetrate sexual abuse, the government has done little to curb the issue of sexual abuse by BP and ICE agents and other law enforcement.

The U.S. strategy is primarily interested in keeping immigrants out — with an emphasis on heavy militarization of the border, expansion of detention facilities, and use of aggressive police tactics like raids and routine ICE detainers. To complicate the situation further, the U.S. has given greater power to local law enforcement, pushing for collaboration between local police and immigration enforcement. This creates an environment where immigrants are vulnerable to abuse by any law enforcement agent and in which they have little-to-no recourse for justice.

Organizations like INCITE, the American Civil Liberties Union, Americans for Immigrant Justice, the National Immigrant Justice Center, and others have called for investigation and transparency around the abuse of immigrant detainees.

Queer and transgender immigrants crossing in the U.S. also face high levels of abuse and violence, both while crossing the border and by immigration enforcement. According to the Williams Institute at UCLA, there are approximately 267,000 LGBT adult undocumented immigrants living in the United States, an estimated 20,000 of whom are transgender. In order to change the unchecked abuse that immigrants face when entering the U.S., we must address the broken U.S. immigration policy as well as improve direct support for victims of sexual assault.