What is a lavender menace? Queer History Lesson! 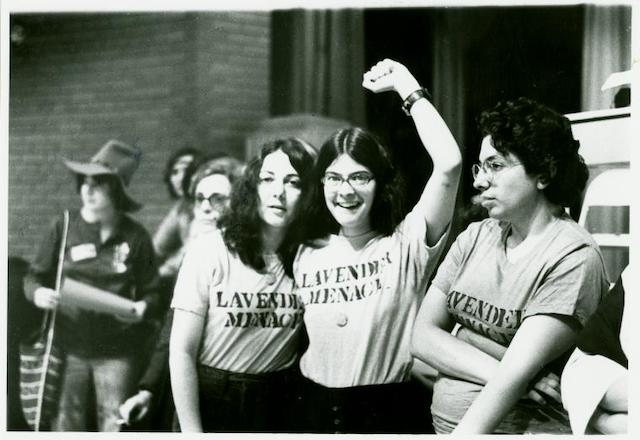 Three members of Lavender Menace at the Second Congress to Unite Women, New York, 1970 May (May 1970), photo by Diana Davies via NYPL

Quite literally, it’s a throwback to the OG lavender menace t-shirt worn by radical lesbian feminists who wore the shirts during a “zap” (direct action, intentionally disruptive protest) to call out the National Organization for Women’s marginalization of lesbian women. Betty Friedan, the first president of NOW, infamously called lesbians in their ranks a “lesbian menace,” a summation of her fear that lesbians would ruin their (white, straight, middle and upper class) movement with their man-hating radicalism and lefty ideas. 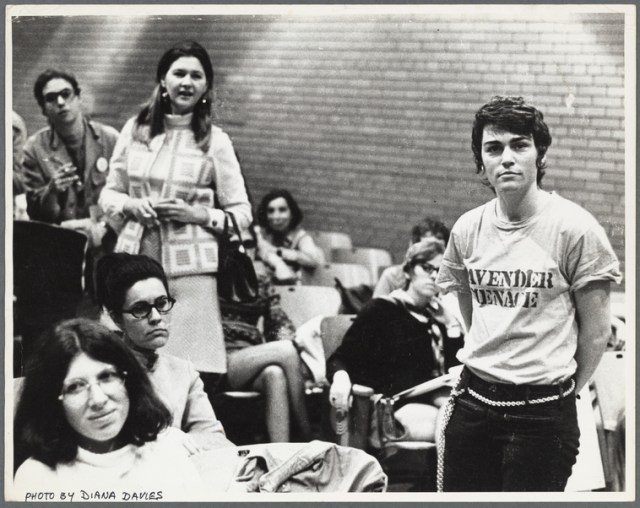 Rita Mae Brown, a lesbian activist, was working for NOW when Friedan made that comment. It was the last straw for Brown. She left her job and began organizing. She recruited lesbian women who were marginalized in both the gay rights movement and the feminist movement to articulate their own platform for lesbian rights. Brown went down in queer history for leading the “lavender menace zap,” a group of activists who physically disrupted and took over the 1970 Second Congress to Unite Women in NYC, to directly confront NOW and the women’s movement. They printed “lavender menace” t-shirt to wear and give out, and bathtub hand-dyed them (as lesbians do) a pale shade of purple.

On the first day of the Second Congress to Unite Women, participants in the zap wore their shirts underneath their regular clothes. They had cased the building before the zap, so when the first speaker of the congress was about to speak to the 300-some audience members, they abruptly cut the lights and microphone. The “lavender menace” rushed into the aisles with posters that read “Women’s Liberation Is A Lesbian Plot” and chanting “Who wants to join us?!”, inviting the gathered audience to join them. They had a plant in the audience who stood up and theatrically took off her shirt to reveal a lavender menace shirt beneath while shouting that she was done being in the closet because of the women’s movement. They took the stage to demand that the women’s movement include lesbian women. The next year, in 1971, NOW passed a resolution recognizing lesbian rights as “legitimate concern for feminism.” They got an apology from Freidan in 1977 and many years later, lesbian rights is one of the official NOW platforms.

The Lavender Menace zap went down in history as a turning point in lesbian activism and in the split between liberal feminism and radical feminism. The lavender menace zap itself directly inspired more lesbian feminist zaps and direct actions and the lesbian separatist movement. However, the lavender menace is not only for lesbians. In fact, Rita Mae Brown herself has said that she believes people are “all degrees of bisexual” and that calling herself a lesbian was about making lesbians visible publicly more than a personal sexual orientation.

It’s true that there was rampant biphobia and transphobia and racism in second-wave white radical lesbian feminism; I wanna name that because it’s undeniable. I dedicate this lavender menace gift guide to the spirit of the lesbian feminist movement, not the exact platform. This is for all of us: queer, bisexual, pansexual, asexual, trans, non-binary, defying all labels, and for lesbians. As a queer bi women, I wear my lavender menace tee with pride because it’s about the fearless spirit of the lavender menace zap, the same spirit that is Audre Lorde calling out white supremacy in feminist spaces, Camp Trans demanding inclusion at MichFest, and Sylvia Rivera shouting “I will no longer put up with this shit,” into the mic at the Christopher Street Liberation Day Rally.

Being a lavender menace is about demanding and occupying space as a queer person in the world, about saying F-U to the cisheteronormative patriarchy, about standing up even when you don’t know if you’ll be heard. These gifts are for the rad, free-thinking, take-no-BS activist in your life or the person who’s inspired by them! 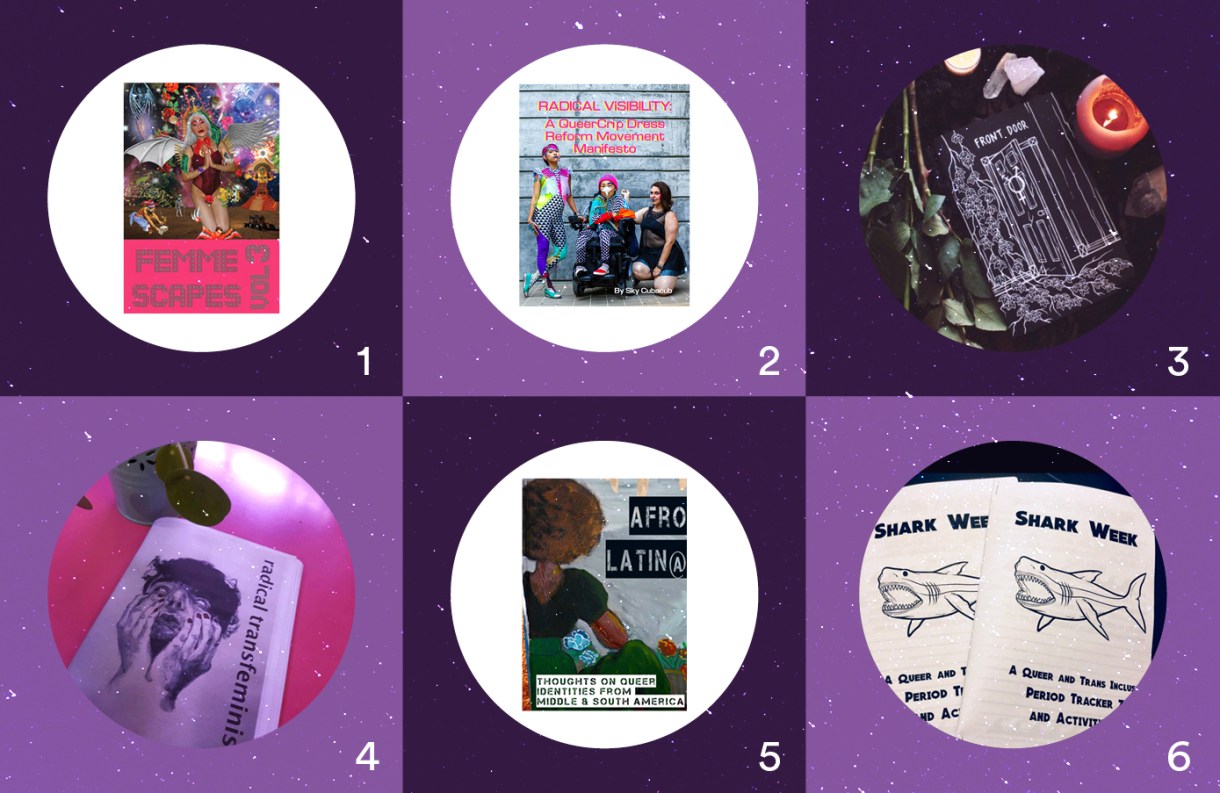 Zines were repopularized by riot grrrls in the 1990’s, influenced by the (male-dominated) DIY punk scene zines of the 1970’s. In 1993, there were over 40,000 known zines being pasted together, copied on xerox machines, and circulated. Bitch and Bust magazines both started as zines. With the rise of the internet and digital publishing, there are a lot more opportunities for writers and artists and creators to get their work into the world today, but there’s still something beautiful and energizing about picking up a zine hand-crafted by someone else. You can’t recreate the feeling of holding something in your hands that someone else held in their hands and copied and stapled together just for you. 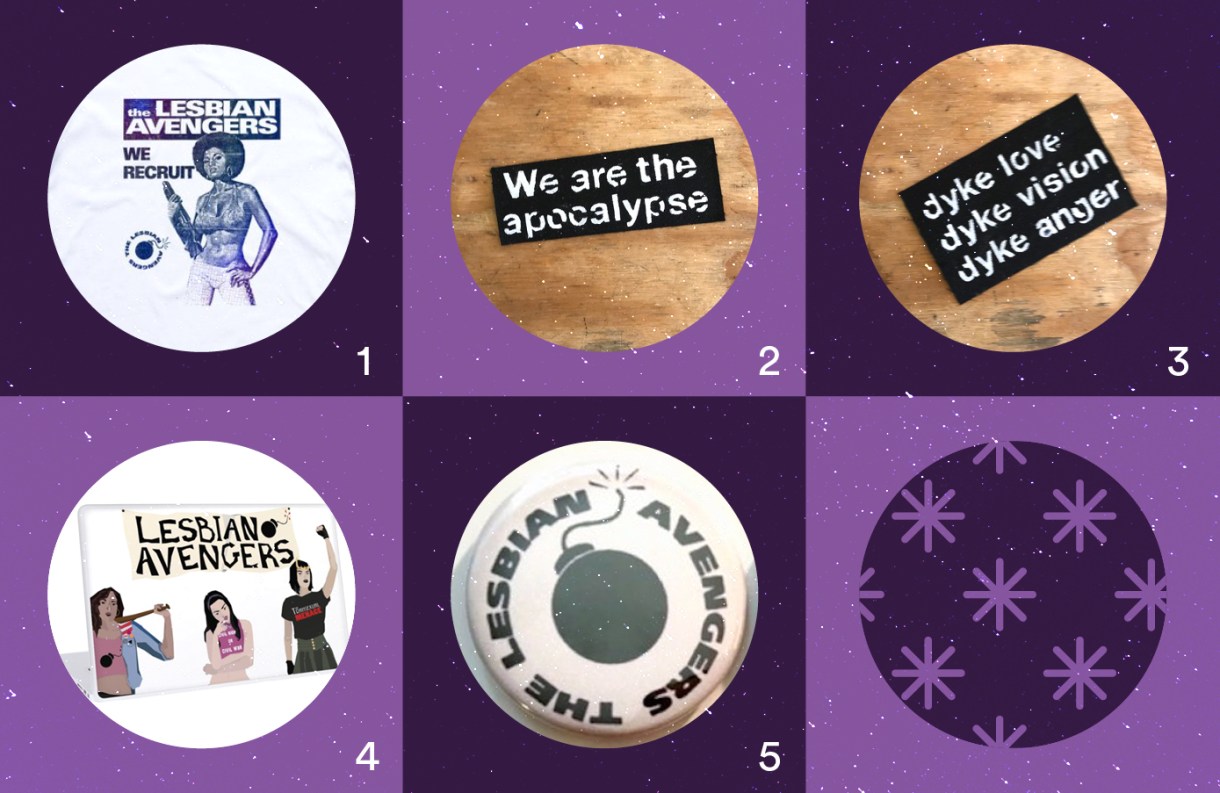 The Lesbian Avengers is a group founded in 1992 to as a direct action group that used media-savvy tactics and grassroots organizing to create actions focused on lesbian visibility. They famously organized the first Dyke March on the eve of the 1993 Lesbian and Gay March on Washington, bringing 20,000 lesbians together to literally eat fire in front of the White House. 1992 as a direct action group focused on issues vital to lesbian survival and visibility. The Lesbian Avengers still have active members and events and Dyke Marches still happen all over the world on the day before Pride marches.

This tee features a graphic from a Lesbian Avenger poster proclaiming proudly, “We Recruit!” and is just the thing to wear to your next queer lib direct action organizing meeting. This remade vintage pin and these patches by a queer DIY maker are quotes from the Lesbian Avengers’ Dyke Manifesto are just what your backpack or jacket needs to scream “Dyke Power!” to anyone who lays eyes upon you. This laptop cover features America Chavez, Kate Bishop, and Loki as members of the Lesbian Avengers because yes, this is actually perfect thanks.

We’ll be your dream and their nightmare! – Dyke Manifesto

Put a Pin In It 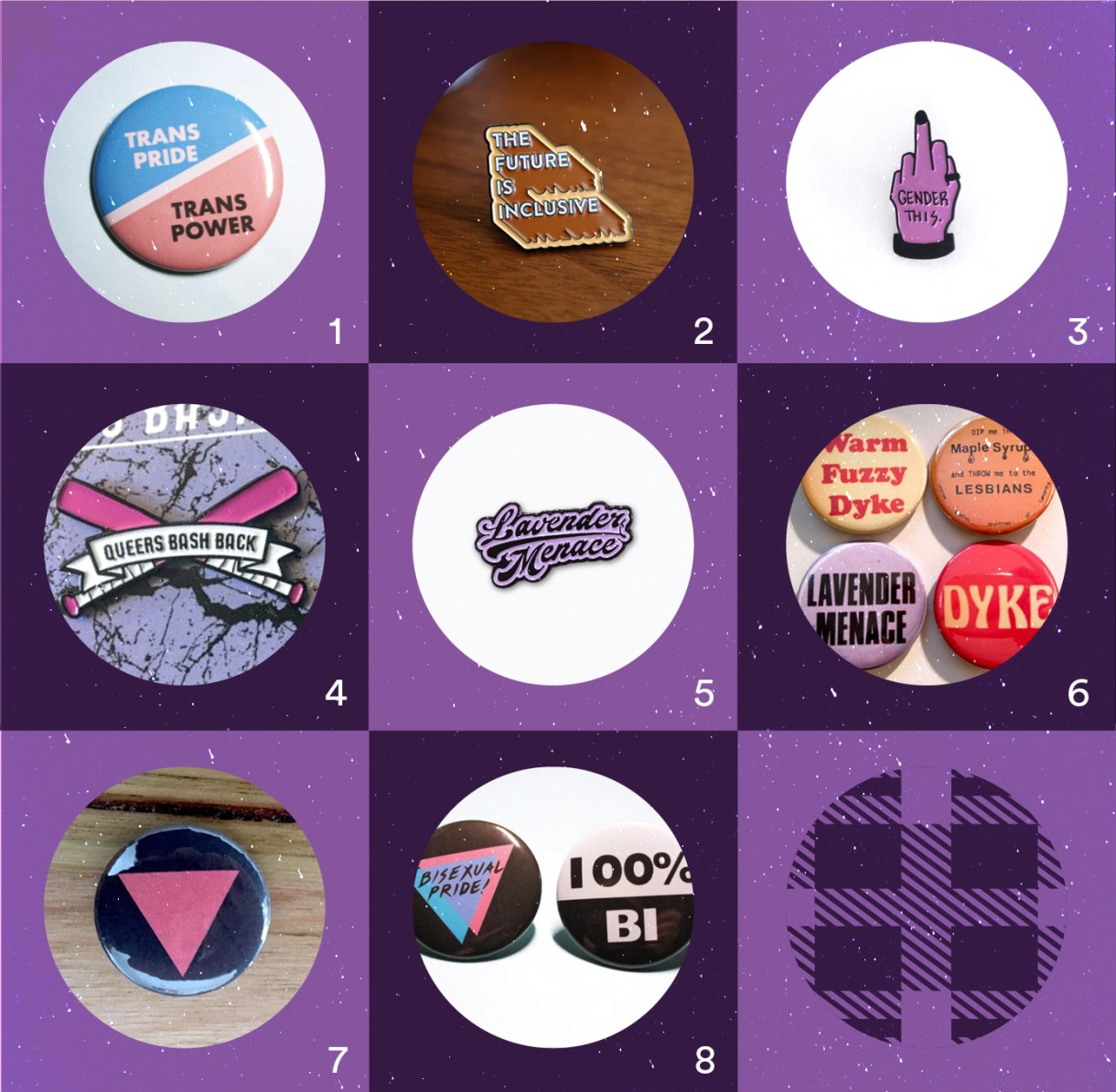 Pins, my favorite activism historical artifact, my favorite DIY outreach merch. A friend of extroverts and introverts, both. A tiny glossy canvas for your public declarations. I can’t get enough pins. I made this huge 4″ pale pink “Cunt Lover” pin with a button-maker in college that I wore all the time on the lapel of my fuzzy winter jacket. I wore it so much that I forgot it was there until someone remarked on it or a Wal*Mart cashier unexpectedly blushed while checking me out.

These activist-y pins are a selection of sexy enamel pins, true classic DIY buttons, and other random pins I think would really be perfect for your jean jacket or backpack or thrifted army surplus bag. 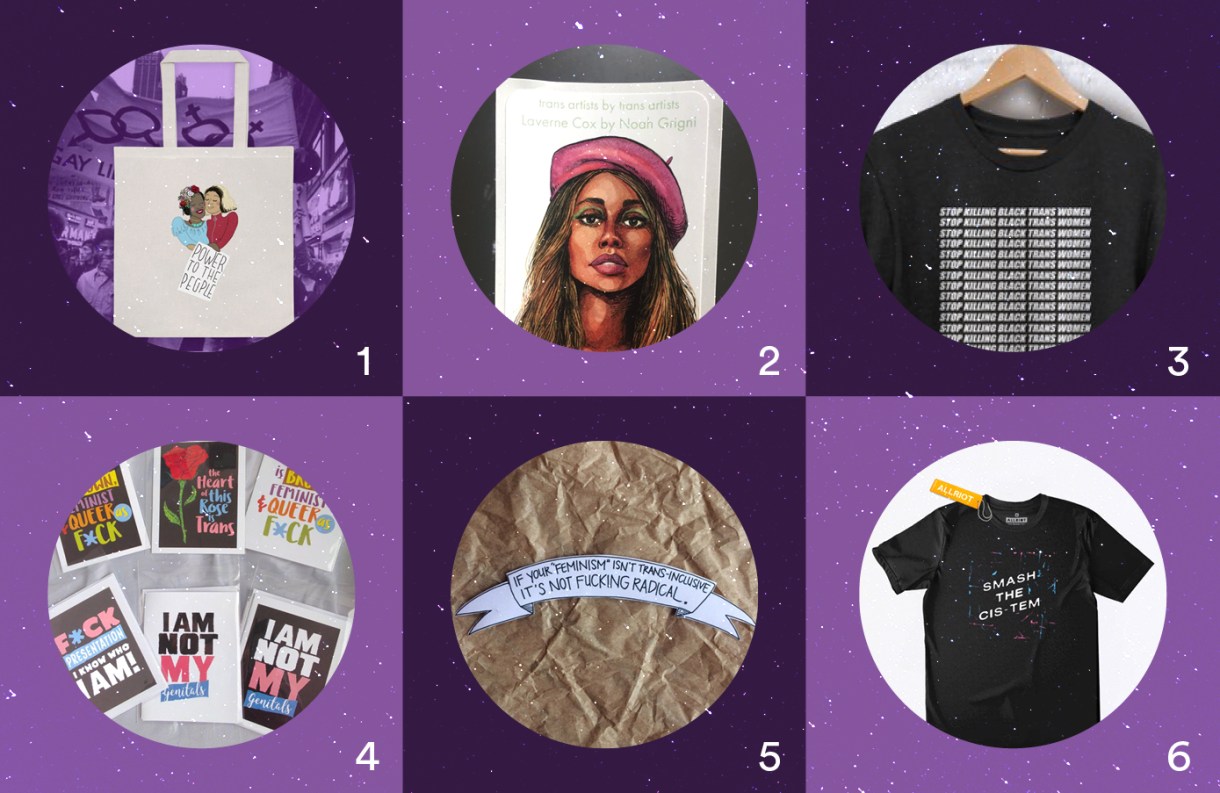 Trans revolutionaries and gender rebels have been on the front lines of gay rights and gay culture from the very beginning. Take Lucy Hicks Anderson, the first LGBT person to defend her marriage in court, or revolutionary leaders like Sylvia Rivera and Marsha P. Johnson who fought and organized from the first night of the Stonewall Riots to their last living days. Here are some perfect gifts for transgender radicals and gender revolutionaries! 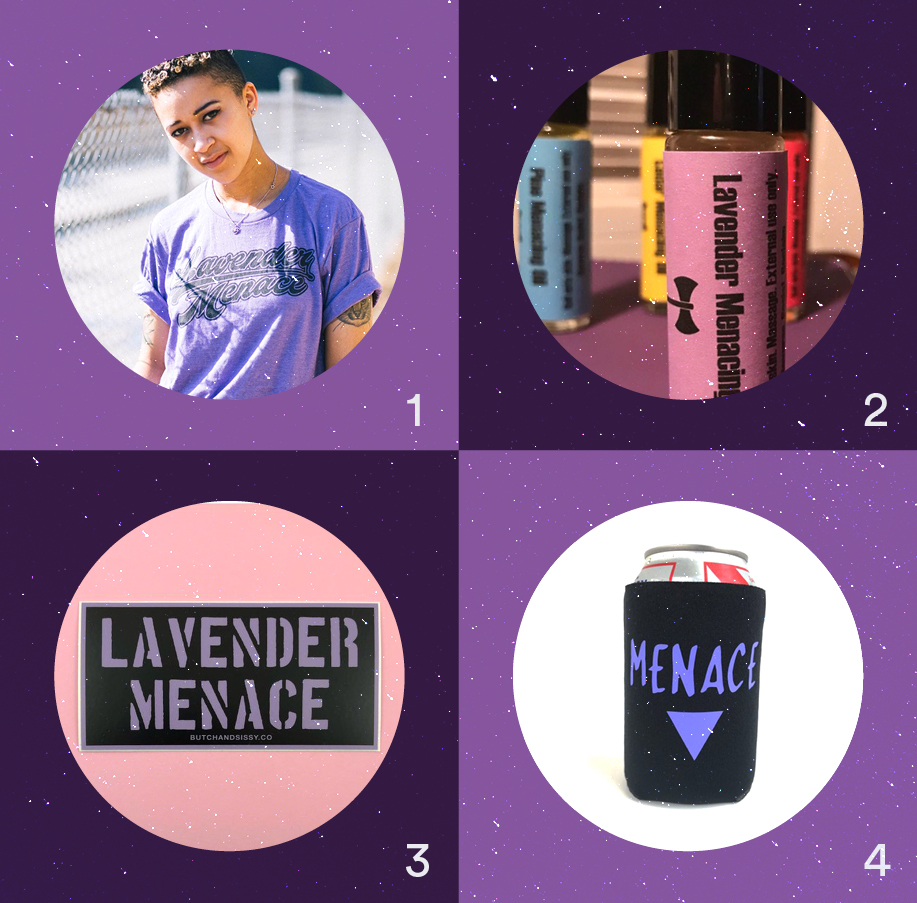 Surround yourself with the magic of badassery and regale anyone who asks about your apparel/style with a herstory lesson on the Lavender Menace Zap of 1970. This lavender and jojoba oil will give you a boost when you’re out sporting your new embroidered patch and sipping from your well-insulated cold beverage of choice. Your signature Autostraddle tee, available in fitted and unisex styles, is the perfect way to signal that you’re down to f*ck shit up!

Who wants to join us?!