Any moment I get to see someone who resembles me on my television or computer screen fills me with excitement. In 2017, it’s still pretty hard to find varied portrayals of Black people on TV, let alone queer Black people who are dating other queer Black people. And honestly, I’m a skeptic. Producing a show is really expensive, and getting people to monetarily support a show that’s about Black queer people means that sometimes, in order to give a community what they need, it’s gonna be done quickly and poorly because there just isn’t enough money to go around.

So when Mey mentioned that there was a new mini-movie on Black&Sexy.TV about a group of queer women of color, I was excited to watch it, but honestly didn’t have really high expectations for it. Thankfully, I was so wrong. 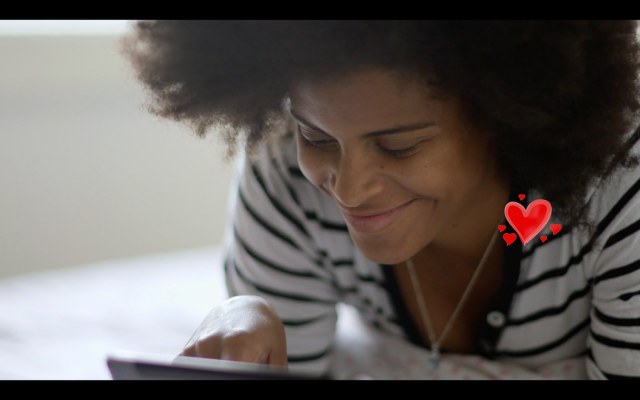 Everyone who can afford it should head over to Black&Sexy.TV as soon as they’ve read this and do themselves a favor and buy Hello Cupid: Farrah. Without giving too much away, the story centers on Farrah, an adorably awkward skater girl who’s just come out and is exploring what it’s like to be a queer person of color in her hood. She’s sweet and nervous and silly and can sing (swoon) and has so much to learn. She reminded me of myself in a way-too-polite and not-really-sure-how-to-flirt kind of way. But it worked for Farrah in ways that it hasn’t quite yet worked for me yet.

She starts the movie at a Hello Cupid mixer for QPOC — which, first of all, I want to live in a world where dating sites host mixers for QPOC!! — where she immediately meets a pan dude who she thinks is cute who has dated this beautiful, kind of aggressive dark skinned femme named Cassie who she also thinks is cute. Farrah goes home with Cassie and her cool group of friends because, to quote Cassie, Farrah “didn’t come to a queer mixer to meet guys, anyway,” and they have a wild night/morning. Highlights I can give you without spoiling too much: there’s a unicorn strap-on situation, OJ and vodka, and an adorable song accompanied by ukulele.

Not only is the storyline sweet and captivating, the movie is also just shot beautifully. There are some gorgeous night scenes of Los Angeles when Farrah is skateboarding to the mixer. At just the right moment, we’ll get a closeup of Farrah’s face or Cassie’s fingers. There’s this really perfect moment when we get a sterile square shot of the two of them, which is spot on for accentuating just how awkward the moment became over what seemed like seconds.

Folks, we do not get good black queer television too often. So run, run, run over and get this while you can. It’s only $3! It also seems as though if you’re really into Farrah and her adventures that she’ll be showing up on one of Black&Sexy’s series, “Sexless.” Season 3 just premiered, which means you can Farrah’s adventures with coming out and figuring out sex with ladies. I’m doing it and so should you. Support artists of color, especially artists of color making amazing work!! Black&Sexy isn’t a specifically queer channel, so give them more reason to give us more queer programming!!