Last August, Carmen reported on the extra healthcare costs that women pay — costs for things like birth control, pregnancies, pap smears and mammograms — to stay healthy. As it turns out, many women are being hit twice with higher costs thanks to a healthcare system that, in the words of Senator Barbara Mikulski, treats “being a woman… as a preexisting condition.”

The news comes from a study done by the the National Women’s Law Center and shows that, in addition to all those co-pays, women pay more than men for the exact same health insurance coverage. The disparity in cost exists thanks to a system called “gender rating.” You’re probably familiar with it because it’s the same practice used by car insurance companies to charge men and people under 18 higher premiums. The problem is that driving is an optional activity with measurable outcomes; simply living is not.

Gender rating happens most frequently in the individual market–companies that sell insurance to individuals who don’t receive it through their employers or are ineligible for government programs like Medicaid. In the states that have not banned gender rating, 92 percent of the best-selling plans charge higher prices for women than men. Although it’s less common, the practice still occurs in the group market; businesses with a female-heavy staff are often charged a higher rate for coverage. The researchers estimate that collectively, women are paying $1 billion dollars more than men as a result of the practice.

Although it’s hard to pinpoint why, exactly, gender rating occurs, it’s clear that pregnancy has nothing to do with it. The NWLC study excluded maternity coverage in their calculations and still found that a third of all companies charge 30-year-old women at least 30% than men. It wasn’t hard to eliminate those costs; only 6% of insurers even offer maternity coverage in states where it’s not mandated (that number rises to a whopping 12% when the 9 states where it’s required are factored in). According to the New York Times, companies claim the practice stems from a difference in the way men and women use health services.

“Insurers said they charged women more than men because claims showed that women ages 19 to 55 tended to use more health care services. They are more likely to visit doctors, to get regular checkups, to take prescription drugs and to have certain chronic illnesses.”

This is a really special opinion for a few reasons. First, that theory punishes women for being proactive and responsible about their mental and physical health and rewards men for being less so. It also ignores all the macro-level factors which contribute to women’s health problems, such as second shifting. Furthermore, a justification based on group behavior should mean that the difference in cost is the same across the board. Not the case, says the NWLC: “One plan examined in Arkansas charges 25-year-old women 81% more than men for coverage while a similar plan in the same state only charges women 10% more for coverage than men.”

With the economy still moving along sluggishly, gender rating stands to affect young people, especially those in the creative class who lack employer-sponsored insurance. It’s even uglier from a queer perspective; without laws that require benefits to cover domestic partners, women who would be covered if they were married to men are force to choose between being un- and underinsured or paying rated premiums. 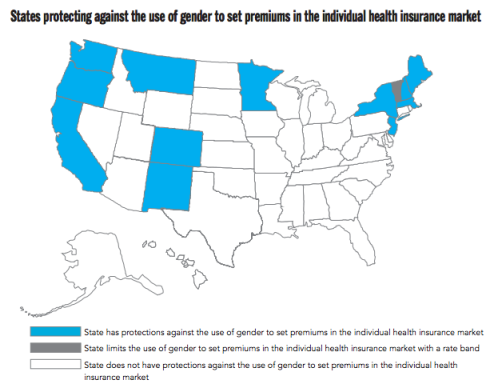 Via: NWLC Turning To Fairness

The one very bright upside to the study is that change is happening. Already, 14 states have banned gender rating in individual insurance pricing and 17 states have prohibited it in the group market. Assuming it goes uncontested (which, to he honest, is making a pretty big assumption), the Affordable Care Act will abolish the practice on a national level in 2014. It looks like we just might have reached a time where women’s health is getting the attention it deserves.