Welcome back to recaps of Gotham, the hit TV show that seeks to answer the question: Does a police force exist that is more corrupt/incompetent than the one in Rosewood, Pennsylvania, where everyone murders everyone because no detective has ever solved a single case in the town’s whole history? Two weeks is two too many weeks without Renee Montoya on TV, but she was back with a literal vengeance on Monday night!

First, I will tell you about the monster of the week. Then, I will explain to you about Indigo Girls’ cover of Dire Straits’ “Romeo and Juliet” and how Renee Montoya wrote a new verse to that song that makes it end like:

“He finds a convenient streetlight, steps out of the shade, and says something like, ‘You and me babe—how ’bout it?’ Juliet says, ‘Hey, it’s Romeo! You nearly gave me a wedding ring, yeah well!’ Now he’s up the river; she’s singing, ‘Hey, la, Orange Is the New Black.'” 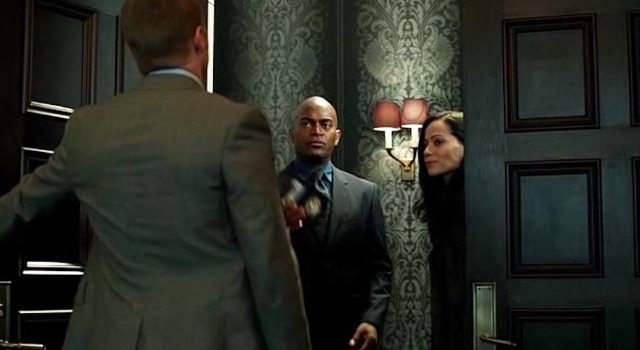 Good luck getting anyone to throw their pie for you, asshole.

So, this week’s monster is a goat because, look, y’all, we can’t just jump right in with the Joker, okay? Things in Gotham City escalated to the Joker. But they began with balloons and goats. Next season maybe we’re ready for vacuum cleaners and hyenas, but right now: goats. It’s a long way until bats so get comfortable.

Back when Harvey Bullock was a young, eager detective who did his job instead of sitting at his desk biting off the hands of anyone who fingered him to work a case, he and his partner solved the mystery of the goat.

Bullock’s partner was named Dix, which sounds like “dicks,” as in “Detective Dicks,” and you’ll mainly recognize him as Cher’s dad from Clueless. Bullock and Dix worked the goat case together. Goat, see, was sacrificing teenage girls, and when Bullock and Dix tracked him to an abandoned warehouse, they killed him dead. Except for one decade later, goat has returned and is sacrificing more girls. 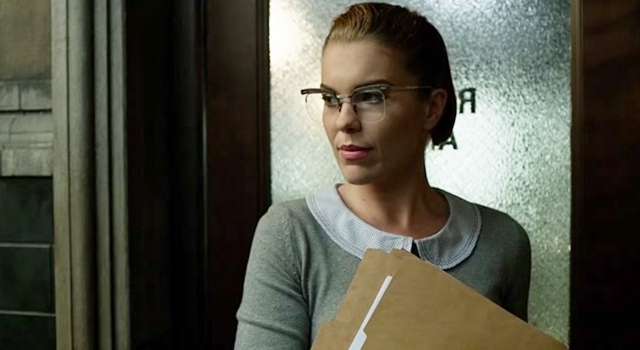 Gordon tags along when Bullock visits Dix in an old folks home where a lot of weird things happen. For example, Dix calls Bullock “a white knight.” Bullock, who I think you’ll remember has chosen eating sandwiches over stopping criminals at least three times so far this season. Also, for example, Bullock is actually paying for Dix’s stay in the old folks’ home and even making sure he has his favorite magazines to keep him company. Bullock is a marshmallow.

Bullock and Gordon dance around town interviewing the people whose kids were killed by the goat, but they don’t make any headway until Bullock remembers that all the goats he knows have these hand tremors when they get agitated. So he makes a trip to see the therapist of the most recent guy he spotted with a hand tremor and she confesses she’s been hypnotizing old white guys for forever to carry out the will of the Svengali Goat, which basically is just murdering the children of one percenters because trust fund babies are ruining the town. So Bullock shoots her in her ankle and takes her ass to jail. 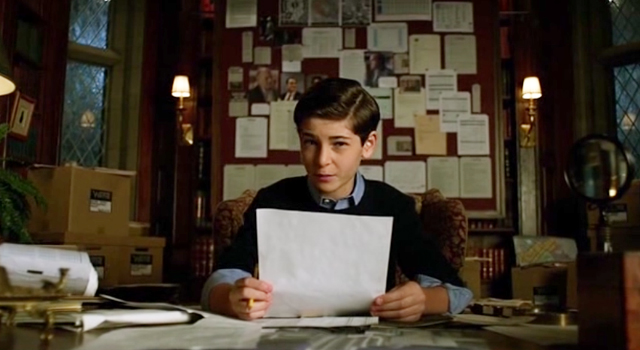 Alfred, do you know Photoshop? Riese needs a new intern and I want to apply so bad.

Speaking of trust fund babies, Bruce Wayne has crafted a vision board that he keeps in his study, where he eats and sleeps and gets walloped by Alfred and listens to the news of all these vigilantes running around with their weak aliases. Alfred would like for them to go on vacation or at least take a long weekend to the lake house or something, but young Master Bruce would much prefer to continue his spiral down the rabbit hole of crime-fighting obsession. Catgirl gets a peek at his murder board when she breaks in to make sure he’s tucked in or whatever. She seems kind of impressed. 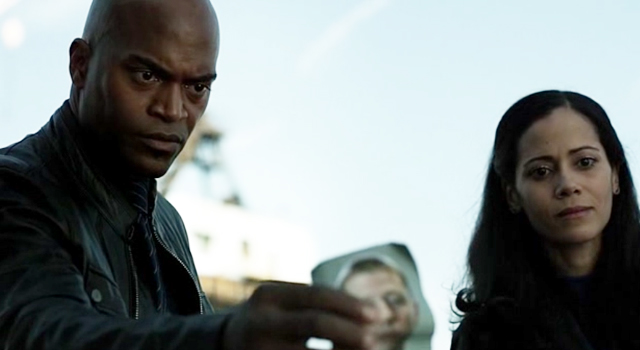 Have you seen this boring-ass face anywhere? It’s okay if you can’t remember. He’s so plain it’s amazing anyone would sleep with him. Er, remember him.

Okay, but while all of this is going on, Renee Montoya is dragging Crispus Allen all around town shoving a photo of Jim Gordon in the face of anyone with eyeballs to see if they’ll dime him out for the murder of Oswald Cobblepot. They finally get a drunk, homeless guy who lives on the docks to say Gordon shot Oswald in the face, and that’s good enough for any old Gotham City judge! The look of triumph on Montoya’s face, man.

Someone on Twitter called her a jealous bitch on Monday night and I almost came unglued, because for one thing, have you ever had a girl leave you for a dude? And then have you heard from reliable sources that that dude is a dirty cop in a city full of dirty cops, the thing that offends your value system more than all other things because serving and protecting is your whole identity? No, you have not (probably), so leave Montoya alone! 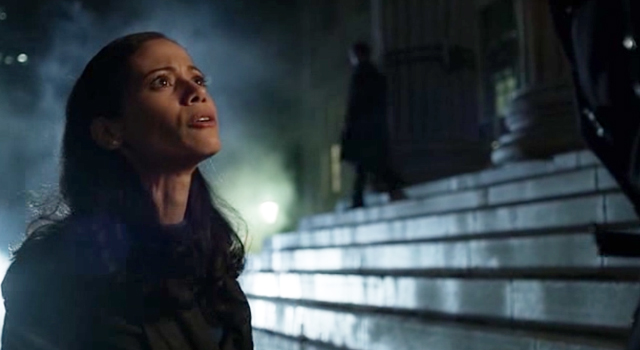 My name’s Renee Montoya and I want to smoke some marijuana. 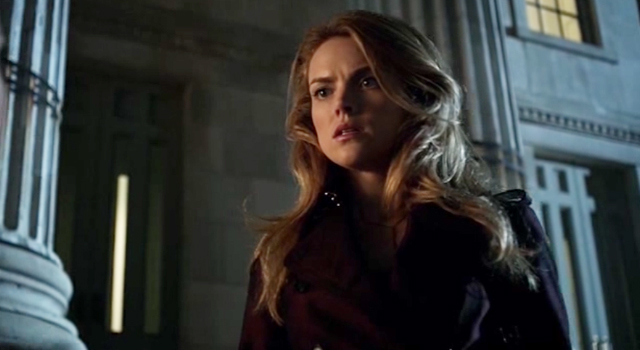 Barbara, who has gotten such a taste for fresh air that she leaves her house at least once a month these days, tracks down Montoya on the stairs of the courthouse and they have a very intense discussion.

Montoya: Did you get evicted or something? I’ve never seen you outside this much in all our lives.
Barbara: I just thought I’d wander around in the nighttime, maybe save Jim’s career, maybe get massacred by a goat.
Montoya: If you didn’t spend every second we’re together staring at my lips and scrunching up your eyebrows like you’re remembering me naked, I would not tell you this, but we got a warrant to arrest Gordon.
Barbara: What? Why?!
Montoya: He’s too boring to be allowed in this city. Just kidding, the warrant is for murder.
Barbara: Oh, if only he would tell me what is going on in his life! I wait at home all day for him to come in and tell me about his life!
Montoya: That is both pathetic and dangerous. Check yourself, Babs. And call me!

Barbara, of course, runs right home and packs up her shit and tries to get Jim to leave town with her. She’s heard Metropolis is nice this time of year. But before they can work that out, Montoya and Allen show up at the door, Renee grinning like a chipmunk eating circus peanuts. Jim makes one of the three faces he makes, the one that means “I’m disappointed,” I think and goes with them to the GCPD HQ. 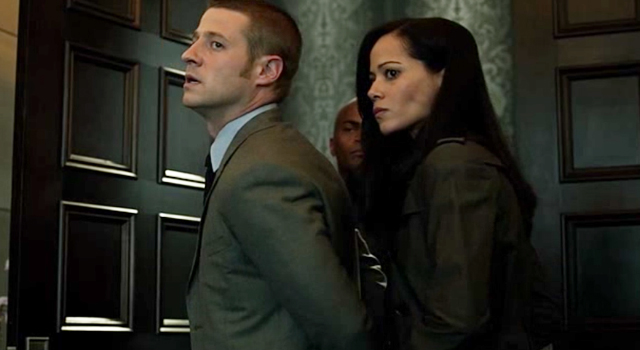 Bullock hilariously tries to defend him, so Montoya and Allen arrest his ass too. It’s all: 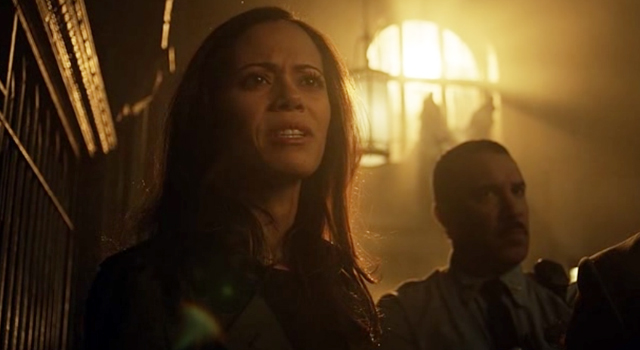 You’re under arrest for the murder of 100 tuna sandwiches.

Their insane person shouting is interrupted by a person in the doorway wearing a tuxedo. It is Oswald Cobblepot, fresh from spending the day getting bathed by his mother and ready to announce his alive-ness to the world. Everybody pisses their pants a little bit because him not being dead means a lot of lies are about to come unraveled.

Next week: Fish continues to build her lesbian army in the wake of Penguin’s resurrection!