Some things change, but most things stay the same. In many ways, watching the seemingly endless and constant GOP debates is very repetitive. Ben Carson is still pushing for a flat tax! Mike Huckabee is still super into personhood legislation! I keep forgetting John Kasich is still in the race! A lot of what happens during these debates feels a bit like a rerun, and isn’t anything you can’t see by checking out the candidates’ Twitter feeds.

What we’re really watching for when we sit down for these things is how the candidates are acting, their dynamics with each other, whether they make any weird faces we can screenshot. So did anything happen in that department last night? Well, Ben Carson was about 30% more awake and engaged than we’ve seen him before. Marco Rubio was very agitated and largely didn’t execute very well, and I like to imagine a boxing-coach-style campaign manager giving him an “I’m not angry, but I’m disappointed” speech afterward. But most interestingly, I think, Trump and Cruz got snippy with each other! 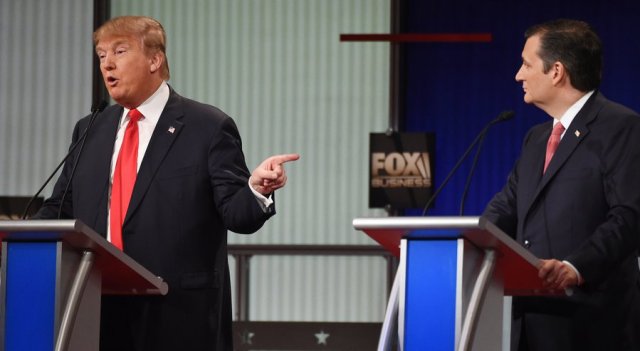 Last debate, Trump and Cruz seemed to be getting along surprisingly well, with Trump even saying outright he had a good opinion of Cruz. It sparked theories that they were considering sharing a ticket, a nightmare scenario for many of us. This time, however, it became clear that if that were ever true, both men had been imagining themselves as the lead candidate on that ticket, and the closing gap between them in the polls has both of them spooked. After a little tiff where Cruz said that Trump was foolishly accusing him of not being a real citizen, and Trump tried to argue that not only is Cruz not really a citizen, but that Democrats are going to sue Cruz over it (???), they had this exchange:

CRUZ: The chances of any litigation proceeding and succeeding on this are zero. And Mr. Trump is very focused…
TRUMP: He’s wrong. He’s wrong.
CRUZ: … on Larry Tribe. Let me tell you who Larry Tribe is. He’s a left-wing judicial activist, Harvard Law professor who was Al Gore’s lawyer in Bush versus Gore. He’s a major Hillary Clinton supporter. And there’s a reason why Hillary’s supporters are echoing Donald’s attacks on me, because Hillary…
TRUMP: He is not the only one.
CRUZ: … wants to face Donald Trump in the general election.
TRUMP: There are many lawyers.
CRUZ: And I’ll tell you what, Donald, you — you very kindly just a moment ago offered me the V.P. slot.
(LAUGHTER) I’ll tell you what. If this all works out, I’m happy to consider naming you as V.P. So if you happen to be right, you could get the top job at the end of the day.
TRUMP: No — no…

Wow! Sick burns abound! Combined with the occasional booing when Trump spoke (although it’s always hard for me to read those! Are they boos of his ideas or boos because they are commiserating that the thing he is talking about is bad?) it seems like Cruz hit that out of the park. Right?

I mean, that would be neat, in that many of us would be happy to see Trump no longer in the lead (although it’s not like Cruz is, you know, a great alternative). I keep thinking to something Heather noted about the 2012 race; the context was talking about Fox News’ spins on past events, but it does show something about what happens when the field is flooded with candidates, like the GOP race is right now.

After the 2012 presidential election, Fox News blamed President Obama’s campaign for many of the public perceptions about Mitt Romney that led to his defeat. However, it was Republican candidates who crafted those messages during the primary campaign season. Fox told its viewers President Obama was responsible for Americans believing the narrative that Romney “was a vulture, that he was a vampire,” a “Vulture Capitalist.” In fact, it was Rick Perry who coined the phrase and Newt Gingrich who continued to promote it. Sheldon Adelson, the billionaire who ultimately became one of Romney’s chief financial supporters, is the one who financed Gingrich’s now-infamous “King of Bain” attack documentary.

The current GOP candidates — even after several people have dropped out of the race, there were still seven people! in the top-tier debate! — have to do a lot of work to distinguish themselves from each other, and it’s possible that their accusations against each other will outlive the GOP nomination and continue to tarnish candidate’s reputations during the real race. If that works out to be the case, then a Trump/Cruz feud would be great news.

However, if there’s one thing we’ve heard over and over, it’s that we’ve never seen anything quite like Trump before. While I don’t claim to really be able to get into the head of his supporters — this guy chose to double down on shutting all Muslims out of the country! — I do wonder whether attacks against him might dovetail with Trumps “telling it like it is” brand in a way that immunizes him against criticism. If you’ve ever interacted with an asshole like Trump in real life, someone who believes in the correctness of their own opinions to a fantastical degree, you know that sometimes people’s criticism only strengthens their own self-importance — they’re heartened by having hitting a nerve. Trump’s supporters are already drawn to his “outsider” status, to his identity as a “maverick” — if the other frontrunner in his own party attacks him, will their faith in that identity be strengthened?

As of this writing, Trump is still inched ahead of Cruz in the polls, if only by a couple points. Last night, the moderator asked Trump why this squabble was happening:

He’s not wrong! They do both have a chance! We’ll have to wait and see what comes of that. Luckily, we only have to wait a mere two weeks to see this all again, because there is yet ANOTHER Republican debate on the horizon. THANK GOODNESS.