Not content with cornering the email, search, map, video, and browser markets, Google is making its way into the newest in experimental technology — gaydar. Thanks to a new, unannounced feature, searching a celebrity’s name with the words “gay” “bisexual” or “lesbian” returns a pretty good guess at their sexuality.

Like similar “best guesses” on celebrity height and product releases, Google’s gaydar uses algorithms that reference articles and interviews. The feature isn’t universal; only a select few individuals pop up for the time being. While I’d love to get my hands on the full list and know what exactly qualifies someone for inclusion, I’m probably more likely to marry Shakira. So in lieu of anything official, I’ve created a small sampling of people who may be relevant to your interests. Feel free to add to the list. 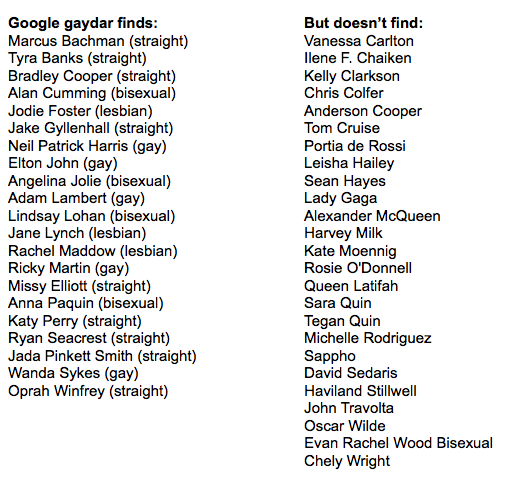 Searching celebrity names might be a fun way to spend the afternoon, but what’s the point? It’s hard to figure out what exactly Google’s angle is. Doing similar searches with the word “homosexual” doesn’t trigger the feature, suggesting that Google’s heard the news that word choice matters and that “homosexual” tends to be bogged down with more negative connotations and used by anti-gay bigots than more favorable terms like “gay” and “lesbian.” Could this part of Google’s effort to to make being queer as normal as memorizing the digits of pi?

If so, why doesn’t searching a name with the word “straight” return any results? If the goal is to remove the otherness from being gay, then shouldn’t its (more accepted) opposite be subjected to the same algorithm?

Speaking of questions, Google’s Android market has a new version of 20 Questions for you to try out: “Is my son gay?” Developed as a translation of its French version “Mon fils il-est gay?,” the app  has users answer questions about their son and gives you a dubious prognosis based on how stereotypically masculine or feminine his behavior is.

According to the International Business Times, questions include:

+ Does your son dress up nicely?

+ Does he pay close attention to his outfits and brand names

+ Does he read the sports page in the newspaper?

+ Is he a fan of divas (Madonna, Britney Spears)?

+ Does he spend a long time in the bathroom?

To which I say: rubbish! How do you know your son is powdering his nose and not playing football with a roll of toilet paper? Finn does both and enjoys musical comedies and he likes girls so much that he’s a lesbian! 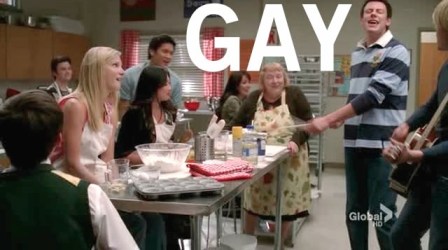 but the other kind

The app’s polarizing reviews either praise the creators for their sense of humor and call the app harmless (I’ll start buying this when gay-bashing stops, kids stop killing themselves, and marriage equality is legalized) or call it out for being dangerous and stereotypical. I like self-effacing humor as much as the next person, but there’s just not a whole lot to laugh at here. Between the played-out jokes and the fact that the app’s being marketed toward parents who are concerned about their sons, it’s doing nothing more than promote homophobia. As a side note, reviewer Sean gets a comment award for pointing out that you can save time and money by not being a complete idiot: “There are better more important questions to ask, to find out, like ‘SON ARE YOU GAY’?”

Until Google knows that Portia de Rossi is just as gay as her wife and there’s an app that can definitively tell me if my barista wants to make out, technology can keep its nebby little nose out of my gay business.