Good Trouble finished its second season with one of my favorite episodes to date. Not only did the episode immerse us in the ethereal experience known as Trap Heals, it gave us story development on so many fronts.

Alice continued her evolution, from the meek Coterie manager we saw in the pilot to the confident comedian willing to challenge her mentor for a spot in the CBTV diversity program. Malika cemented her support structure — getting her boyfriend, Isaac, treatment for his anxiety, healing the rift between her father and brother, inviting her fellow Coterie residents into her world — before she goes to court. After silently pining after each other for months (and compelling me to care) Dennis and Davia finally confessed their love for one another. The Adams Fosters sisters finally reunited, after both having lobbed grenades into their personal relationships: Callie stealing Jamie’s privileged work product and Mariana cheating on Raj with Evan (after believing Raj cheated on her with her roommate, Isabella).

“That’s a wrap on season two of Good Trouble! The show returns this summer for its third season and, after ‘Trap Heals,’ I can honestly say I can’t wait,” I wrote in my recap, clearly not realizing that I was “[tempting] the wrath of the whatever from high atop the thing.” 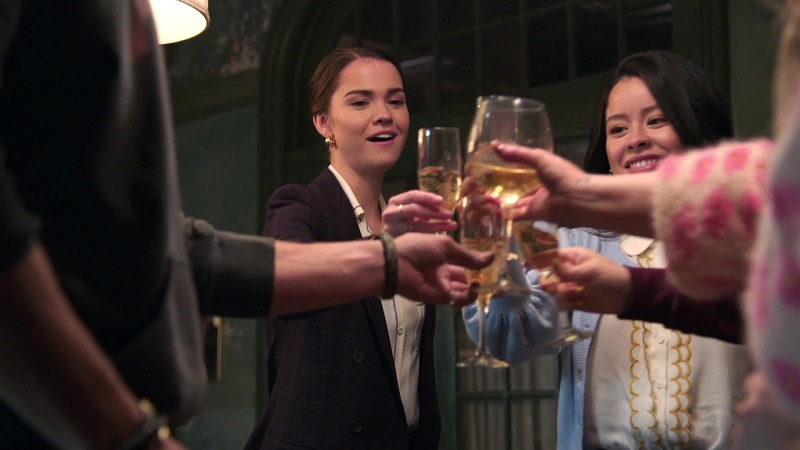 Just a week after the Good Trouble finale aired, an NBA player named Rudy Gobert would test positive for COVID-19. While the virus had already made it to American shores, Gobert’s positive test brought it to the forefront of the American consciousness. The NBA shutdown its season soon thereafter and everything else fell like dominoes behind it. Sufficed to say, I didn’t get those summer episodes of Good Trouble.

We all changed that day and even more in the 344 days since. Everything we do, everything we’ve always taken for granted, comes with risk now. Our grief is palpable, our mourning omnipresent. And while we all hope that the vaccine is the light at the end of the tunnel and that things might one day get back to normal, we all secretly worry that there is no going back… this is our new normal.

Good Trouble‘s third season finally premiered last night, months after it was promised and nearly a year since “Trap Heals” aired. It does not exist in our new normal. There are no masks, no social distancing, no mention of COVID-19 anywhere. In a preview of the new season with TV Line, the show’s executive producer, Joanna Johnson, said, “I just also think that people don’t want to turn on the TV and see everyone in masks. I feel like people want to escape a little, and I really appreciate television [shows set in] a mask-free world, where people are out. It relieves my anxiety when I see that on TV.”

I understand that desire. I get wanting to have a break from this reality and immersing yourself in an alternate universe for a while. Of course, I want to watch television that reminds me of what it was like to sit beside my co-workers or to hang out with my friends at a bar or to share a hug or kiss with someone new. I get wanting to have some reminders of what normal once was and what we hope it looks like again soon. But as I watched Good Trouble‘s season premiere — much to my surprise — I found myself feeling like the show had missed an opportunity. 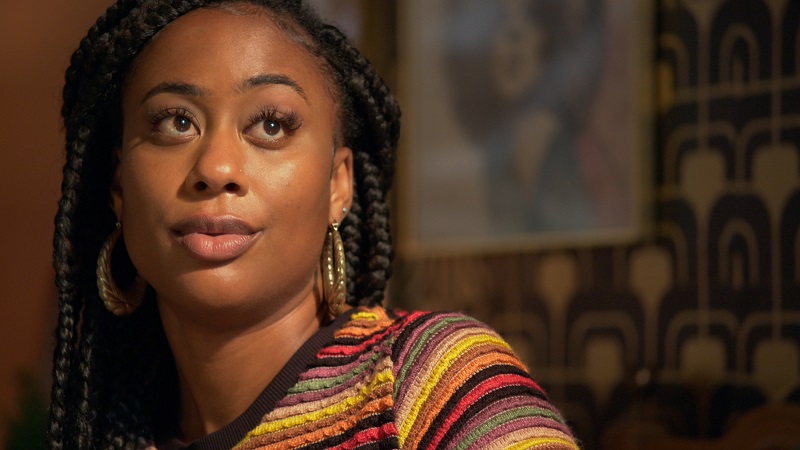 Good Trouble has never been a show about escapism. It’s never been a show devoted to making people feel more comfortable. When you look at the storylines the show has done — on Black Lives Matter, on sexism and racism in tech, on the school to prison pipeline — the goal hasn’t been to relieve anxieties, it’s been to foreground them so that others could bear witness. To avoid telling the uncomfortable stories now feels contrary to what this show has always been.

What’s more? I’m not sure there is a show on television that was better prepared to tell the story of this moment than Good Trouble. For Malika, the story could have been how the handling of this pandemic has re-emphasized how black and brown lives don’t matter. For Davia, how the solution to educating during a pandemic has harmed our most vulnerable students. For Dennis, how the pandemic has exacerbated the need for mental health resources and, as such, made them harder to access. For Mariana, how even as the rest of the world struggles to make ends meet, tech is booming. For Alice (and Sumi), how the pandemic has led to a spike in Anti-Asian hate crimes. For Callie — if she’d kept her old job — a story about the looming “homeless pandemic” or — if she persisted in pursuing criminal defense — how the pandemic has led to a suspension of defendants’ constitutional rights or how states have allowed COVID to run rampant in prisons. And all that’s before you dig into the personal impact of the pandemic… lost jobs, illness and the loss of life…there was so much story potential but instead we’re concerned about anxiety relief. It seems like a missed opportunity to me.

All that said, Good Trouble‘s season’s premiere did find a way to capture some of the heartbreak of the last year by breaking up nearly every couple on the canvas. Callie and Jamie? Done. Mariana and Raj? Over after she decides to give her inappropriate relationship with Evan a shot. Davia and Dennis? On pause before they even really had a chance to get started. Isaac and Malika are still together but given her newfound closeness with her co-worker, I’m worried about their future (the new guy tells Malika, “I already knew I was in big trouble from the day I met you,” with those dimples…. yeah, I know an interloper when I see one).

+ If I didn’t feel so strongly about the COVID avoidance in Good Trouble, this recap would’ve been entirely about how much I’ve grown to dislike Callie. She is actually the worst.

Last season, she stood before a group tenants and encouraged them to turn down relocation vouchers and fight their evictions. She promised to fight for them. But this season, when a shiny new object turns up at the Legal Aid offices — a shiny new object which I adore, mind you, because it’s Constance Zimmer in full Mommi mode — she drops those tenants without a second thought and opts to become a criminal defense attorney. I guess it’s supposed to be endearing that Callie hops from one job to the next — a lot of 20 year olds do — but if the show valued the stories of those tenants as something other than a plot device, they’d realize how awful this makes Callie look.

And then, on top of that, her theft of privileged information from Jamie — which, I guess we’re supposed to see as some moral victory — carries absolutely zero consequences for her even as it ruins her ex-boyfriend’s career. Perhaps she can’t be held criminally liable but, at the very least, she should face questions from the California State Bar about her moral standing. But no, she won’t face any consequences and I absolutely hate it.

+ As someone who audibly groaned when they put Callie back in Gael’s orbit soon after she’d returned to the Coterie, I was pleasantly surprised by the misdirection of Gael’s brunette hook-up being Isabella, not Callie. That said, it felt a little like Chekhov’s gun and I’m anxious to see if has any ramifications.

+ Speaking of Isabella, she’s gone now? I feel a little bad for thinking the worst of her last season. Turns out she wasn’t as bad as I thought.

Next week: Shut it down, but not really because it’s not a pandemic on Good Trouble.

Natalie has written 173 articles for us.