One of my absolute all-time favorite holiday traditions involves traveling to Los Angeles to visit my extended family. There we spend Christmas morning with my mom’s family (which is Mexican) with nine aunts and uncles and double digit cousins. And in the morning, we would wake up to a wonderful breakfast cooked by my mom and grandma and augmented by Marranitos (or Piggies) and Pan Dulce from Guadalajara Bakery in Culver City. In my opinion, if you’ve never eaten homemade tamales and chorizo con huevos y papas along with piles and piles of Mexican baked goods, you’ve never really experienced Christmas.

Now, I know how to bake, but I’m kind of really impatient and these take up a good chunk of time (that’s a warning, both of these recipes take some time and effort), plus I’ve never made these before, so I was actually helping my mom make these. So really, everyone should say thanks to my mom for these recipes. Hey Mom, thanks! 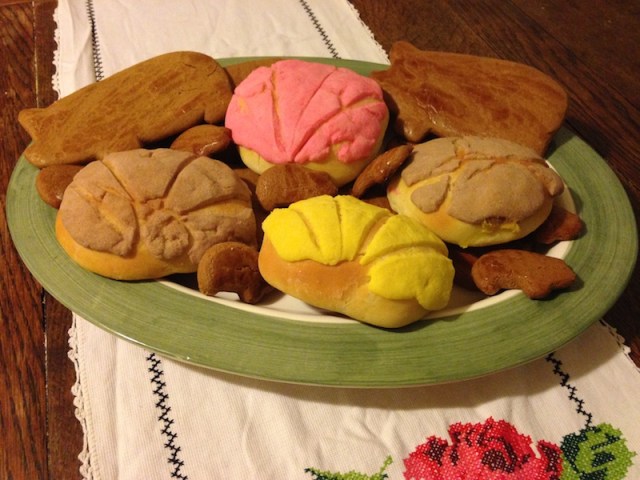 As a kid, I was under the impression that pan dulce was a special treat, one that we could only have on Christmas. I think I thought it was only made around Christmas? And I definitely knew they didn’t sell it in Idaho (although several stores here do now). When I was being my most sugar crazed, I would just eat the tops off of these and then throw away the bread part. Now I enjoy the whole thing.

1. Mix the shortening and sugar on medium to high speed until creamy. Add in eggs, salt, water and yeast and mix on medium speed for 10-20 seconds until blended.

2. Place flour in a large bowl and make a well in the middle. This is where you’ll pour the mixture that you just made in.

3. Pour the mixture into the flour and slowly mix it until a dough forms.

4. Knead the dough on a lightly floured surface for fifteen minutes.

5. Place the dough in a bowl and cover it with a damp towel. Then just set in a warm place and let it rise for an hour. You can use this time to watch an episode of Orange is the New Black. Or a couple episodes of Transparent.

6. After the dough is risen, divide it into twelve portions. I did this with a cleaver, which was pretty fun, but you can do it however you want.

7. Roll each portion into a round shape and place each piece on a lightly greased baking sheet. 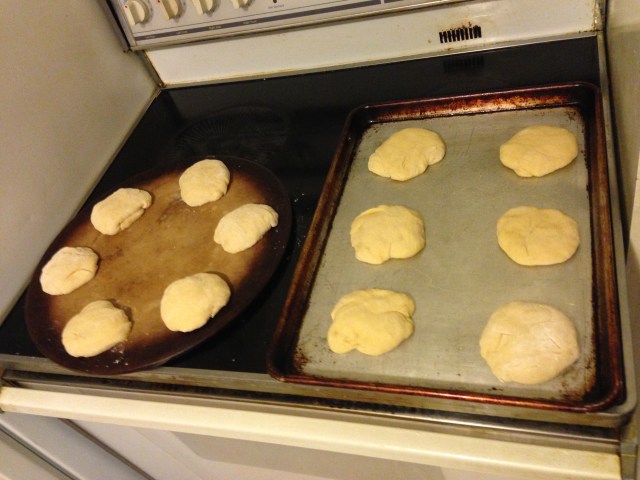 Look at all this unbaked pan dulce! So much potential!

8. Here you have to cover it with a damp cloth and again, let it rise for an hour. Looks like you can watch more OITNB or Transparent. During this time you also need to make the topping, though, so don’t watch as much TV as last time.

9. First for the topping, you mix all the topping ingredients together on medium high for one minute.

10. Once that’s done, take the topping out of the bowl and divide it into whatever number of colors you’re going to end up making and knead the coloring in to each section. I made pink, yellow and cocoa (the cocoa is my favorite). Then divide it all down into twelve portions.

11. Pre-heat the oven to 350 degrees. Flatten each piece of topping and place each piece on top of a piece of the unbaked dough. You need to pat it slightly so that it conforms to the shape of the dough. Here’s a picture of that. 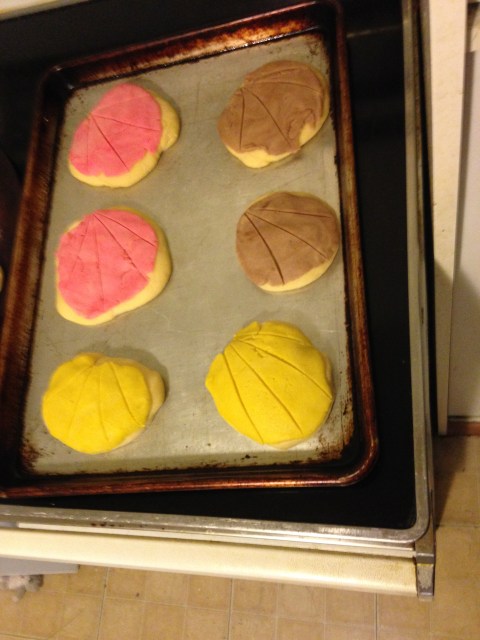 We made conchas, which is a traditional design that looks like sea shells.

12. Slide a knife through the topping to make a design. You’re pretty much done! Good job!

13. Now all you have to do is bake at 350 degrees for fifteen minutes and it’s done! These things taste great as a breakfast pastry, a snack or a dessert. 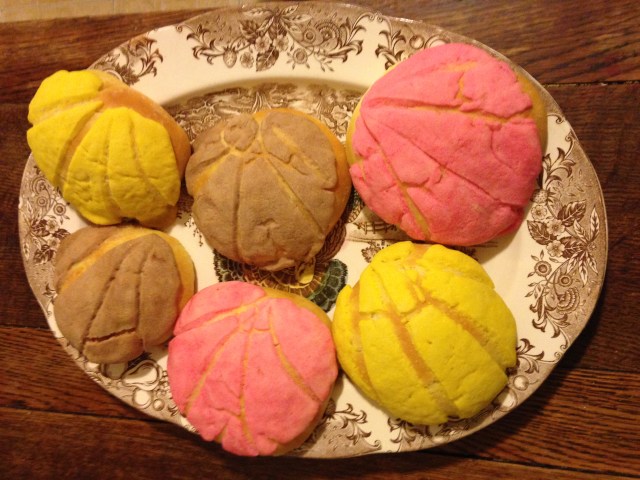 Also called Piggies, because of their shape, these are kind of like cakey Mexican gingerbread cookies. My mom says that when I was really little, like before I even had teeth, she would stick me in a high chair and just let me sit there gumming these things. And as I grew up, marranitos from Guadalajara Bakery were such a staple at our family gatherings that they donated a bunch for my grandpa’s funeral a few years ago. And although we knew exactly where to get them in LA, my mom couldn’t find them when she moved to Idaho. So she had to learn how to make them herself. This time, I helped.

1. Before you do anything else, you’ve got to grate the piloncillo. Piloncillo is a kind of dark brown cone of sugar that you can buy in the “Mexican” section in your grocery store. 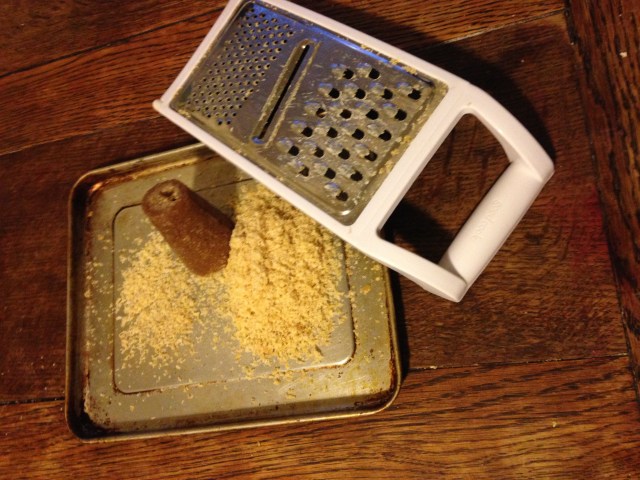 Here’s what the piloncillo looks like while you’re grating it. This might take a while (but it’s worth it).

2. In a large bowl, beat the grated piloncillo and butter until combined. Then add the egg, milk and vanilla and beat until smooth.

3. Add the baking soda and powder, ginger, cinnamon, and molasses and beat until it’s all nice and combined.

4. Beat in three of the cups of flour, but not all of it. Then, you’re going to gradually add the rest of the flour, and as it gets too thick to use the mixer, just switch over to using a wooden mixing spoon. You might just have to use your hands to finish kneading the flour in. You don’t want the dough to be sticky like chocolate chip cookie dough; you want to be able to roll it out.

5. Form the dough into one big lump and wrap it in plastic wrap. Refridgerate it for an hour. Hey look! You can watch even more time to watch your favorite Netflix and/or Amazon original series! You also need to preheat the oven to 350 degrees and line a couple cookie sheets with parchment paper. Or you can use a baking stone and you don’t have to use the parchment paper.

6. Take the dough out of the fridge and cut it in half. Wrap one half back in the plastic wrap and put it to the side.

7. Roll the other half of the dough out on a lightly floured surface until it’s about a half inch think. (Just so you know, some of the ones we made were only about 1/4 inch thick, but 1/2 inch works better.)

8. Using a pig-shaped cookie cutter (you can find a bunch on Amazon) with flour on it, cut out pig shapes and place them on your cookie sheet or baking stone. We used two sizes of pig because we’re cool like that. You’re going to need to keep re-rolling the dough a bunch of times to make all the piggies. And eventually, you’ll do this again with the other half of the dough. 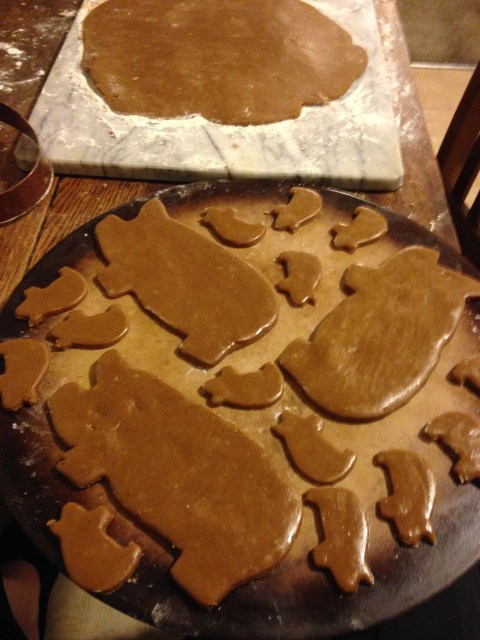 You can also roll them out thicker to make them more cake-like.

9. After the piggies are cut out, brush a thin coat of egg all over them. This will give them a nice shiny coating after they’re baked.

10. Then you bake them on the middle rack for 10-15 minutes or until they’re starting to turn golden around the edges and are cooked through. Just place them on a cooling rack and You’re done! 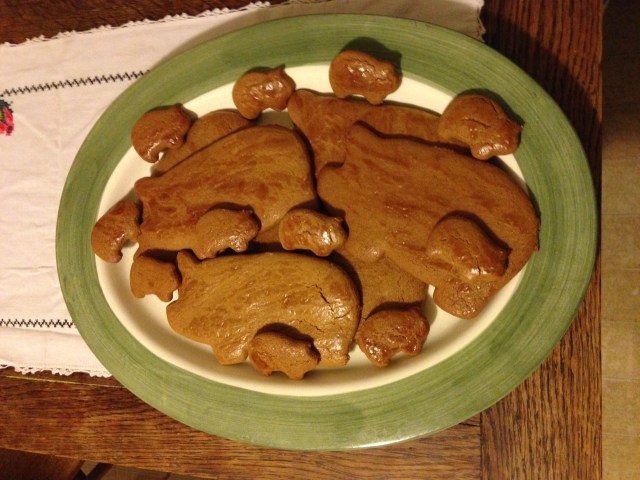 These look so freaking good!

Then you can enjoy them on their own or with coffee or Abuelita Mexican Hot Chocolate. Or, if you’re my mom, enjoy them with a cold glass of milk.