People have many strong feelings about kombucha, or as I sometimes call it in my head, “kombuchacha.” Is it a miracle cure for everything from hangovers to eczema? Is it mildly alcoholic from the fermentation process? Is it stupid and pointless health food obsession? Regardless of all those things, I think we can agree that paying like $4 a bottle for it at the store is unfortunate. Also, while I don’t actually believe that it does anything good for you and kind of don’t even like the way it tastes that much, I love weird food projects and fermenting things in my kitchen. It’s sort of like online shopping; you do some relatively simple stuff on a Sunday afternoon because you’re bored, and 2-3 weeks later, you have something new and exciting in your life, which you may or may not actually like. Anyways, here’s a way to make kombucha at home, if that’s a thing you feel like you’d be into.

(Sidenote: there are resources online about the care, feeding, and appreciation of kombucha that are frankly terrifying to me in their volume and gravity. I used this guide from The Billfold because it was easy to understand and had a lot of all caps and exclamation points. I halved it because it makes an insane amount of kombucha, and there’s no need to go overboard. Here is a recipe from someone who is clearly very invested in kombucha as a concept, if you would like something slightly more legitimate.) 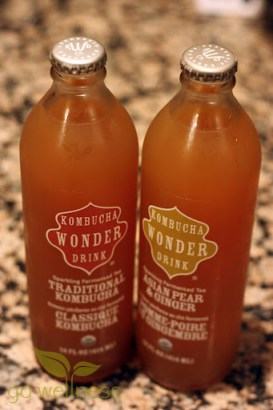 Tea (black, green, white, or oolong. No fancy flavored or herbal stuff.)
1/2 cup of sugar
A scoby (we will discuss further below!) and/or a bottle of storebought kombucha
Glass jar or container
Cheesecloth or other thin cloth that will let air pass through

2. Once it’s reached a boil, add your 1/2 cup of sugar, and let boil for 5 minutes for the sugar to dissolve.

3. After 5 minutes, take the water off the stove, and add your tea. I use 4 teabags, or 2 tsp of loose tea. (Teabags are a little easier, because you can just fish them out rather than straining the water.) Let the tea steep for  15 minutes, and then remove the tea. 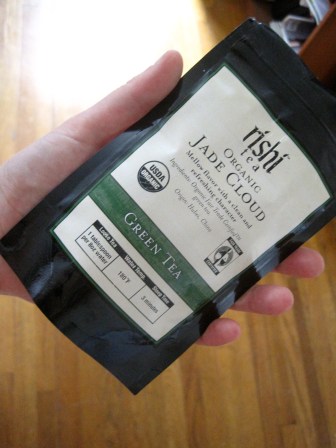 i used this green tea!

4. Now you get to wait for a super long time for it to cool down! Seriously though, wait for it to get to room temperature. Put it in the fridge if you’re in a hurry. But also don’t be in a hurry, because if the tea is too warm it will kill all the cultures that make kombucha kombucha and not just tea, and also you need time to contemplate your scoby situation.

4a. A scoby is a “symbiotic culture of bacteria and yeast.” In real life, it is a thing that looks like a super gross disc of white mucus-y stuff. I know, super appetizing! Sorry, you had to find out how that sausage gets made somehow. It sits inside of sweetened tea, and the yeast and bacteria ferment the sugar, and kombucha is born. “But I don’t have a scoby!” you say. Well sure, in an ideal world, probably you don’t have a mucus-y disc of bacteria just sitting around. The good news is that if you live in a large city or even a small city with a large hippie population, there is almost definitely someone trying to get rid of a scoby on Craigslist. If taking a blob of yeast and bacteria from a stranger you talk to via the internet is too sketchy for you, then there’s always option two, which is: 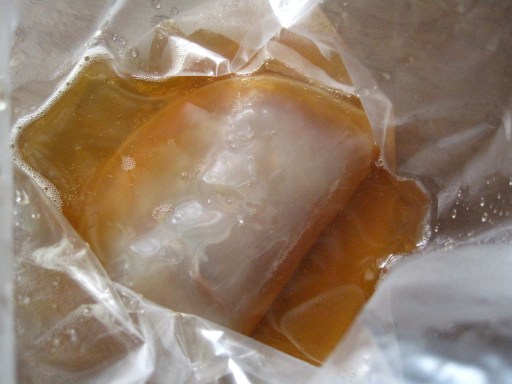 this is a scoby inside a ziploc bag. appealing, no?

5. You’re going to want to pour your tea, once it’s cool, into some glass containers. I use two big glass jars. I usually pour boiling water into my jars first to sanitize them and make sure that the only bacteria growing in them is the kind I want to be drinking, but then again maybe I’m super neurotic, who knows. Once your tea is cool, pour it into your container(s), leaving a little room at the top. If you have a scoby, put it in there! I know, looks delicious. If you don’t, you can pour a half cup or so of storebought kombucha into your container. Either way, cover the top of your container with cheesecloth, and secure it with a rubber band or something. (If you use a Ball jar, like the one on the right, you can just use the jar lid with the lid insert taken out.) 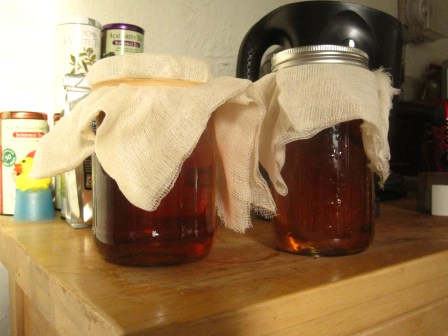 6. Now The Waiting Game! Just let your kombucha hang out for a week or so, and it will turn into kombucha! The only exception to this is if you see anything in your kombucha that looks like actual mold, like black or green. Then you need to immediately cancel any and all plans to drink that kombucha and start over. Otherwise, mazel tov! You can take the scoby out and drink! You can also keep your scoby for more batches of kombucha in the future. Scobies naturally double each time you use them, which is confusing and slightly terrifying, so once you’ve taken it out you can just sort of peel it apart into two discs. Put each of them in a covered container with a little bit of tea for them to sit in, and they can hang out in your refrigerator until it’s their time to shine again. You may enjoy your fizzy sugary hippie drink, and any and all nebulous health benefits that come with it. Enjoy!

Join A+!
Related:get baked with autostraddle