There are some truths about winter that are universally acknowledged; chili, mac and cheese, and giant pans of enchiladas are the best thing you can possibly eat when it’s snowing outside and you don’t expect to be able to leave the house without long underwear for three more months. We’ve already covered comfort food in general, but here is an attempt to speak to that last item. 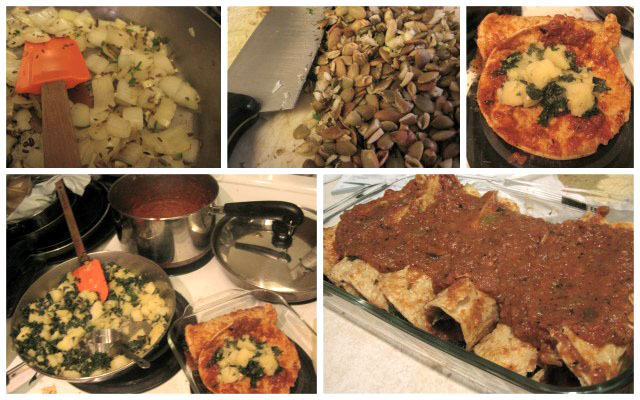 1. First, peel your potatoes, and chop them into 1-inch or so cubes. Stick them in some water and bring to a boil, then simmer for 20 minutes or until done, then drain.

2. In the meantime, you can start the sauce. First turn the broiler on in the oven, and stick the peppers on the top rack of the oven. Check on them every few minutes and turn; they should be getting sort of charred and roasty-looking. Once they’re charred all the way around, take them out and chop them up after seeding them. (If you don’t want to roast them, you can buy canned green chilies. But also, come on, cowboy up.) For the sauce, saute the chopped onion in a pot for 5-7 minutes, then add the rest of the sauce ingredients and simmer for 10 minutes or really as long as you want. Blend/puree it all up so it’s smooth and saucelike — as I have mentioned before, an immersion blender

is a pretty invaluable tool if you ever want a thing that’s not a smooth liquid to become a liquid, but hey, do what you want. Use a blender, whatever. Around this time, start preheating the oven to 375.

3. Heat a smallish dry saucepan over medium-low heat, and toss your pumpkin seeds around in there for a few minutes until they start to get browned and puffed up, then set aside. Chop when they’re cool.

4. Once your potatoes are done, heat up some oil in a big saucepan and put your minced garlic in there, being careful not to let it burn. Let it cook for a minute or two and chop up your kale if you haven’t done that already. Add the kale, making sure that it’s stirred around and coated in oil, and then cover the pan with a lid for a few minutes so the kale wilts some. After that, add your potatoes, the lime juice, broth, cumin, and pumpkin seeds. Stir around to mix and heat through, and use your spoon to crush some of the potato cubes so that everything sticks together a little bit.

5. Now the time has come to speak of putting filling inside your tortillas and making enchiladas. The canonical way to do this is, apparently, to heat each tortilla in a dry pan so that it’s soft and flexible, and then dip it in enchilada sauce before putting it in your baking dish. If you do not choose to do all of this, I will never know. The important thing is to get a tortilla in a baking dish, put some potato/kale filling in the middle of it and line it up down the center, and then roll up that tortilla with the seam pointed down so it stays shut. (If you are having trouble with that last part, I am told that it is okay to use toothpicks to hold them together like deli sandwiches.) Repeat until you are out of tortillas, filling, or room in the baking dish. Pour the rest of the enchilada sauce over the top of the dish, don’t be stingy.

6. Bake for 25 minutes or so, and if you want some cheese (real or fake), sprinkle it on in the last 5-10 minutes. Go ahead and enjoy with 2-4 of your closest friends, because that is how much fucking filling this recipe makes, or just by yourself. No one can blame you for that.