It is, of course, the law that all lesbian break-ups must last at least two (2) full days and include eight (8) attempts at getting back together. Everyone knows that. What most people don’t know, however — and what Gentleman Jack reminded us this week — is that Anne Lister and Mariana Lawton originated the lesbian breakup in the early 1800s, at which time they set the record of breaking up for 17 entire years. It’s even messier than it sounds because they’ve got two decades worth of written letters and Anne’s meticulous diary entries to work from, so nothing is forgotten or even smoothed around the edges. It’s as jagged and painful as it ever was.

They shout accusations at each other with dates and times. Like, “In 1820, at your parents’ garden party, you insulted my suspenders!” And, “You flirted with my sister in 1824, at the Pig’s Belly Inn in York!” On and on and on, re-litigating their worst behaviors and impulses from birth onward. The bottom line, for Anne Lister, is that Ann Walker committed to her. She’s the first person in Anne’s whole life who braved society’s reproach and moved herself and her stuff (some of it; all of it wouldn’t fit) into Shibden Hall. And Anne is determined to honor that commitment. 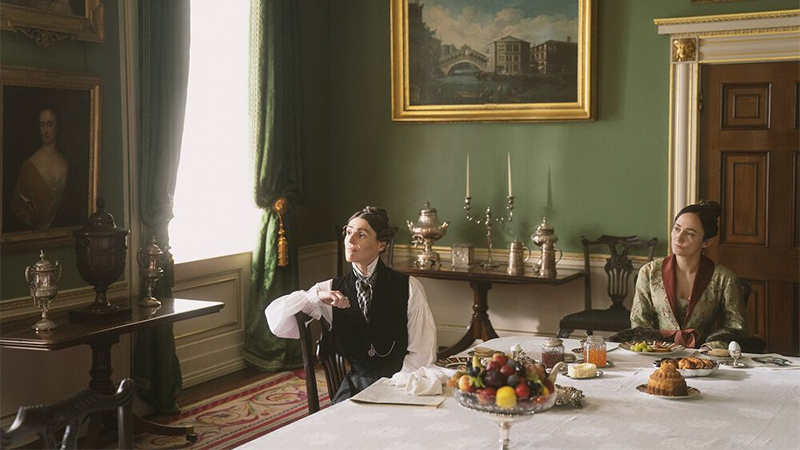 I can tell you’re looking at that woman’s boobs in that painting, Anne! What about MY boobs!

Mariana employs several strategies in her arguments with Anne: She reminds her of the commitment they made to each other, but Anne says that’s null and void because it’s been too long and Charles still won’t die. She calls Ann Walker a bunch of names and insists, repeatedly, that she’s not intellectually curious enough, well-spoken enough, well-mannered enough, well-traveled enough, mentally stable enough, etc. for Anne. She says Anne only “loves” her because her true passion is amassing a Scrooge McDuck amount of wealth. She even does the most dramatic interpretive reading of a casual letter Ann sends over to let her wife know how things are going at Shibden, acting like Ann wrote it in crayon and can’t even spell her own name.  Finally, when all else fails, she takes Anne on a brisk walk (her second favorite thing) and seduces her (her first favorite thing). Anne resists the first night, but gives in on the second night.

Mariana wakes up satisfied and ready to go to church with her ex- and maybe current girlfriend, surely hoping the vicar will preach from Hosea, talking about, “Go, take to yourself a wife of whoredom and have children of whoredom, for the land commits great whoredom by forsaking the Lord!!!!” 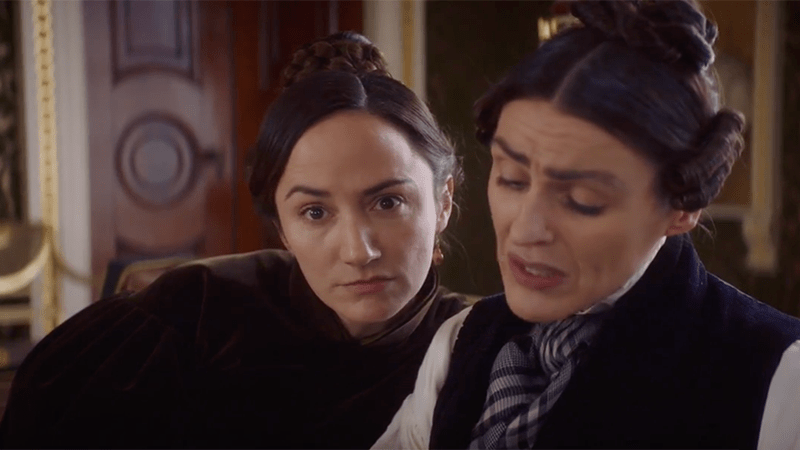 RIP Mariana, you would have loved Taylor Swift.

Because Ann Walker is being awesome back in Halifax! She’s playing cards with the Listers, and allowing herself to feel affection and general amusement for the whole family, even though they are very bad at cards and keeping secrets. She paints beautiful pictures of their time in the Alps. She weather’s Marian’s visit to her worst aunt, and graciously accepts her aunts lukewarm regards when Marian returns. She enjoys a tiny bit of idle gossip with the girls over tea. And she turns down the cousin or uncle or whoever it is that shows up, looking handsome and acting pretty humble actually, to ask her to marry him. Mr James Ingham, of the Mr. Bingley Austen Archetype Index. She says, “It’s a no from me, though. I really am very happy here.” And mostly she is! She does sleep on Anne’s side of the bed, though, and worries, at least a little bit, about the cheating happening down the road at the Lawton’s place.

Before Anne leaves Mariana’s, she tells her to be careful what she puts in her letters, because she shows them all to Ann. This just ignites Mariana’s misery all over again and she yells that she is not the Other Woman! She is the Original Woman! It’s Ann Walker who is the Other Woman! And she got her a patronizing little pocket book as a gift, just to drive the point home. Anne doesn’t open it, but I bet you one whole entire pig that it’s like a sparkly Hello Kitty change purse. 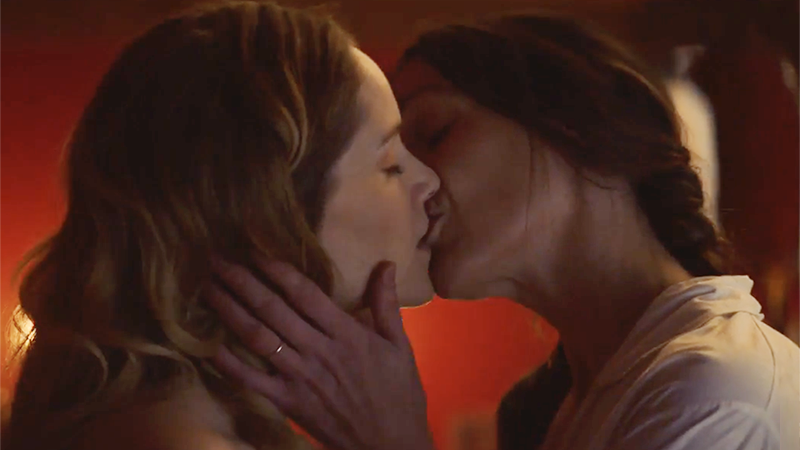 Okay but I *will* have some follow-up questions tomorrow, Anne.

When Anne’s carriage pulls up in front of Shibden that night, the servants go running out to greet her so they don’t get yelled at. And Ann goes running out to meet her because she just can’t help herself. She’s so happy her wife is home! And, honestly, maybe for the first time in her life, Anne is happy she’s home too. When we first met her, the first words out of her mouth, after yelling about how no one else would rise to the occasion of driving the carriage after the groom broke is clavicle, was that Shibden was shabby and so was her family. But what she really meant is that Shibden is always the place she has to run back to after her Mrs. Lawtons and Miss Hobart and etc. break her heart. Her wife is here now. Her actual wife! She has one quick cup of tea and whisks her wife up to bed.

Anne says almost the exact thing to Ann that she said on top of that pit at the end of season one, that she really missed her. Anne says, “Really?” And then Ann says more, says it all, says, “I love you.”

And this time, she really does seem to mean it. 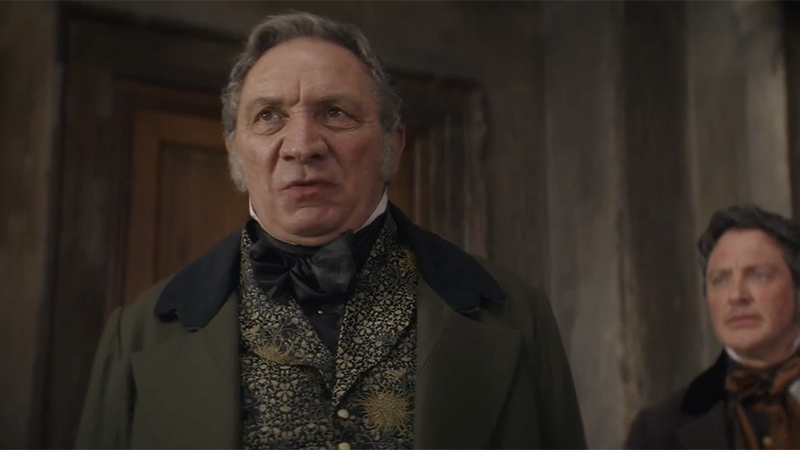 You seem to know a lot about the inner workings of this committee. I’d like to know where you got your information! 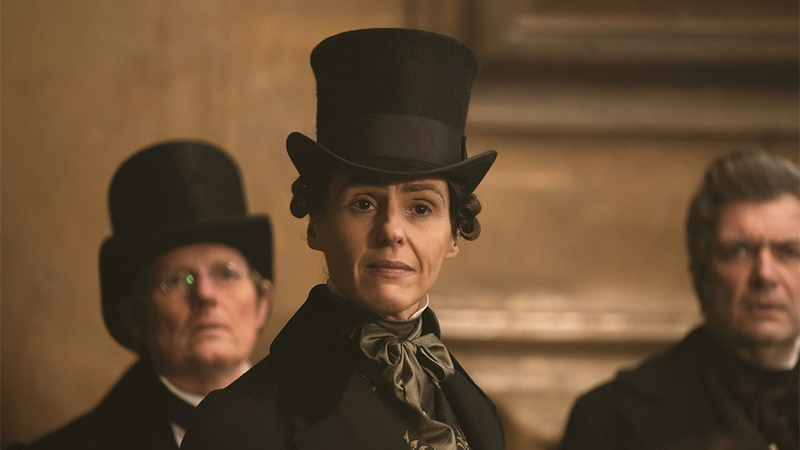 The next day Anne goes to a meeting about whether or not Halifax is going to get some trains or keep hauling their coal around by boat. Anne Lister speaks up in a room full of men and gets her way. For her effort, one of the Yellows escorts her to do the door and calls her Gentleman Jack. She glares at him and marches off into the street, striding past everyone as they stare and point and move out of her way. Same as Mariana did all those years ago. But not Ann Walker. Ann has loved her always, just the way she is.