Tim Pawlenty, one of many asshats gunning for the 2012 Republican Presidential nomination, visited San Francisco today to do a signing of his memoir, ‘Courage to Stand,’ at a private health insurance conference. Then he totally got GLITTERBOMBED, just like Newt Gingrich!

Representatives from the groups CODEPINK waited in line with what appears to be two manilla folders filled with pink glitter, which was unleashed upon Pawlenty when they got to the front of the line (video below).

Activists Nancy Mancias and Chelsea Byers of CodePink were inspired by Gingrich’s Glitter-Bomber, Nick Espinosa, to do their own glitter-bomb. Also the girl who’s yelling sounds a lot like Parker Posey, randomly, am I right?

Codepink, by the way, was founded in 2002, is huge, and describes itself as a “women-initiated grassroots peace and social justice movement working to end U.S. funded wars and occupations, to challenge militarism globally, and to redirect our resources into health care, education, green jobs and other life-affirming activities.” 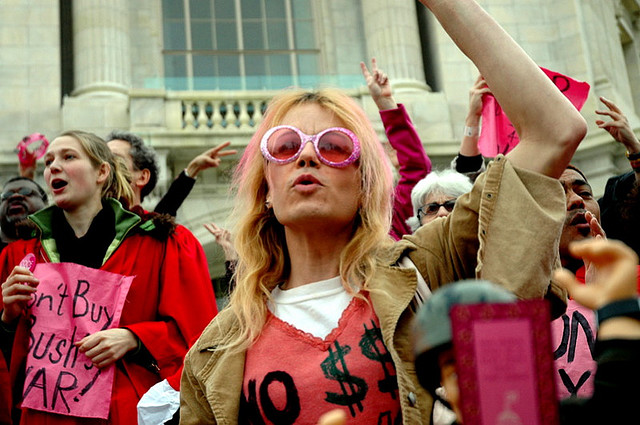 Nancy Mancias, the CODEPINK campaigner who threw the glitter, says:

“We are on the cusp of an important civil rights movement and Pawlenty wants to end it. He has expressed his desire to reinstate ‘Don’t Ask, Don’t Tell’. He’s vetoed equal rights legislation in his home state of Minnesota.”

Pawlenty is an Evangelical Conservative who believes marriage is defined as between a man and a woman and furthermore opposes efforts to “treat domestic relationships as the equivalent of traditional marriage.” He’s also very strongly anti-choice.