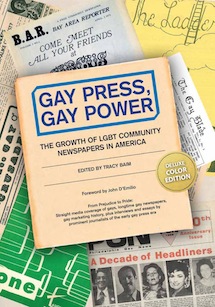 The Advocate first printed in 1967 as an LA events-focused newsletter, and was a national paper with thousands of subscribers by 1969. Though it was far from the first queer periodical — Vice Versa, the first known US publication for lesbians, began in 1947, and ONE began in 1953 — a wave of queer press followed it, including New York’s Come Out!, LA’s Lesbian Tide, Washington’s the Blade and San Francisco’s Bay Times, along with local and national magazines, zines and newsletters.

Gay Press, Gay Power: The Growth of LGBT Community Newspapers in America, edited by Tracy Baim and nominated for a 2013 Lambda Literary Award, chronicles the explosion of the queer press in the 1970s and beyond. It discusses the history of gay media; specific journalists and publications; the challenges of the newspaper business in general and the gay newspaper business in particular; and the role of gay media in research, the present and the future. It also includes photos, reprinted articles and first-hand stories from journalists and from owners and staff of gay publications.

The queer press played a critical role in building community, organizations and mobilization. In an era of police raids, queer media made meetings and events visible, highlighted activist work and reported the news. They provided a valuable and much-needed counterpoint to mainstream representations that, as products of their era, were “moralizing, demonizing, criminalizing, medicalizing, ‘repairing,’ proselytizing, polarizing, ostracizing and often just pitying those poor, sad, pathetic ‘avowed’ homosexuals.” Articles in the New York Times to Harper’s to the Daily News provided sensationalized reports on “Homosexuality a Sickness? ‘No,’ Say the Deviates” and “Homosexual Drama and its Disguises.” Though the first critical responses to such depictions were letters to the editor, they soon expanded into protests and independent print and, eventually, media monitoring.

The Stonewall Riots in New York in 1969 began to change the conversation. Homophobia in print was still rampant, but so were new perspectives. A 1972 series in Chicago Today profiled several queer people and discussed the issues they faced. In September 1975, Air Force Technical Sergeant Leonard Matlovich appeared on the cover of Time magazine under the headline “I am a Homosexual.” A 1979 series in the Chicago Sun-Times looked at the local movement, featured photos of queer people, including people of color, and included an investigation of discrimination in housing.

After a 1975 article on a gay cruise line, the New York Times banned the word “gay” until the 80s.

Gay Press, Gay Power looks at the bumpy media landscape for queer representation and how print media were both complicit in and fought against homophobia.

For the most part the book has a choppy style that doesn’t translate to a book of its length. It’s completely crammed with information but doesn’t often slow down to explore any one issue , which means that at times it reads like an unwieldy bulleted list. As a light, expansive overview of what seems to be nearly all gay media over a three-decade period, it is successful. But there are too many lists and dropped names to explore anything with much depth. Though later chapters focus on specific publications or individuals and provide much-needed context and analysis, as a whole the book is more a reference than a narrative — though it still demonstrates the importance of the press to community, and to the future.

“These gay papers were piles of information for them—to pick up these papers and just hold onto them and to know they weren’t alone. Even if they weren’t brave enough to go to a dance or demo, or even stand on the sidelines of a march, the papers were a lifesaver for so many people to know they weren’t alone. It’s important for people to understand the value of that, and how important it was for people who grew up thinking we were the only people like ourselves—alone in the world. That’s one of the things the gay press did.

“You may find a copy of a gay paper on the street, in a garbage can, on a subway seat, a bus seat, and it would help save your life. Just being there was life-saving.”

sign up for our newsletter
Related:nonfictionQueer Historyread a f-cking book