Yesterday a new bill addressing immigration reform was introduced by Senator Robert Menendez, and it includes provisions for LGBT binational couples that could be groundbreaking if it passes. Co-sponsored by legislators such as Harry Reid and John Kerry, the Senate proposal includes the Uniting American Families Act, which opposes discrimination against gay binational couples and preventing gay Americans from sponsoring their partners for residency and citizenship in the US. The bill has the support of the Immigration Equality Action Fund, the organization that advocates for queer families affected by immigration law and policy. In their own words:

Immigration Equality Action Fund is ready, willing and able to rally the LGBT community, and our families and allies, in support of Senator Menendez’s bill,” said Rachel B. Tiven, the group’s executive director. “Today’s bill is supported by the top Democratic lawmakers in the Senate, including the Chairmen of the Senate Judiciary Committee and the Immigration, Refugees and Border Security Sub-Committee. We stand with them, and our allies in the LGBT and immigrant communities, in supporting reform that honors all families and offers an inclusive vision of America. 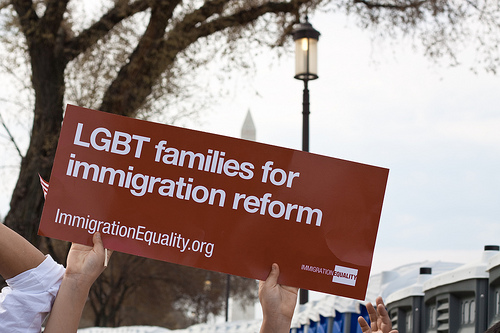 Also groundbreaking is the inclusion of the DREAM Act, legislation that would provide the children of undocumented immigrants with a path to citizenship. DREAM stands for Development, Relief and Education for Alien Minors, and allows teens who are by law undocumented aliens to become permanent residents of the US if they came to the US as minors, have lived here for at least 5 years, graduate from an American high school, and are “of good moral standing,” The bill was first introduced in 2001, but has heartbreakingly failed to pass multiple times since. This means that for the last ten years, teens who have lived in America often for as long as they can remember and who fully intend on becoming active and contributing members of society have instead been rejected from it.

The DREAM Act is brought into greater focus for the gay community this week as Pulitzer Prize-winning journalist and openly gay man Jose Antonio Vargas announced that he is in fact an undocumented immigrant, brought to America by a coyote at age 12.

Vargas has achieved some of the loftiest things that the industry and indeed our country has to offer, holding faked identity documents his entire adult life. He has attended White House dinners after showing the Secret Service false documentation, while knowing that in some parts of the country it’s now legal to have your citizenship examined on a police officer’s whim. He didn’t even know he was undocumented until he was 16.

One day when I was 16, I rode my bike to the nearby D.M.V. office to get my driver’s permit. Some of my friends already had their licenses, so I figured it was time. But when I handed the clerk my green card as proof of U.S. residency, she flipped it around, examining it. “This is fake,” she whispered. “Don’t come back here again.”

Vargas’s story is inspiring, as is the fact that he’s accepted the full possibility of legal consequences as a fair price for sharing it with others and underscoring the importance of the DREAM Act. If Senator Menendez’s bill passes, it could completely transform the landscape for people like Vargas – people who have immigrated here as children and know no other home, and also gay people whose relationships and family ties are still not recognized as having anything to do with citizenship or residency, whose houses are not permitted to truly embody the meaning of home.

Of course, there’s no guarantee that it will pass. But there’s hope. And there’s hope for relief in the meantime: the Immigration Action Equality Fund is calling for a halt of forced deportations and separations of gay binational couples until the fate of the bill is decided.

“As Congress considers legislation to end the unconscionable separation of American citizens from their loved ones, the Administration must also commit to a moratorium on forcibly tearing apart families who would be eligible for relief under this and other bills.”