Yesterday, Democratic Congresswoman Gabrielle Giffords was shot while hosting a public event outside a Safeway grocery store. 11 others were also shot. 6 were killed, including John McCarthy Roll, Chief Judge of the U.S. District Court Arizona, three Giffords staffers and a nine-year old girl.

Obama has called for a Moment of Silence for 11 am EST on Monday.

Gabrielle Giffords, who was shot in the head yesterday by a psychotic human named Jared Lee Loughner, remains hospitalized and her Doctors are “optimistic” about her chances of survival. They have been able to control her bleeding and are “very, very encouraged” by her ability to respond nonverbally to commands by doing things like squeezing a hand or showing fingers.

The bullet went through Giffords’ head on the left side of her brain. Paramedics attribute her survival to “good luck” and “the fact that paramedics got her to surgeons quickly – in under 40 minutes.”

Twenty-year-old University of Arizona student Daniel Hernandez is being credited with saving the life of Rep. Gabrielle Giffords who was critically injured during a shooting in Tucson on Saturday.

According to the Arizona Republic, Hernandez was standing near Giffords during the “Congress on Your Corner” event when the gunfire began. After running toward the sound of the shots, Hernandez assisted the injured by checking for pulses, and when he reached Giffords, he applied pressure to the gunshot wound on her forehead, then pulled her into his lap so she was upright and wouldn’t choke on her blood.

Hernandez then rode with with Giffords to the hospital.

Hernandez, who confirmed he is gay to Instant Tea, is also a member of the City of Tucson Commission on Gay, Lesbian, Bisexual and Transgender Issues. Of Giffords, Hernandez says,  “She’s been a great ally to the LGBT community.”

Second Person of Interest is No Longer Interesting

The “Loughler did not work alone” theory has been squashed as police are now satisfied that the second “person of interest” was just going to Safeway to get some macaroni or something, and although sometimes waiting in line at Safeway makes everybody feel a little testy, he resisted the urge to DESTROY THE FUCKING COUNTRY AND THE LIVES OF HUMAN BEINGS INCLUDING A NINE YEAR OLD CHILD like Dear Dear Jared Lee Loughner, WORST PERSON OF THE YEAR.

Speaking Out Against Violent Rhetoric:

Today’s been a big moment of reckoning for many of our country’s pundits and politicians. Yesterday many were surprised but impressed by Pima County Sheriff Clarence Dupnik’s choice to speak the hard truth:

When you look at unbalanced people, how they respond to the vitriol that comes out of certain mouths about tearing down the government — the anger, the hatred, the bigotry that goes on in this country is getting to be outrageous.  And unfortunately, Arizona, I think, has become the capital. We have become the mecca for prejudice and bigotry… Let me say one thing, because people tend to pooh-pooh this business about all the vitriol that we hear inflaming the American public by people who make a living off of doing that,” the sheriff said during a press conference. “That may be free speech, but it’s not without consequences.”

A Republican Senator spoke anonymously to Politico about the state of rhetoric in his party:

A senior Republican senator, speaking anonymously in order to freely discuss the tragedy, told POLITICO that the Giffords shooting should be taken as a “cautionary tale” by Republicans.

“There is a need for some reflection here – what is too far now?” said the senator. “What was too far when Oklahoma City happened is accepted now. There’s been a desensitizing. These town halls and cable TV and talk radio, everybody’s trying to outdo each other.”

The vast majority of tea party activists, this senator said, ought not be impugned.

“They’re talking about things most mainstream Americans are talking about, like spending and debt,” the Republican said, before adding that politicians of all stripes need to emphasize in the coming days that “tone matters.”

“And the Republican Party in particular needs to reinforce that,” the senator said.

Keith Olbermann’s Special Special Comment addressed the fact that “violence, or the threat of violence, has no place in our Democracy.” He apologizes for anything he’s said that may have “even inadvertently encouraged violence” and calls on other pundits and politicians to redact their own incinidary statements, namely Sarah Palin, Bill O’Reilly, Glenn Beck and Jesse Owens.

Federal prosecutors are charging Jared Lee Loughner with one count of attempted assassination against a member of congress, two counts of killing an employee of the federal government and two counts of attempting to killing a federal employee.

Ummm…. what about the attempted murder and murder of non-federal employees? That’s coming right. G-d the world is confusing.

If any good is to come out of this horrifying event it must be for legislators on federal, state and local levels to undertake immediate in-depth hearings that lead to a definitive change of America’s laws for treating mental health patients. Insurance companies must be required to provide the same health benefits for mental disease as they do for all other illnesses so that patients can be properly treated. Legislators must publicly interview expert witnesses who deal on a daily basis with the overwhelmingly bureaucratic and legal obstacles in their efforts to try to help people with mental diseases. To this end, legislators must listen to family members, law enforcement, medical professionals and the National Alliance on Mental Illness (NAMI); these are the ones who know the solutions as well as the obstacles.

Additional News Items That Will Not Surprise You

Sarah Palin uninterested in accepting the consequences of her actions:

Sarah Palin’s people are totally excusing themselves from being held accountable for the Culture of Violence they’ve created:

But SarahPAC staffer Rebecca Mansour, who has been tweeting in defense of her boss since the tragedy took place, is stating that the crosshairs were never intended to be gun sights.

“We never ever, ever intended it to be gun sights,” she said in an interview with talk radio host Tammy Bruce Saturday. “It was simply crosshairs like you’d see on maps.”

Um, duh? But maybe it’s time to take a look at the UNINTENDED CONSEQUENCES of your rhetoric, weirdos. Further backpedaling:

Tammy Bruce suggested that they could, in fact, be seen as “surveyor’s symbols.” Mansour added that “it never occurred to us that anybody would consider it violent” and called any attempts to politicize the Arizona tragedy “repulsive.”

However it was perhaps Sarah Palin herself who suggested that the symbols were gun-related:

On March 23, Palin tweeted to her supporters a note about the aforementioned Facebook message, writing, “Commonsense Conservatives & lovers of America: ‘Don’t Retreat, Instead – RELOAD!’ Pls see my Facebook page.” And as Politico’s Jonathan Martin points out, in November Palin boasted about defeating 18 of the 20 members on her “bullseye” list.

And? Back in March 2010, Palin’s rhetoric garnered complaints from her number-one fan Elisaebeth Hasselbeck:

Also, Whoopi Goldberg is the Oracle:

“Whatever comes down from this — it’s on your hands. Okay? When you say ‘wipe em out’ and when you sort of gently suggest that people do stuff… let me tell you about the people who tell you to do this stuff, they’re not doing it. They’re at home, they’re not going to jail… your behind is going to jail… your family is going to suffer… and we’ve seen what happens when people listen to other people. We’ve seen it happen here because someone told someone to do something when people flew planes into the World Trade Center… watch yourselves, talking heads, because this is dangerous.”

Meanwhile, much to nobody’s surprise, guess who’s planning a vaycay to the funeral of the 6 people killed on Saturday? 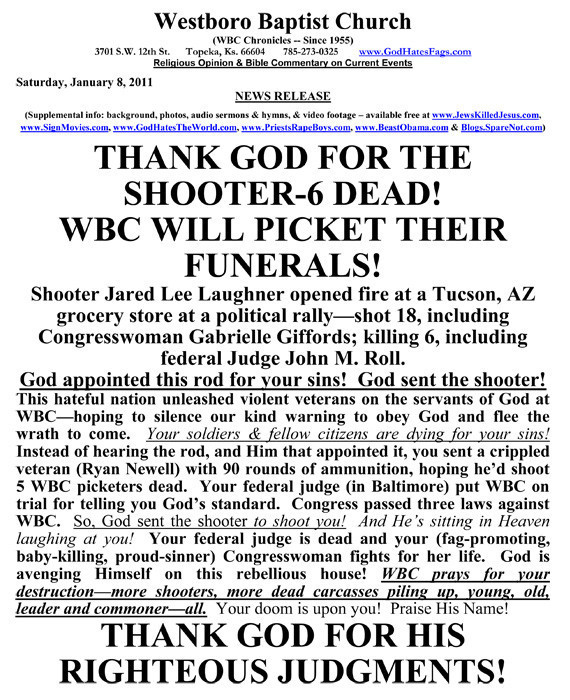