Immigration issues are claiming space at the forefront of the U.S. political stage. While plans for Comprehensive Immigration Reform have festered in the House and Senate, a growing grassroots movement for immigrant justice has also carved out its own space, calling for a halt to deportations and the dismantling of the U.S. Border Patrol and immigrant detention systems.

Many young activists are leading the charge for immigrant justice. As they come out for immigrant justice, many are also coming out as queer. The “I Am UndocuQueer” campaign by Julio Salgado helped highlight the lives and experiences of queer undocumented people in the U.S. Earlier this year we profiled Lulú Martinez, a queer undocumented activist who was part of the Dream 9. The Dream 9 are a group of undocumented students who publicly crossed from Mexico back into the U.S., subjecting themselves to immigration detention and deportation proceedings, to draw attention to how families and lives are torn apart by unjust immigration policies. The Dream 30 followed them in September.

Here are four more queer women immigration activist leaders, all working in different ways to organize for justice around the U.S.: 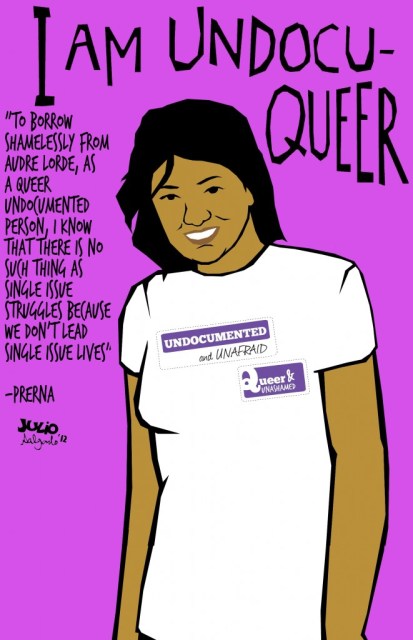 Lal is a queer Fijian immigration activist and organizer. She co-founded Dream Activist, which drives a nation-wide movement of youth activists calling for the adoption of the DREAM Act and broader immigrant justice. Lal has been a major advocate for queer undocumented youth, attributing their growing involvement to the increasing visibility and success of the immigration justice movement. Earlier this year she wrote in the Huffington Post,

“Queer undocumented youth leaders have recently used the increasing visibility of their existence to break down the silos of mainstream LGBT and immigration reform work…. The ongoing success of intersectional work for queer and immigrant rights has fueled calls from both funders and organizations for LGBT and immigrant rights communities to work together. We are not only better together, but we lead multidimensional lives that are affected by both anti-immigrant and heterosexist power structures.”

Lal has written widely on the immigrant justice movement’s connection to LGBTQ issues. With her law degree, she writes on the impacts of immigration law. 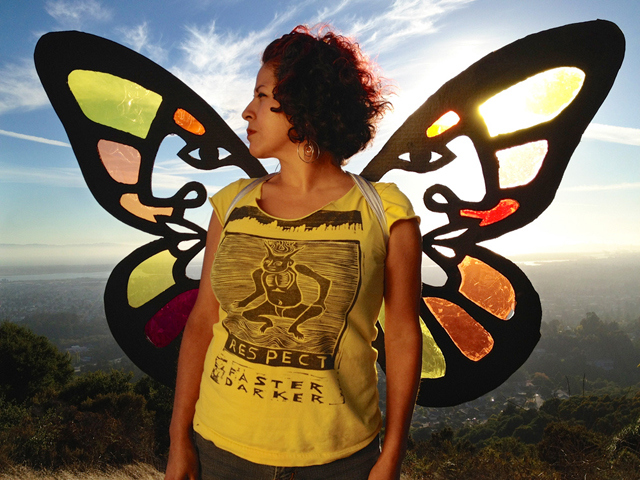 Rodriguez calls herself an “artist, agitator, and techie working for social change,” and she has been organizing at the intersection of art and activism in the Latin@ community since high school. She is a co-founder of immigrant justice groups Presente.org and CultureStrike. Her iconic butterfly design defines the Migration is Beautiful campaign, a group of artists who have come together in support of immigrant justice. 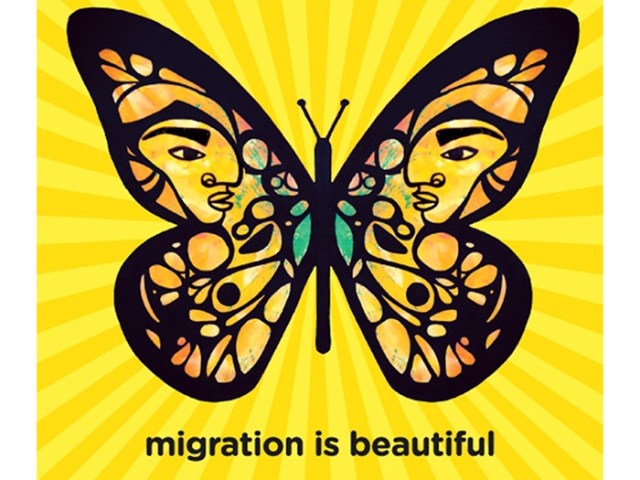 Rodriguez’s work spans a wide array of social justice issues, including racial and reproductive justice, the labor movement and an end to the prison industrial complex. In the Spring 2013 issue of Bitch, she discussed how she discovered the role of art in activism:

“…politically engaged artwork surrounded me, and I knew that posters could educate the community. As the daughter of migrants, I’ve always been politically conscious. I began organizing when I was 15. Organizing requires getting the word out and exposing important issues. It just came together naturally, using my artwork to be involved and express myself made the most sense.”

Much of Rodriguez’s work specifically references different movements and organizations, from May Day to International Women’s Day. 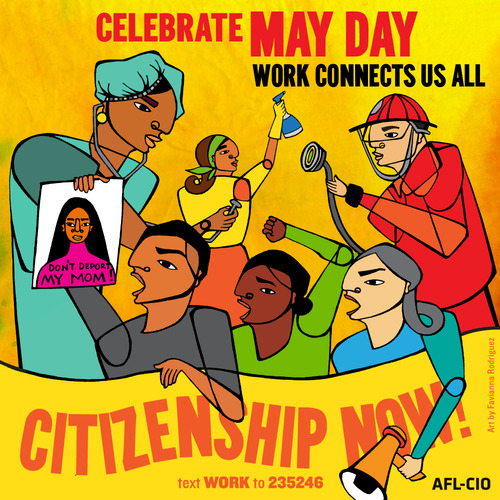 In 2010, Carrillo occupied Senator John McCain’s office in Tucson, AZ, in what is understood to be the first act of civil disobedience by undocumented activists. Carrillo was arrested, and faced deportation hearings. Carrillo came to the U.S. from Guerrero, Mexico with her mother when she was eight. Her story has been circulated widely as part of the “DREAM Now Series: Letters to Barack Obama,” a campaign calling President Obama to push for the DREAM Act, which creates pathways to citizenship for undocumented people who came to the U.S. as children. In her letter, she wrote,

“I’ve had people tell me that it’s not a big deal, that I should keep on waiting for the DREAM Act to pass. My life has been on pause, rewind or replay for years. Waiting is not an option. That is why undocumented youth like myself are risking everything, right now, to pass the DREAM Act, this year. If we’re putting our lives on the line for this, Mr. President, the least you can do is call members of Congress and ask them to do the same.” 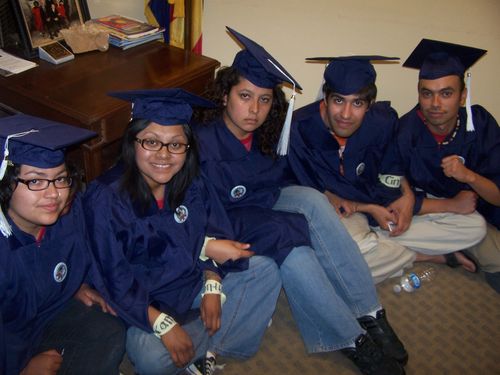 Carrillo continues to organize with the UndocuQueer movement, advocating for the DREAM Act.

Unzueta sat in with Carrillo at Senator McCain’s office in 2010, and she has been organizing since 2001, when she was scheduled to testify in front of Congress to advocate for the DREAM Act until 9/11 pushed off the hearings. Unzueta is a co-founder of the Immigrant Youth Justice League (IYJL) and organizer with the National Day Laborer Organizing Network (NDLON). She is a queer undocumented activist, born in Mexico City, now living in Chicago. Unzueta has coordinated media for immigration activism across the U.S., including the No Papers No Fear Ride for Justice on the Undocubus across the Southern U.S. She has been at the center of campaings to change the mainstream media coverage of immigration issues, successfully lobbying the Associated Press and other media outlets to officially drop the use of “illegal” when describing undocumented people. 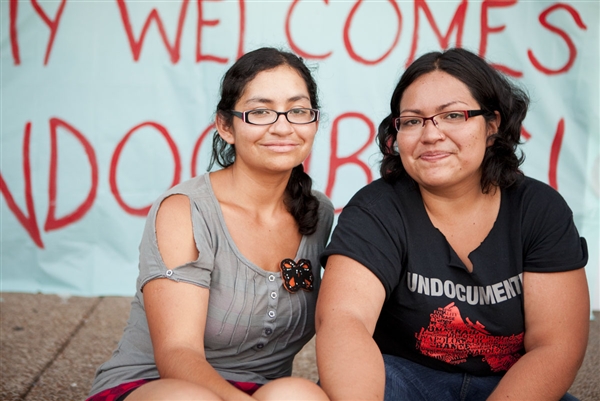 Unzueta challenges the immigrant justice movement to look critically at the way in which they fall into the trap of mainstream political language around categorizing immigrants as criminals. In an interview with Mike Ludwig of Truth-Out.org, she said,

“I feel like we have to go into a deeper conversation and ask ourselves, does someone who is a legitimate criminal, whatever that means, deserve to get deported? Even in the migrant rights community. Our response has been as a national immigrant rights movement, to say, ‘We’re not criminals,’ instead of to question even the categories of criminality, and if that’s the best way to keep our communities safe.” 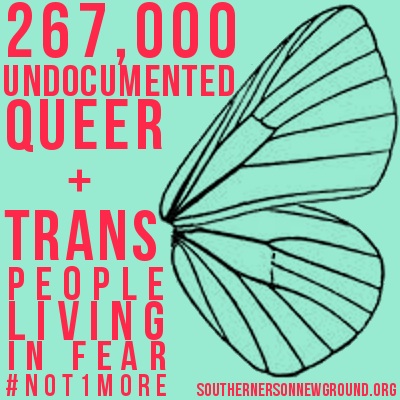 Lal, Uzueta, Carrillo, and Rodriguez are just a few of many queer immigration activists out there. The hundreds of thousands of queer and trans* undocumented people living in the U.S. resist unjust immigration policy by doing what they need to survive, every day.

Join A+!
Related:Lists/Top 10swomen of color