The tarot’s fiery suit of wands is the realm of action, passion and inspiration. This is where we find our dearly-held ideals reflected back to us, where we gaze into the flames that burn deep inside us and discover what makes us feel fired up and excited. The cards here encourage you to push at your boundaries, go deeper into your principles, get out of your comfort zone and really challenge yourself. A journey through the deeply creative suit of wands sees the development of inspiration into something tangible, showing how we take that spark or fire within us, and make it manifest, as activism, projects, art and more. 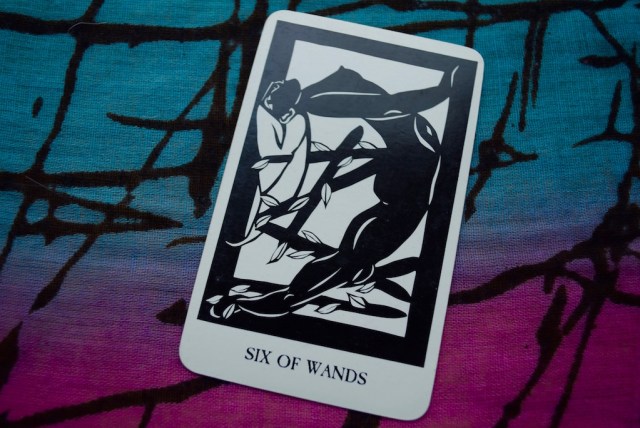 From Thea’s Tarot by Ruth West

The flip side of this is, of course, frustration, burnout and failure. It’s here that we also find the overwhelm that comes from taking on too many things and broaching our capacity, and the necessary experience of failure. Not every exciting project can be a roaring success and the suit of Wands reflects this without judgement.

Naturally, these are often cards of ego, arrogance and conflict. Where passions run high so too does our delicate self-esteem, as well as the defences we create to protect ourselves and our egos. Whilst Wands cards can make us feel invincible, they can also remind us of our fallibility. Whilst they encourage us to Act! Begin! Do! they also show us that our capacity is not unlimited. Welcome to the rollercoaster. 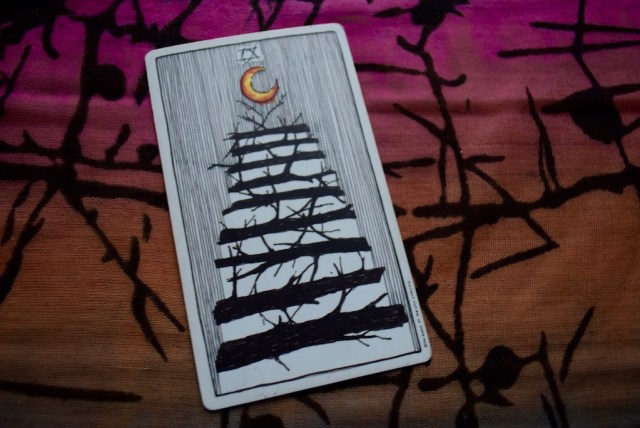 From the Wild Unknown Tarot by Kim Krans

I feel like the wands cards are always challenging me to think deeply about my commitments, the way I use and focus my energy. They call me out when I’m directing it in all the wrong places (whether that’s from procrastination or plain fear) and encourage me when I’m on the right track. Most importantly, the wands cards bring me back to what I really believe in, what matters to me in my soul and in the realm of the wands: my wise old gut.

Today, I’m feeling like I need a big injection of that fiery, activist energy. I want to get all of my Wands cards out and play with them, let them inspire me. So I’m gonna take a whirlwind tour through the suit of Wands and follow that gutsy, fiery energy as it burns high and bright, or low and smouldering. Grab your cards and join me!

The Ace, Two and Three of Wands take us through the initial stages of starting a project, from inspiration, through planning, to your first steps. The Ace is where you have your Big Idea. This is where the Universe says YES! YOU MUST DO THIS THING! (You might not actually know what that thing is right now, but that’s not important.) Right now, we’re all about positivity, a burst of energy and a sense of real possibility in your gut. Focus on your ideals, your principles, the stuff that gets you all fired up. If you’re gripped by the urge to start something new, take this card as a massive thumbs up. If you’re feeling stuck and bored, change direction. It’s time to up the energy!

When you feel this way, it’s likely that you want to get started right away. However, the Three of Wands is where the action comes in and you can take your first real steps; before that, you gotta spend some time thinking it all through. 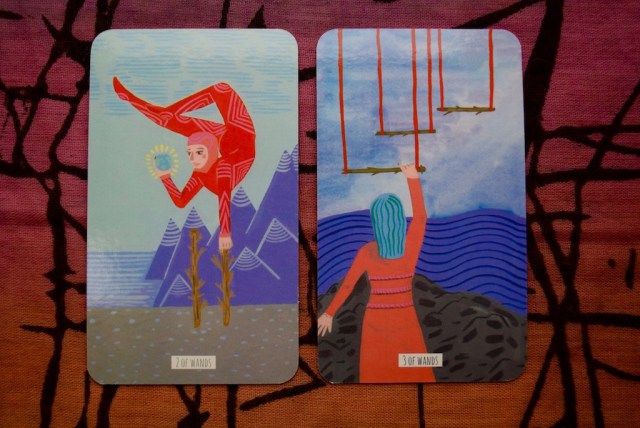 From the Circo Tarot by Marisa de la Peña

The Two of Wands is a card of stillness, I think. There’s frustration here, a sense of being pulled in two directions at once as you fight the urge to leap straight in, and instead allow your idea to crystallise. You quiet your ego, which craves the glamour of action. There’s an ebb and flow of throughs as your mind wanders through your idea — if there’s a ‘planning’ card in the wands suit, this is it.

Then, when you’re done thinking, you’re reading for that first step! When you see this card in your readings, it’s time to be bold, to step into what may feel like the unknown, in pursuit of success. It’s a card for self-belief and for committing to make your dreams a reality — even if it’s possible you may fail. 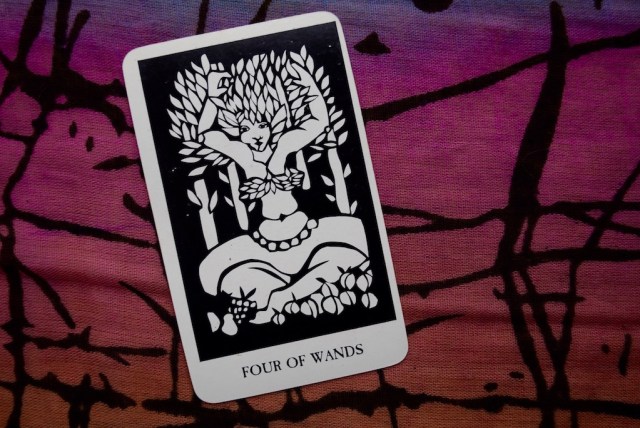 The Four of Wands represents that stage in a project that we most often forget: the bit where you get to stand back for a moment, realise how freakin’ brilliant it is that you made a start on this thing, and give yourself a massive pat on the back. It’s a card of celebration and letting your hair down, traditionally associated with weddings and other community celebrations. I often see this card appear to simply say “take a night off,” but it’s also about recognising the hard work you’ve put into something. Or, it could just mean a party.

By the time we reach the Five of Wands, we begin to encounter the darker stuff that comes from acting on your beliefs and principles. Like I said, so much of what drives us is ego, and the Five of Wands is where we see that ego bumping up against others. 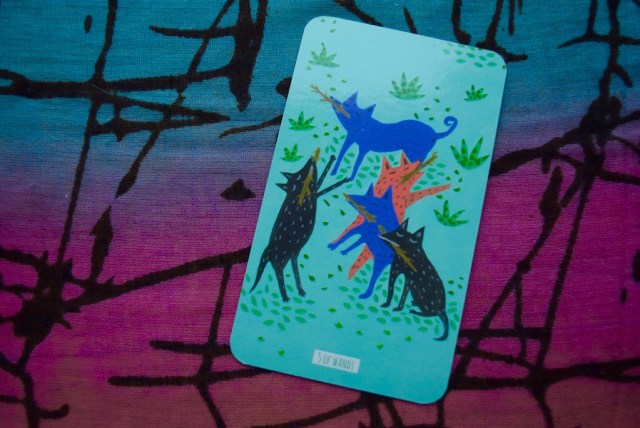 I tend not to take this card too seriously in a reading (there are others for more serious conflicts, like the Five of Swords) — to me it signals a sort of ‘playground politics’ situation. That macho behaviour where everyone is shouting, just to find out who’s loudest, who’s at the top of the pecking order…and who’s at the bottom. We’re sussing out the hierarchies in our situation. So often, I feel like the Five of Wands is advising a person to rise above it and focus on what’s really important — but sometimes it can be fun, or actually helpful to engage in this heated energy.

The Six of Wands continues the ego theme, discussing pride and victory. It’s traditionally a card of success, showing a person riding home from battle having ‘conquered their enemy’, and you can definitely interpret it that way in your readings — I regularly see it popping up simply to say “that went well!” A more nuanced reading delves into the specifics of your situation, in particular this idea of having won the battle, but not necessarily the war. It’s so easy to get caught up in the little victories that satiate our ego, forgetting the bigger struggle at hand. In this way, the Six is a reminder to take a look at the bigger picture and make sure you’re focusing your energy on what actually matters. 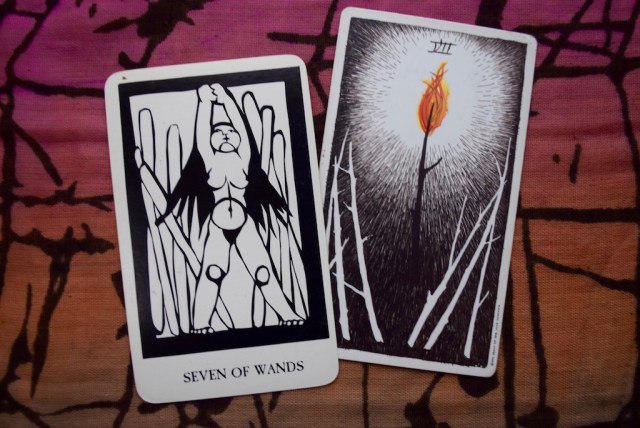 I think of the Seven of Wands as the activist’s card, as for me, it’s centred on themes of standing up for who you are and/or what you believe in, even if you are in a minority of one. It represents a dilemma to which all LGBTQ folks can relate — whether to be visibly out and proud, or hide or tone down your queerness so as not to cause others discomfort (or jeopardise your safety). I love the way Kim Krans illustrates this card in the Wild Unknown Tarot — a burning flame, perhaps just a little match, bright enough to cast all of its adversaries into the shadows. Where the pride in the Six of Wands often begs further exploration, I usually read the Seven as encouragement to be proud of who you are, or to stand up and fight for what matters to you.

The Eight of Wands is one for getting your message across. From writing concise emails to finding the courage to grab the mic, this card suggests communicating with clarity and efficiency. It’s a good card for community situations, advocating for the swift and objective conclusion of issues, encouraging you to speak up, be heard and be counted. 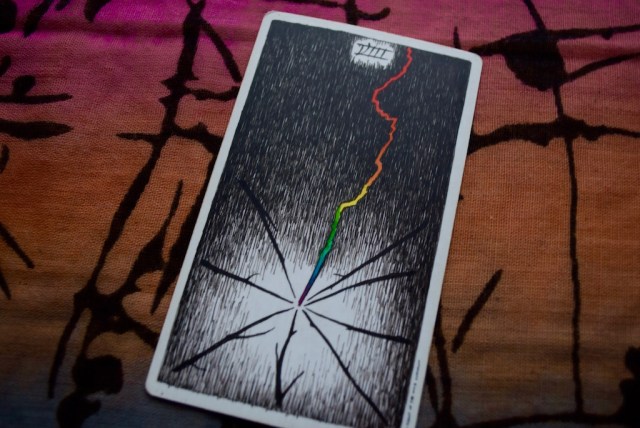 The Nine and Ten are where we find the inevitable burnout in the suit of Wands, though they deal with it in different ways and advise different remedies. Both witness your tiredness, both let you know that you’ve taken on a lot, or worked hard, or are close to your limit, and that this is taking its toll. However, where the Ten of Wands just looks like flat out exhaustion — a person weighted down by all those projects and ideas, unable to do much of anything whilst carrying so much — the Nine of Wands is a more encouraging sight. “Don’t give up!” it urges, “you’re nearly there!” Again, I think of the Nine as an activist’s card — one that reminds you that this was never going to be easy, and that it’s worth pushing through when the going gets tough. 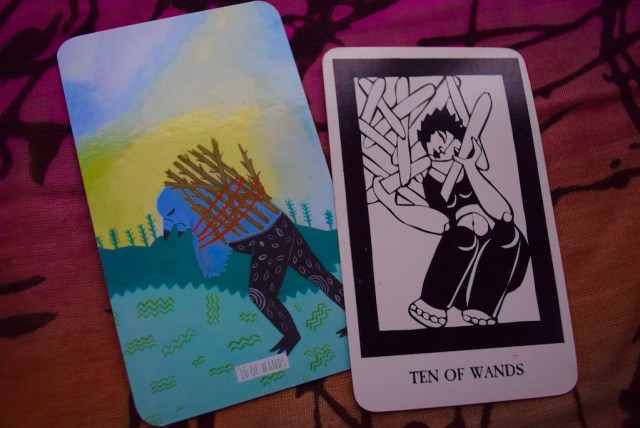 The Circo Tarot and Thea’s Tarot

This brings us to the ‘people cards’ of the wands suit — the Queen, King, Page and Knight, or whatever they may be called in your deck. These guys make a pretty rad bunch!

There’s the Queen of Wands — my favourite of all — confident, witty, unapologetic, unafraid to be 100% who they are. In the Rider Waite Smith version, Pamela Colman Smith seats her with knees spread wide, an image I adore. The attitude is like, ‘here I am and honestly, you can like it or lump it but I ain’t changing’. What a role model. A feminist and a champion of the freaks, the outcasts and the activists. The King of Wands, then, is a natural leader, someone who possesses that organiser know-how, who can gather the troops and get a thing done. Fearless and experienced, the King displays that awesome ability to get everyone on board with their cause, and who knows how to encourage people to work together, by demonstrating great leadership. 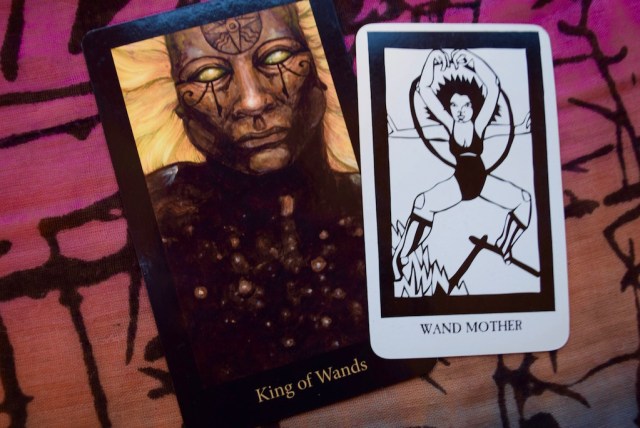 The Mary-el Tarot by Marie White, and Thea’s Tarot

The Knight of Wands is where we see a pumped-up ego at it’s loudest and boldest, trumping the idea itself. As the ‘teenager’ of the wands suit, this represents someone who is totally fired up about their awesome idea…but lacks the foresight to see it through. It’s not necessarily a negative card, though — often, this ‘don’t think just do’ energy is exactly what your situation needs! Just be aware that this is the kind of energy that burns out fast, and that to see your ideas through, you’ll need to ‘mature’ pretty quickly. Meanwhile the Page of Wands is a curious soul, someone who wants to explore their idea, travel, learn, look at it from many different angles. The Page represents that wonderful willingness to experiment — unlike the Knight, it’s almost ego-less, not caring what anyone thinks or the fame their actions may bring, but instead, fascinated by the idea itself, the spark. The Page tries stuff out, doesn’t care about failure, loves to push at their ideas and see which ways they can be bent. 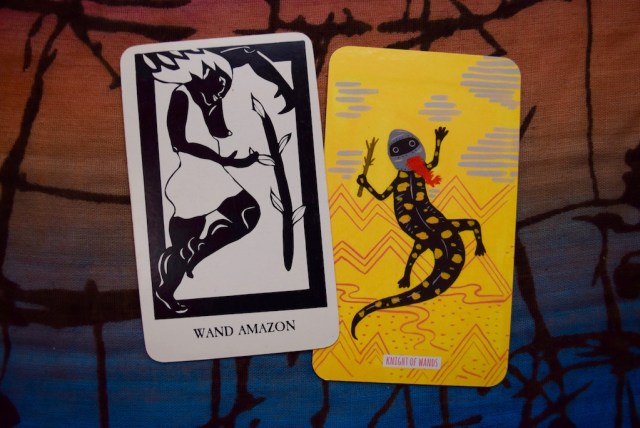 Thea’s Tarot and the Circo Tarot

Also! If you’re interested in exploring the tarot suits in this way, I’ve shared similar posts about the other three: Cups, Pentacles and Swords.