Here’s a simple exercise that can help you to go deeper into the meaning of a tarot card: comparing the same card from two different decks. Checking out the diverse ways that artists interpret and represent your chosen card provides interesting new angles and ideas, and helps you to develop your own personal meaning for the card.

When I first started learning tarot, I had my trusty, classic Rider Waite Smith deck and that was it. I hadn’t really clocked that there were other decks out there. It wasn’t until, a year later, I picked up Stephanie Piu-Mun Law’s Shadowscapes Tarot that I realised that you could interpret cards in different ways, that there wasn’t just ‘one set meaning’ for each card (i.e. the one I found in Joan Bunnings’ Learning the Tarot, and/or on Biddy Tarot.)

What a revelation! Law’s illustrations — so completely different to Pamela Colman Smiths’ — blew my mind with their deviance from my accepted ideas of each cards’ meaning. Just working with that one additional deck developed my understanding of the cards’ meanings in huge and important ways. Essentially, it taught me that each tarot card is open for interpretation, that it can mean different things at different times, to different people, in different contexts. Okay, that can be a little confusing when you’re starting out, but for me this was outweighed by the journalling possibilities and the opportunity to explore a card from different visual and symbolic angles. Thus, I feel that this is a great exercise for both tarot learners and more experienced readers…especially when you feel like you’ve hit a bit of a rut in your tarot practice, or have become complacent about your studies and think you ‘know’ the cards! It provides useful fodder for tarot journallers and bloggers, providing plenty of those wonderful “OMG, I never thought of this card that way before!” moments.

Below, I’ve compared and contrasted a few of my favourite tarot cards to give you an idea of just how different these depictions can be.

(By the way, you don’t have to go out and buy a new tarot deck to do this comparison exercise. Instead, you can use a Google image search to check out how other artists depict different cards.) 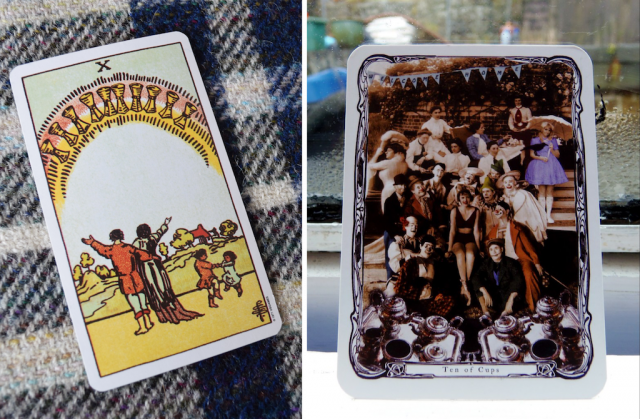 Nowadays, the Ten of Cups is one of the key cards in a deck for me, but I didn’t always feel this way. The Rider Waite Smith Tarot’s illustration of a happy heterosexual family, two kids dancing in front of a pretty red-roofed house wasn’t my idea of ’emotional fulfillment’, though I did my best to read it this way. The revelation, for me, came when I saw Clarissa Drengsen’s beautiful collage of circus freaks sitting beneath a ‘Welcome Home!’ banner in her Steampunk Tarot. That idea of homecoming came to form my strongest interpretation of this card: for me, it’s about a sense of coming home, emotionally, or spiritually. And when I see more conventional, heteronormative versions of this card appearing in my readings, I tend to interpret them more along the lines of ‘what society wants for you’ — family expectations for your happiness, for example. 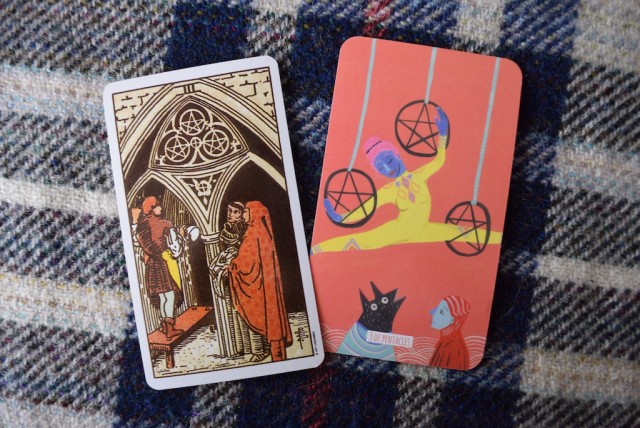 This is classically interpreted as a card for teamwork and community effort, which I really like. In many versions of the Three of Pentacles, we see a group of three people, working together on a joint project. However, I was able to take these ideas a little further by looking at other versions of this card. In the Circo Tarot, for example, an aerialist does her thing, whilst two others look on. I read this card as more focused on the individual discovering their unique talents and skills, then looking for ways to bring this to a greater whole. So it’s still about teamwork (here, that might be the circus as a whole show with many parts), but it’s a celebration of how each of us brings something special to that team. It’s about finding your niche, then using it together with others. By the same token, then, it can be about appreciating difference, and understanding that others are bringing their unique skills to your group project, too. 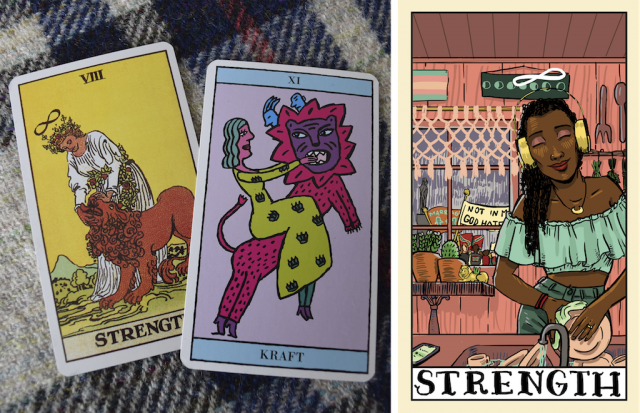 Strength is one of those cards that nearly always seems to bear the same kind of illustration no matter the deck: a lion, usually being ‘tamed’ by a young woman. The implication here, for me, has usually been about being in control of our reactions — the fierce, wild lion and the ‘gentle maiden’ both being present with in each of us, but we usually have a choice about the way we react to the world around us. We can react with anger, violence, or fear, or we can react with love and compassion, even in the face of oppressive and harmful shit.

Whilst I definitely feel there’s a place for this interpretation (I’ve learned so much from practicing this very thing of responding to hate and fear with love, rather than fuelling the fight with my own fear and anger) I was relieved to see an image from the forthcoming Delta Enduring Tarot created by Egan, which features a Black trans woman peacefully ignoring the haters outside her window and getting on with her life. I doubt that she is as blissfully unaware of the fear and hatred that surrounds her as her expression suggests, but Strength is major archetype: this is not so much about the moment, but about responding to hate with self-love and self-compassion. In this sense, it’s about the strength in boundaries. Again, this woman — and the community she represents — is not responding with fear or anger (at least, not in this moment). She’s not responding at all, except to put on her headphones, listen to music that lifts her up and strengthens her confidence, and get on with being her beautiful self. 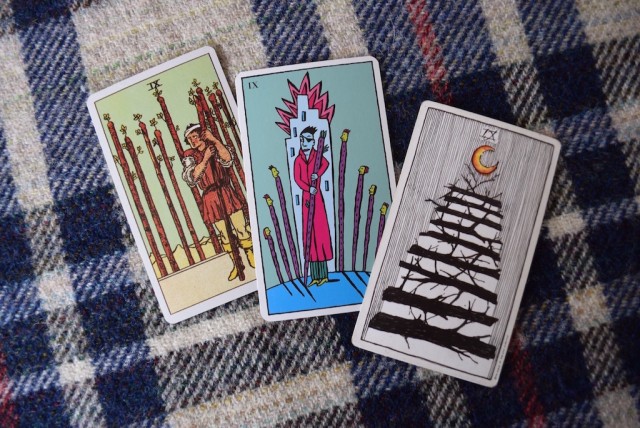 Often, when I see this card, I see a person approaching burnout. A tired person, who may feel they have little left to give. The Nine of Wands is the card directly before the Ten of Wands, which really does indicate burnout, and as such it carries an implicit warning: take care of yourself right now, you’re at capacity, and maybe you need a break.

The Wild Unknown Tarot‘s version of this card feels different. There’s still a strong message of hard work, still a steep climb ahead — that ladder of branches doesn’t exactly look like a comfortable journey. But at the top, we see a crescent moon; a symbol of intuition. So here, this card has come to represent soul work, to me. It’s about that work and that tough journey being worth it. Where in the first card, we don’t know whether that tired person should quit now, go to bed, take a break, or battle on, here, it feels clear: keep going, it’s worth it. The goal at the end is more than the glory of a completed project, deeper than a battle won: that moon tells me that it’s about personal growth, too. 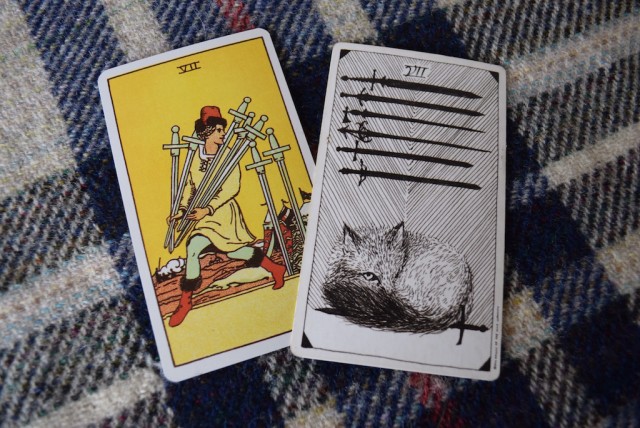 It’s hard to put a ‘positive’ spin on the Rider-Waite-Smith version of this card, which shows a shady-looking character sneaking away from a military camp at dawn, having stolen all of their comrades’ swords. Not that it’s necessary to put a positive spin on every card! It’s totally okay for this to simply mean ‘you’re being dishonest right now’ or ‘someone stole something from you’. However, there are other interpretations. Again, for me it was the Wild Unknown Tarot that really opened up my ideas about the Seven of Swords. I didn’t feel as though the little fox here was doing something dishonest, it was more that the image raised questions, like “why does she feel she has to hide that part of herself?” and “what does that hidden sword represent?”

In this way, the card becomes more complex in its meaning. It can be about whether you feel safe being yourself at this moment, or it might draw attention to a part of yourself or your personal truth that you’re not yet ready to share with the world. I can point to dishonest behaviour that is a survival tactic, or essential self-care, or a kindness to someone you love.

As you can see, comparing cards from different decks can provide a whole new set of symbols and ideas to reach back to when reading tarot — regardless of the specific deck you are using. For me, this exercise enriches my understanding of tarot and how it can represent our diverse lived experiences.

How about you? Is there a deck or artist that opened up the way you interpreted your cards? Let us know in the comments!