In a stunning homage to one or none of the following…

…Fletcher today dropped the video for “Becky’s So Hot,” her controversial breakup anthem that launched a flurry of negative and positive feedback mere weeks ago, as it was a direct reference to Fletcher’s ex-girlfriend Shannon Beveridge’s new girlfriend Becky, which some are finding funny (and very specific to queer people, as we alone must grapple with the difficult possibility of being attracted to your ex’s new partner) and others are finding kinda creepy.

The aesthetics of the video, directed by Millicent Hailes, are deliberately over-the top and a lot fun and also quite sexual. In a subtle or perhaps imagined (by me) homage to Britney Spears’ “Touch of Your Hand,” the video opens with Fletcher’s freshly manicured nails traveling beneath her tights. We then transition into Fletcher’s fantasy — Fletcher on a rotating stone platform in front of a Blue Sky With Moon, Fletcher in a triangle of fire in a Pastel Desert Sunset, Fletcher riding a motorcycle through a Sexy Urban Cityscape and eventually, Fletcher making out WITH TONGUE with Bella Thorne and also someone else in a dark room. 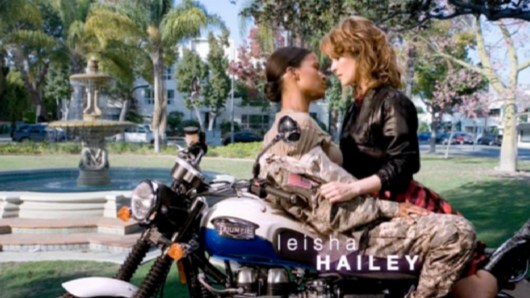