Last week, Babeland workers voted 21-4 to join the Retail, Wholesale and Department Store Union, making Babeland the only unionized sex shop in the U.S. We spoke with two of the employees who helped organize wage workers across Babeland’s three New York City locations.

Former Autostraddle writer, Phoenix Casino and Lena Solow work at Babeland because they believe in the company’s mission, love the customers and feel proud of the work they do every day to destigmatize sex and promote pleasure. However, working an hourly wage retail position at a store that sells sex toys and provides free sex education can be emotionally intense and sometimes dangerous labor. 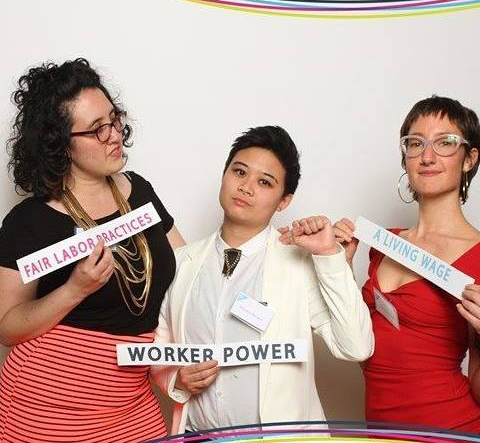 For example, Solow recalls a time when she saw a man closely following two women around the shop. When she tried to politely intervene and asked the man to give the other customers some space, he became aggressive. He called her a “bitch,” yelled at the customers and became threatening. When he finally left the shop, Solow was shaken. Only she and one other co-worker were on the floor. She decided to close up a little early because she felt unsafe.

Babeland had no protocols or training around dealing with physically aggressive or threatening customers. When Solow asked her managers what she should have done, the response from management was that they didn’t know. Luckily, Solow wasn’t disciplined or fired for closing early, but she felt she didn’t get a supportive response from her managers, that they weren’t interested in addressing the need for employee safety and security proactively. Babeland workers often deal with inappropriate phone calls and customer behavior and have to rely on their own instincts and each other to stay safe when those situations escalate.

Because of the nature of the items sold at Babeland and the topics staff talk about with customers, there are often issues of customers asking personal questions or making personal assumptions about the staff. Sales associates are also sex educators and have to navigate boundaries with the customers carefully, as well as provide information about sexuality, sex and gender. Staff often deal with inappropriate personal questions and even sexual harassment on-the-job.

Trans and gender nonconforming workers who are misgendered by customers were instructed by management that they “should expect to be misgendered on the floor and shouldn’t feel upset or correct people,” according to Solow. Casino added that workers were told that “if they couldn’t handle misgendering and harassment, maybe they shouldn’t work at Babeland.”

Casino says that workers just want safety and respect. “I think it’s really important to give dignity to the work we do. A lot of the work we do is so stigmatized. Like, ‘Oh you work in a sex toy store, a sex shop. What do you expect? Get over it.’ There’s an expectation of mistreatment. We’re here to say that we deserve dignity. We deserve safety. We deserve respect.”

Being unsupportive of trans and gender nonconforming workers is a problem in and of itself. It is even more surprising and concerning for a store that is intentionally built on a feminist model of sexuality to not take the concerns of trans workers seriously.

Additionally, gender affirmation products for transfeminine people and trans women were only recently added to the store, though products for transmasculine people have been on the shelves for some time. Trans women weren’t consulted in the purchase of the new products. Some trans staff have had trouble getting the company to respect their name and gender by updating it in the company computer system.

These are just a few of the reasons that Babeland workers voted to form a union. They also want more transparency around hiring practices, consistency around discipline decisions, a say in fair wages, safe working conditions, and support for airing concerns.

image via the Retail, Wholesale, and Department Store Union website

“Part of why we’re in this place of feeling like we need a collective voice on the job is because we’ve brought up some of these concerns in the past and not felt like they were being listened to or addressed by management,” Solow said. “Now we get to sit down with management and work out a contract. We all want it to be safer and more sustainable to work at Babeland.”

Solow and Casino both feel strongly that the reason for having a union at Babeland is that they care so much about the company and what the company represents. That’s why they organized. “Babeland has this really incredible mission about being sex positive, body positive, affirming of people of all genders and sexual orientations,” Solow said. “We really believe in that mission and in the workers at Babeland being supported in living up to that mission.”

Casino added that the workers at Babeland are mostly marginalized workers: “Working class women, trans people, people of color, queer people…for us, that’s our entire workforce. There is a lot to what feminism and sex positivity means and we’re trying to bring that into a more updated context. Feminism is for poor people. People of color. Trans people. Gender nonconforming people. [Feminism] is for intersections of all those identities. Feminism also means that people with marginalized identities who are doing work should be treated with dignity and respect.”

“On top of that, Babeland is an awesome place and an awesome job, but it’s also a retail job,” Casino said. “Retail is undervalued as a job, as a career path. Something for me that is very feminist is bringing more unions into retail. People who are working these jobs, many of whom are women, [should be] valued.” 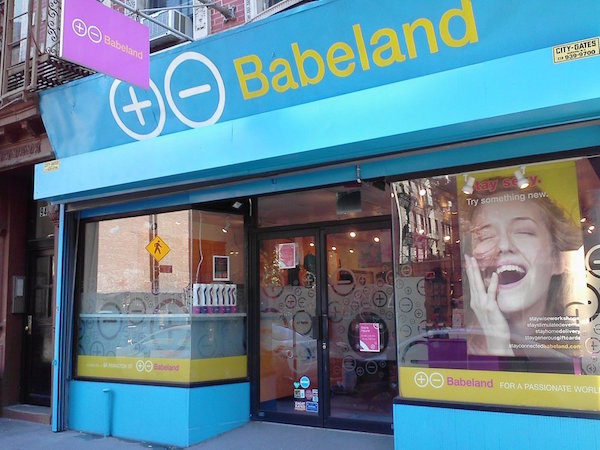 Babeland’s lower east side location (via the Babeland website)

At the end of the day, Casino and Solow want Babeland to thrive as a business that respects worker rights and does empowering and affirming work as a unionized sex shop. Solow describes the experience of shopping at Babeland as “life-changing” and a safe place for queer people to have their identity and sexuality affirmed. “How much more incredible would it be,” she asked, “to know that the workers providing this incredible service to our communities are being treated fairly and appropriately?”

Casino added that unionization doesn’t have to be thought of as “this adversarial thing.” They said, “We’re doing this for love. We’re doing this because we love and respect our coworkers. We love creating this positive space. We love the people who come in and open up to us. We just want to be as true to that image and mission as we can be and that means taking this into a collective process.”

Solow and Casino urge union supporters to continue shopping at and buying from Babeland. “We want Autostraddle readers to feel good about spending money at Babeland,” said Solow. “We want people to feel good about standing with us and making sure the people doing the labor are respected and valued as well.”

Contract negotiations between the union and the shop owners will start soon. Solow and Casino hope other sex shop workers and workers in related retail fields will be inspired to unionize, too. “A really big benefit to being another store that’s unionized is that we add more union density,” explained Casino. “People say it’s retail. It’s just a shitty job. But part of the reason it’s bad is that stores aren’t unionized. The more people who see this who are inspired to start unions, that raises the standard of living for everyone and puts the pressure on companies that aren’t unionized to do better.”

To show support for Babeland workers, you can tweet or post to social media using the hashtags: #fistsupforbabeland (pun intended), #dildosunited, and #1u.

Take a selfie of your “fist” using the #fistsupforbabeland hashtag and tag @Babeland_NYC to let the shop owners know you support the workers’ union.

Nothing is hotter than buying your sex toys from a sex positive, union-strong shop!

EDIT: An earlier version of this article incorrectly identified Babeland as the first unionized sex shop. Babeland is currently the only unionized sex shop in the United States. However, a group of workers organized at Grand Opening in Boston in 2005, joining UNITE HERE (Union of Needletrades, Textiles and Industrial Employees and the Hotel Employees and Restaurant Employees International) and making them the first unionized sex shop. Grand Opening is currently closed, though two of their employees went on to open the Self Serve Sexuality Resource Center in Albuquerque, New Mexico.