Federal policies barring any man who had ever had sex with a man from donating blood began in 1983 as the HIV/AIDS crisis ravaged parts of the U.S. Today, in an age of highly effective blood testing and much lower transmission rates, the regulations feel more like a relic of gay panic than a public safety measure.

This week, the Food and Drug Administration will consider recommendations from the American Medical Association, the Department of Health and Human Services and numerous gay advocacy groups to adjust the rules that prohibit blood donation by any man who has had sex with another man since 1977. Trans women who have sex with cis men currently face the same restrictions as gay men. The recommendation is to drop the lifetime ban in favor of a one year deferral period, which would prohibit men who have had a sexual encounter with a man in the last 12 months from donating.

The policy mirrors those in the England, Australia and Japan, which have one-year deferrals. A study by the Australian Red Cross found that the policy change there led to no increase in the number of HIV-infected units but an overall increase of 900,000 units donated. Scientific and medical evidence demonstrates that the policy would keep blood recipients safe, and it would be a step forward for gay rights, advocates say.

“The evidence is there; they’re just being cautious about implementing it,” said Ryan James Yezak, founder of the National Gay Blood Drive, to the Washington Post. “[But] we will get to where we want to be. . . . People want to serve their country. They want to do this thing that other humans partake in. Not being able to do this is wrong.”

You can watch Yezak speak before the HHS blood advisory committee on November 13th, the day they voted 16-2 to recommend the policy change.

The policy under consideration still may exclude men in longterm, monogamous same-sex relationships despite their very low risk for HIV. According to Vox, “the FDA has maintained that it still hasn’t figured out which eligibility questions they’d need to ask to ‘reliably identify’ gay men who are at a lower risk of infection.”

Today, World AIDS Day, is an important opportunity to remember the history of HIV and its impact on gay and queer communities both as a medical epidemic and a social disaster. Gay and bi men fought from their sick beds for their partners’ right to visit them in the hospital and to receive inheritance. Meanwhile, politicians like President Ronald Reagan literally laughed off the devastating illness in 1982, five years after the outbreak began and a year before the FDA banned male gay and bi blood donors. 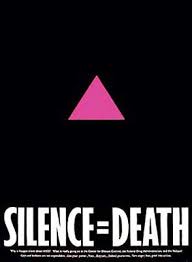 The Silence = Death campaign began in New York in 1987.

So this week, as the FDA considers this important change, let’s remember how AIDS continues to brutalize queer and people of color (and QPOC) communities disproportionately, examine how we still stigmatize AIDS patients and criminalize gay and bi men, sex workers, drug users and others as potential AIDS carriers, and continue working to eliminate the disease around the world. Find a local or national AIDS research or advocacy organization to support — The National AIDS Trust in the UK and the AIDS Research Alliance in the U.S. are good places to start.  A change to FDA policy matters not just because it is based on sound science and will potentially increase blood donations — it would be a powerful and tangible step away from a culture that criminalized homosexuality and AIDS for decades.