I have crafted a pie chart that explain the catalysts for my own personal queer awakening, and this is what it looks like: 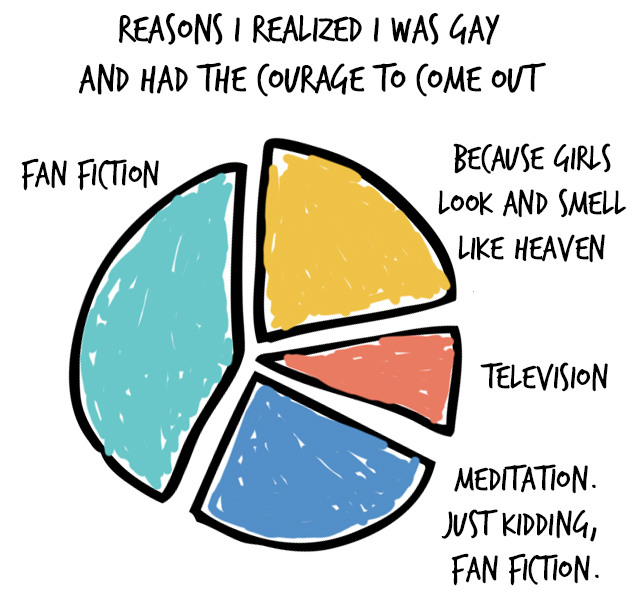 A long time ago, in a cubicle far away, I was pretending to crunch numbers but was instead lurking on the Television Without Pity forums. Someone in the forums mentioned the old British primetime soap called Bad Girls and linked to some fan fiction about Helen Stewart and Nikki Wade, the prison warden and inmate who fell in deep/desperate homosexual love during the show’s first two seasons. I clicked on over to read about Helen and Nikki, thinking I would learn a little something about Her Majesty’s Prison System. Instead, I learned a little something about breasts and clitorises and the magical things that happen when they are pressed against one another. When I left my office that afternoon, my imagination had gone completely berserk and was never, ever, ever shifting back to normal.

Do you ever wonder why there’s such a shameful stigma surrounding fan fiction? If I learn to play the guitar by pinging out classics from the Eagles, no one judges me. If famous artists cover classic recordings, no one even blinks. It’s completely socially acceptable to play around artistically in the sandboxes created by musicians — but when we do the same thing with the art of storytelling, we’re branded as a bunch of weirdos.

I think the reason is twofold: Fan fiction is a female-dominated dimension, and fan fiction is a sex-positive space. The world has been trivializing women and shaming them for their desires for forever, and so of course society is going to ridicule a hobby where women are working out their sexuality and gender, and exploring a million ideas about the intersection of those things, and being encouraged by other women to not settle in relationships or settle in the sack. Fan fiction is a lust-filled town along the path to freedom where millions of sexually-satisfied women have gathered to break the chains of the patriarchy.

Also, it’s just a lot of fun and is a rewarding way to explore the full lives of queer TV characters when networks and showrunners and producers refuse to do it.

So. Starting today, I am going to review femslash fan fiction from every fandom under the sun. I’m kicking it off with Glee, because fandom has written these characters better than the writers of the actual show since all the way back in season one. Here are the 1o sexiest fics I could find.

Pairing: Brittany and Santana and Quinn, hey-o!
Plot: The Unholy Trinity are made for each other, in every way.
Hotness level: Sizzling
Show, Don’t Tell:

Santana grunted, and when she pulled away she had Quinn’s bottom lip caught between her teeth. She let it drag roughly before she finally released it. It made Quinn suck in a hissing breath and she flicked her tongue over it, tasting the way it was swollen and hot.

Brittany sat down on the other side of Quinn and her heart knocked in her chest, filled with anxiety. She kept sucking on her lip and she looked between Santana and Brittany, a little bit intimidated by how confident and easy they were, just sitting there in their underwear. Brittany’s was bubblegum pink with white polka dots and Quinn stared at the muscles on Britt’s stomach.

“Get comfy, Quinn.” Santana said, and she stood up quickly and pulled Quinn’s cardigan off. It left Quinn wearing a loose, billowy white top with tight black leggings underneath. She looked up helplessly at Santana and then over at Brittany, who only smiled at her and tucked a loose lock of Quinn’s hair behind her ear.

“Santana gets bossy sometimes,” Brittany explained. She shifted up and crawled towards the head of the bed, where Santana had a mountain of pillows. She patted the blankets until, reluctantly, Quinn followed. She shifted and sat until her back was resting against the pillows and Brittany began running her fingers through Quinn’s hair.

“Don’t act like you don’t like it,” Santana said, and she and Brittany shared a look that Quinn couldn’t penetrate.

“We have to be easy with Quinn,” Brittany said in response. “She’s like a delicate flower with a baby tree troll inside.”

Outsider Observations: Brittany, Santana and Quinn are the only triad relationship outside of Harry, Ron and Hermione that I could ever really see working. And now I have compared to Glee to Harry Potter. Feel free to hit me with a Cruciatus curse.

“I’m serious,” I said reassuringly. “I feel so good when I’m with you.” I kissed her neck again and started to trail my fingers under her shirt.

“Hey, no, its okay,” she muttered. “We should…” She trailed off when I pressed my hands against her chest, over her bra. “Should…get…back to…studying.”

“You can’t tell me you’re not turned on right now,” I muttered against her throat. I felt her gulp and I smiled. “Why don’t you quiz me?” I wiggled my legs beneath her, wrapping one hand around her back as I lifted the other up under her shirt to her shoulder and easily flipped her onto her back. I started to attack her neck again and she groaned.

“God, Brittany,” she muttered. She had lifted her hand to her forehead and her other hand was scratching my bare side soothingly. “I can’t even remember anything.”

“Mm,” I said, licking her lips. She fell back into the pillow and let me slide my tongue into her mouth. I think we forgot about her needing to quiz me, because I stayed and made out with her for a while. It wasn’t until she twisted and let me run my tongue over her neck that she said anything at all.

“Where’s the… s-sternum?” she asked. She sounded so quiet and small, I barely heard her. But I moved down to her chest and ran my tongue over the ridge between her breasts.

“And th-the thoracic arch?” she groaned. I lowered, sucking and kissing every inch of skin between her sternum and the arch were her ribs ended. I felt her shudder beneath me as my fingers fumbled with her pants.

Outsider Observations: One of my favorite Glee things, both on the show and in real life, is how Brittany is the only one who makes Santana act as sweet as a basket of kittens.

8. drowning in your dizzy noise

Santana finds herself staring—only noticing Rachel’s slowing words in the vaguest sense—close enough now to see the flashes of pink tongue behind even white teeth. Such a waste, so much turmoil over Finn. A mouth like that…

A few seconds later, the heat of Rachel’s body occurs to Santana as an abstract sort of observation. It’s cozy and intimate and somehow pressed against the length of her own, her palms already cupping the girl’s cheeks. They’re warm, too, and she can feel Rachel’s jaw moving under her fingers as their lips brush together with slow pressure.

This isn’t even their first kiss.

It’s that thought that jolts Santana into breaking it. She pulls back dazedly to see Rachel staring back at her with wide eyes and her expression frozen in shock, salty tracks drying down to her chin as her mouth hangs slightly open. Santana can feel Rachel’s racing pulse under her fingertips as they stare at each other.

Her lips are shiny. She snaps her hands away from Rachel’s face like they’re burning as soon as it registers, stepping backwards unsteadily. Turning to put some much needed space between them, Santana bites down on her cheek to jolt some reality into head before she does something stupid, like suck that glistening lip back into her mouth.

What the fuck just happened.

Stray Observations: I’ve never really thought about Rachel and Santana as more than friends but now that I have, I can’t stop.

Her fingers skimmed up a little higher, her own adrenaline starting to surge as she felt the skin under her fingertips growing warmer and warmer. She carefully edged up so high, she could feel a damp heat coming from inside her underwear. The lean, corded muscles in Santana’s legs were twitching under her bold touches and Brittany subconsciously licked her lips, her tongue dragging slightly over the salty, sensitive skin of her palm. Her eyes closed for a moment, letting herself imagine it wasn’t her own skin she was tasting.

Santana’s leg jerked even harder, the muscles taut and straining now. Brittany glanced up curiously to see rich, chocolate brown eyes fixed firmly on her mouth and realized that Santana had seen the movement. Now that it had stopped, she looked up to meet Brittany’s eyes and her jaw clenched, because Brittany was very familiar with what Santana looked like when she was really turned on, and unless everything about her sex drive had changed in the last few months, Brittany was very sure that they were going to be doing a lot more than cuddling tonight.

Her eyes glazed over, caught for a moment in a mental montage of all the things she wanted to do. Since they were sixteen, they had never gone this long without touching each other. Despite their personal issues, other relationships, and Santana’s deep denial, they excelled in finding excuses and justifications to have sex. Lots of sex. Any and every way they could think of.

It was the comforting constant in her life. Her safe place. Santana’s skin next to hers felt like home. One of the reasons why she loved scissoring so much was because it let every bit of their skin touch that was possible (and Brittany had done extensive testing to be sure).

Outsider Observations: Does Brittany chew on her lips a lot on Glee? I never noticed, but she chews on her lips in every Brittana fan fiction. It’s kind of adorable.

“Are you thinking about it? Thinking about me lying between your legs, my tongue licking at you just the way you need, until you can’t do anything but lie back, close your eyes, and beg for more.” Santana groans at her own words, bucks up into her hand as she remembers the feeling of Quinn tense and trembling, knotting her fingers in Santana’s hair as she tried to guide Santana’s mouth into giving her more.

“Tell me, Quinn, do you want my fingers, too? Ask for them nicely.” Quinn lets out this strangled little whine, like she wants to tell Santana to fuck off, but can’t quite make the words come out. Santana closes her eyes, tries to regain a little control of her breathing before she continues. “You didn’t seem to have any problems begging me last time, Quinn. I think you liked it.”

Outsider Observations: It’s always hard to tell in one-shots if characters are in-character, but I really do believe Santana would do dirty talk better than potentially anyone on earth.