Welcome to the fifth recap of the second season of Faking It, a home makeover show from the network that brought you Sucker Free on MTV.

We open in the open-minded oasis of Hester High, where Karma’s confession regarding “faking lesbianism” has gone viral, even earning a mention in Principal Penelope’s morning iSkorklePad announcement:

Penelope: Remember to take the high road and give your best wishes to Karma Ashcroft, because even someone who fakes lesbianism and offends an entire persecuted minority deserves a happy 16th birthday.

Do they though. Do they really. 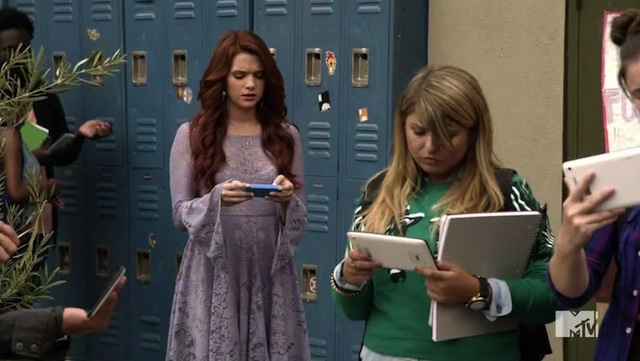 Now I know TWO secrets. Amy got dissed… and Karma got kissed! -A

Everybody gives Karma the evil eye as she chats up Amy via mobile, who’s having a Sick Day because of strep throat but is somehow dressed with jewelry on and her hair done, which puts her ten steps ahead of me on my Well Days. 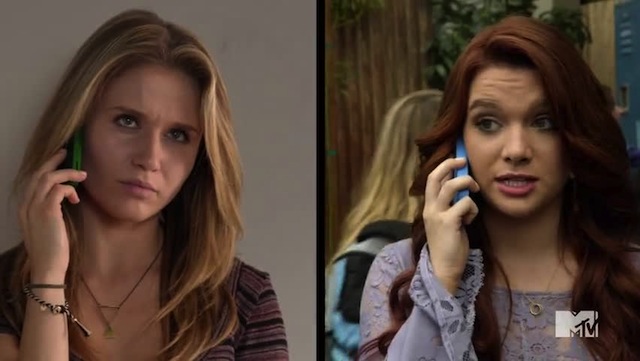 Just brown rice? Really? But it’s your birthday, you really should spring for the sweet and sour chicken

Karma’s struggling to keep up with Amy’s adorable chatter regarding future milestone birthdays because Liam Booker exists in her immediate vicinity and gave her a birthday card sealed in her locker like The Secret. But, before they can spend too long having eyeball sex or Karma can open her Birthday Card, Amy shows up! SHE WASN’T SICK AFTER ALL! She’s just planning the most epic birthday scavenger hunt ever featuring all the best moments of their friendship and lovingly entitled “A KARMY RETROSPECTIVE.” 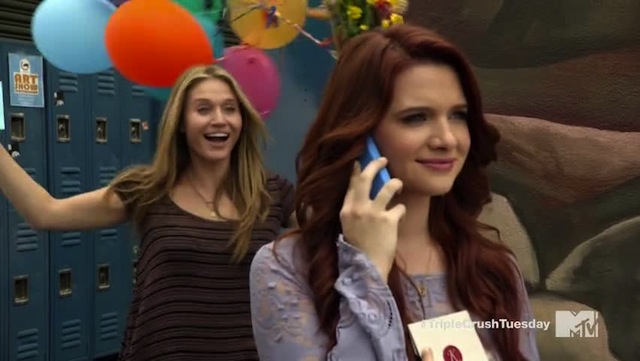 I JUST SWITCHED TO OB TAMPONS!

I bet it’ll involve lots of processed carbohydrates, vomiting, and Twilight. Hopefully it’ll end with Amy faking her death and hiding a bunch of golf clubs in her husband’s sister’s barn.

Amy: What’s up with the longing Liam looks? I thought you two were through.
Karma: Oh, we are! Completely dunzo. Trust me.

Although Karma’s worried about becoming social pariahs again, Amy isn’t, because all she needs in this life of sin is her and her best friend. She hands Karma her first clue, and Karma unconvincingly fakes being excited about it when all she really wants to do is dry hump Liam in the science room. 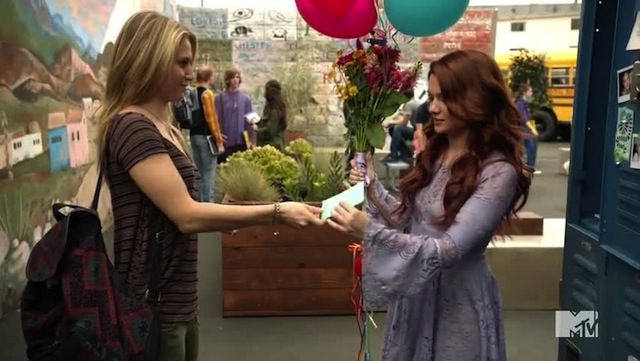 Cut to the Aggressive Art Room, where Liam’s pounding a hammer against a surface and Shane’s trying to convince him to talk it out. Then Theo shows up to invite the kiddos to his Mixed Martial Arts Class, which unfortunately is not about wedding crafts. 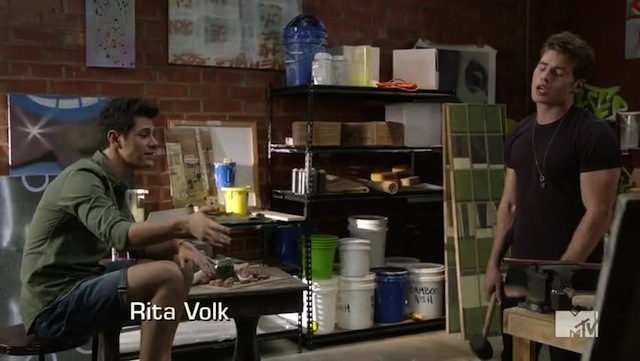 Shane: Nice try, Theo, but what Liam needs is to talk it all out over some grilled cheeses at Millie’s Diner.
Theo: What is this, The View?
Liam: I’m sorry but that class is just what the doctor ordered.
Shane: You’re not the doctor, you’re the patient, you can’t prescribe your own medicine.
Theo: Wow, you really think you know what’s best for everybody, don’t you?
Shane: It’s a gift.

Liam wants to punch someone in the face so SEE YA.

While exiting the Art Expression Room, Shane crashes smack into Lauren, who’s been snooping as per ushe due to her hot burning crush on Theo. Shane ships it:

Shane: A high-maintenance time-consuming girlfriend is exactly what Theo needs. 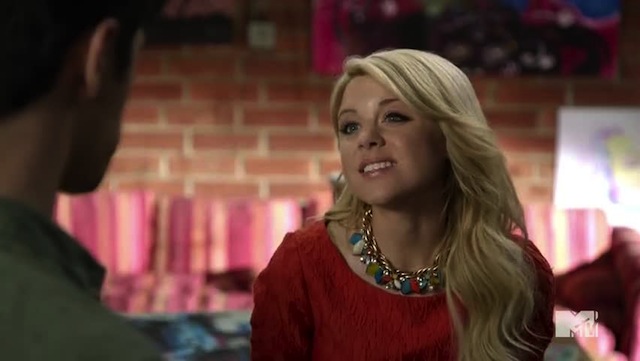 Cut to to Karma’s room, which Amy has filled with balls from Chuckie Cheeses or McDonalds Playland or something to recreate where they met as young toddlers full of life and hope and candy necklaces. 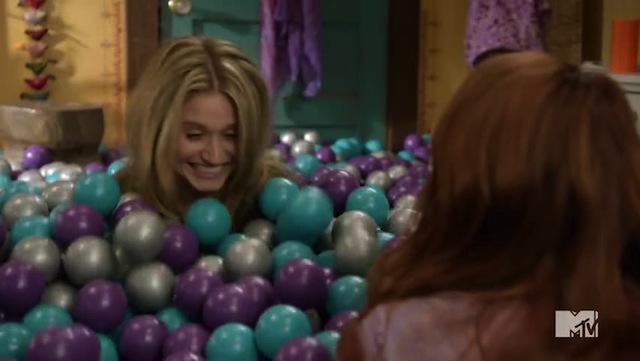 Karma’s super into this thematic extravaganza, but not when she learns her next clue is on one of these ten thousand balls. Now she’s gonna have to rub her whole face in a bunch of balls ’til she finds the right one, which is good practice for dating. With Amy turned the other way, Karma tries to snatch Liam’s card out of Amy’s bag but Amy catches her in the act. 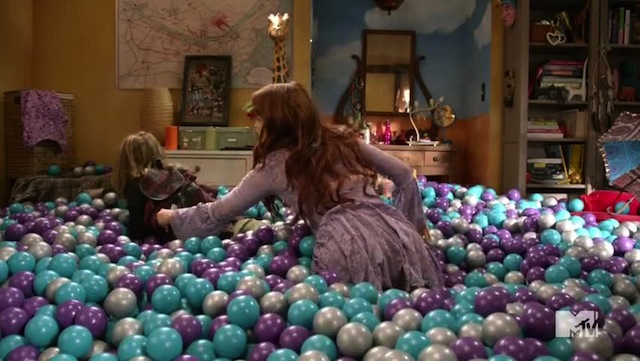 Karma insists the card’s from Erma the Lunchlady, but it’s pretty clear that Amy knows better. Amy reminds her that cards and presents are post-cake activities so Amy’s hanging on to it until then, because we’re all twelve.

Back at Mixed Martial Arts, Lauren and Shane show up ready to whack off and bust some balls and punch some lights out and expand their muscles and tendons and bones and stuff. 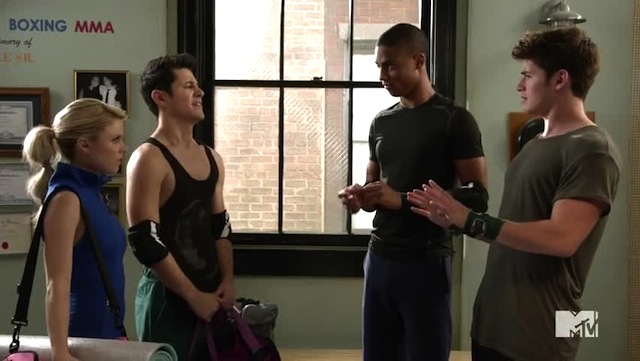 Shane says he senses chemistry between Theo and Lauren, but Theo tells Shane to butt out. Speaking of butts:

Shane: I was wrong about one thing, this class isn’t too straight, it’s the gayest thing I’ve ever seen. 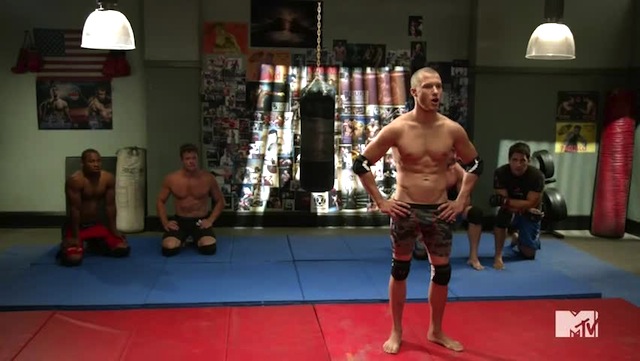 Yes, I got these underpants at Target. Next question?

Back in the Mature Friendship Corner, Karma and Amy have just painted ceramic unicorns and snuck into a PG-13 movie, and Karma’s clearly Over It and being pretty rude. Amy keeps trying to keep spirits high and keep the plan in motion, but it’s clear she’s frustrated by Karma’s apparent desire to be anywhere but where she is. 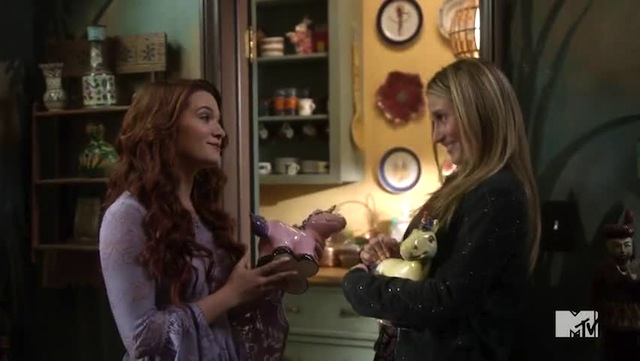 I know you know that I love sticking foreign objects up my butt during sex but this unicorn horn was truly something special.

The next stop on Karma’s Magical Birthday Mystical Tour is a tea leaf reading from good ‘ol Aunt Sage, who’s come all the way to Austin just for Karma’s sweet sixteen! Molly’s thrilled. Karma’s ravenously obsessed with getting her hands on Liam’s birthday card and rolls her eyes when acknowledging Aunt Sage’s Tea Reading is a throwback to her Sweet Thirteen. 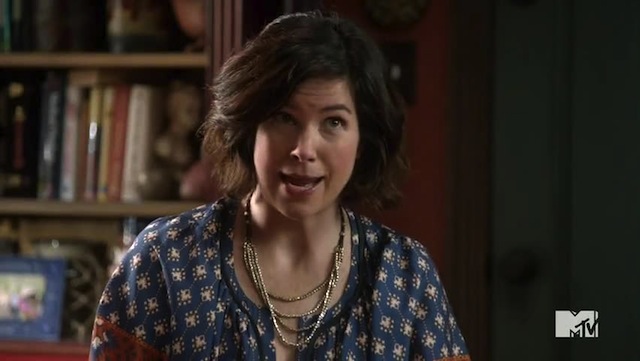 Now “Aunt” Sage, tell the class how many fingers you fit inside my vagina last night 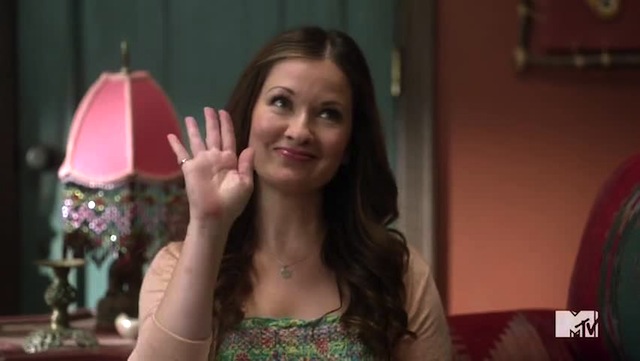 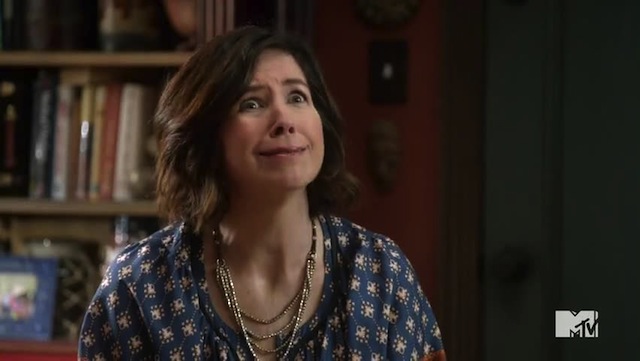 FIVE! Can you believe it? On her first time! 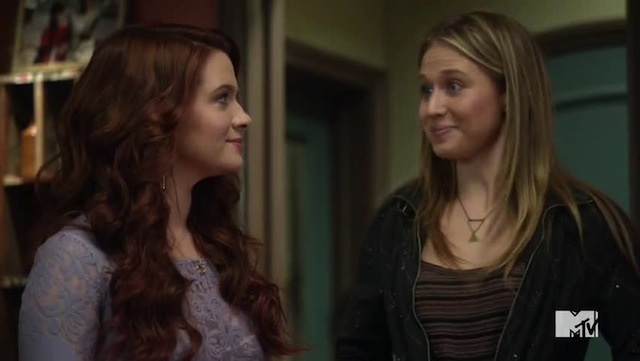 Welp, that’s the last time we ask your mother how she’s doing today

Aunt Sage: It appears the universe has a very important message for you about your one true love.
Karma: Well tell the universe I can’t wait to find out what it says!
Aunt Sage: NOT SO FAST! A force is trying to keep the message from you, standing between you and your love.
Molly: Well what could it be, they’re sitting right next to each other!
Aunt Sage: Whatever it is, act now! Before it’s too late!

In a hot panic, Karma rushes to the bathroom, snatching Amy’s jacket to help with the “draft” and cursing the heavens when her Love Note From Liam’s not in there anymore. Amy then strolls around the corner and catches Karma in the act. Amy’s like, I doubt that the card says anything more than “Happy Birthday,” but Karma says they have to retrace their steps until they find the letter because the lunch lady has a poet’s soul. 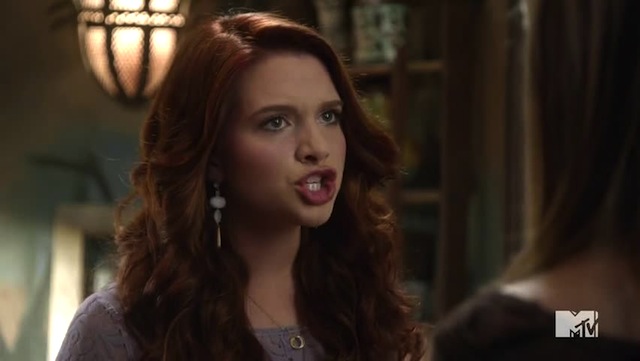 Back at the Martial Arts Fun Fair, Liam’s not having fun ’cause they’re just tossing balls around instead of punching people in the face. Shane’s having fun because he’s certain that he recognizes Duke, the super famous MMA instructor, from Grindr. Shane has a photographic memory for abs, like how I have a photographic memory for which Yogurtland has the freshest bananas. 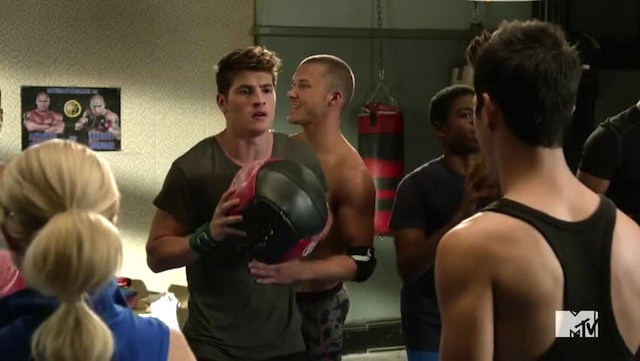 Theo insists Duke can’t possibly be gay ’cause he’s got a reputation for being a “hound dog” who likes “pussy cats, not the rooster.” Theo and Shane put $50 on the accuracy of Shane’s gaydar. Then Theo and Lauren throw balls at each other. Theo’s impressed by Lauren’s strong pitching arm, commenting that there’s more to Lauren than her “dainty and feminine” presentation. Lauren panics that Theo’s referencing Lauren being intersex and flees the scene. 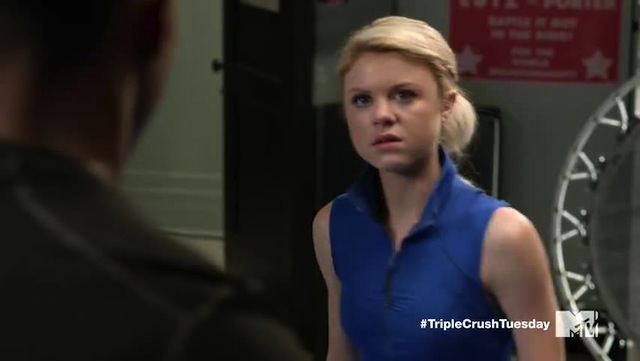 How DARE you compare me to Quinn Fabray, I’d NEVER text and drive